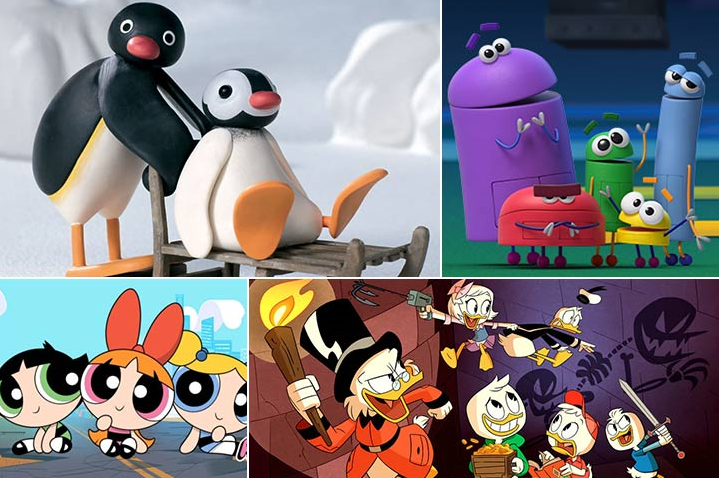 If we’re discussing our favorite cartoons, then first we have to narrow them down by category. Oldies cartoons like Roadrunner and Tom & Jerry are some of the best cartoons that even our parents remember watching, and of course, there are the classic Disney Channel cartoons. However, Cartoon Network is in a category all of its own. With a unique illustration technique and interesting way of teaching lessons, Cartoon Network has famously produced some favorite cartoons over the years that millennials are still fond of.

Finn is just a normal kid who lives in the post-apocalyptic Land of Oxo. Except, he’s not actually all that normal. With the help of his shape-shifting dog named Jake, the two fight a slew of enemies on their adventures and rescue those in need. They also meet several interesting characters like Princess Bubblegum. Though it’s a happy series, there’s a strange sense of darkness that the show has given that it is set many years after a nuclear war has occurred. Beloved by many, Adventure Time lasted for several series and premiered its ninth and final season in 2018.

C’mon, what little girl didn’t love this cartoon growing up? When you combine sugar, spice, and everything nice, you get – The Power puff Girls! A set of kindergarten superheroes, these tough gals named Blossom, Bubbles, and Buttercup protect their city from the evil villains who attempt to wreak havoc. Along their crime-fighting way, they encounter other normal issues like losing baby teeth and arguing with each other and look totally adorable while they do it!

With the good looks of Elvis and the wits of a bag of bricks, clueless but charming Johnny Bravo navigates everyday life and its accompanying issues while trying – and failing – to pick up women. While arguing with his child neighbor Suzy and running into problems with kids, animals, and adults, Johnny has some interesting run-ins and adventures in this hilarious but short-lived cartoon.

Stephen Universe changed the game of cartoons by offering hilarious and interesting content that also tackled some serious issues that children will eventually face in life. With detailed storylines and characters that broach the nuances of gender, sensual orientation, body type, and race, this cartoon features coming-of-age themes as well as unique family units that teach love and acceptance to the viewers.

Dexter is a child genius who spends most of his time in his laboratory cooking up new experiments and inventions. His ditzy sister Dee Dee often lands him in hot water when she sneaks into his secret lab to mess around with his things, but Dexter himself causes just as much trouble for his family and his arch-enemy Mandark when his experiments go awry on their own.

Courage may be cowardly, but he is usually the hero of each episode of this crazy, eccentric series. With his clueless owners Muriel and Eustace never really knowing what’s going on around their home, Courage is left to fend for himself and keep them safe from the various monsters, aliens, and other creepy creatures that wander nearby. A rather dark cartoon set in the middle of nowhere, Courage the Cowardly Dog ran for about four seasons before coming to an end in 2002.

The Grim Adventures of Billy And Mandy

When the Grim Reaper becomes the friend and lifelong servant to two children named Billy and Mandy, the kids realize all of the fun they are about the have with Death’s supernatural abilities. As they bounce around while Death acclimates to his new life among humans, Billy and Mandy encounter several notorious monsters like Dracula, The Wolfman, and even Jack O’Latern, and immortal human.

Ben Tennyson is very much unlike your average 10-year-old kid. With his special watch called the Omnitrix that can transform him into different alien life forms and the help of his grandfather Max and big sister Gwen, Max fights other aliens attempting to invade and does everything he can to keep the watch out of the bad guys’ hands. As the series went on, Max and Gwen soon had their own backstories and Ben had many more aliens he could become via his watch.

If you had an imaginary friend growing up, then you probably loved this cartoon. When eight-year-old Mac is told that he has to say goodbye to his imaginary friend, Bloo, Bloo goes to a special orphanage created specifically for imaginary friends. However, with the rules of the home stating that Bloo can stay as long as Mac visits him every day, the two forms an even deeper bond than what they’d had before as they encounter other colorful characters along the way.

Samurai Jack follows the story of a young samurai and his fight to undo the evil mess created by a shape-shifting demon called Aku. Featuring time-travel, supernatural elements, and dystopian adventures, Jack faces a series of intense obstacles as he tries to find a portal to take him back in time to before Aku messed everything up.