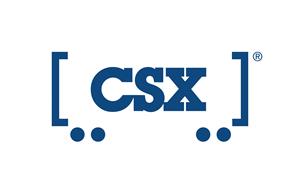 CSX Corp. announced third quarter 2020 net earnings of $736 million, or $0.96 per share, versus $856 million, or $1.08 per share in the same period last year. Despite lower economic activity resulting from the COVID-19 pandemic, CSX’s operating ratio of 56.9 percent remained in line with the prior year’s record results.

“I am incredibly proud of how CSX’s exceptional team of railroaders continues to deliver against the challenges this year has presented,” said James M. Foote, president and chief executive officer. “Their hard work allowed CSX to efficiently absorb the record rebound in volume while maintaining high levels of customer service.”

Revenue for the third quarter decreased 11 percent from the prior year to $2.65 billion, as intermodal volume growth was more than offset by declines in coal and merchandise volumes as well as lower fuel surcharge revenue. Expenses decreased 11 percent year over year to $1.51 billion, driven by continued efficiency gains and volume-related reductions. Operating income declined 11 percent for the quarter to $1.14 billion compared to $1.29 billion in the same period last year.

This earnings announcement, as well as additional detailed financial information, is contained in the CSX Quarterly Financial Report available through the company’s website at http://investors.csx.com and on Form 8-K with the Securities and Exchange Commission.

About CSX and its Disclosures

CSX, based in Jacksonville, Florida, is a premier transportation company. It provides rail, intermodal and rail-to-truck transload services and solutions to customers across a broad array of markets, including energy, industrial, construction, agricultural, and consumer products. For nearly 200 years, CSX has played a critical role in the nation’s economic expansion and industrial development. Its network connects every major metropolitan area in the eastern United States, where nearly two-thirds of the nation’s population resides. It also links more than 230 short-line railroads and more than 70 ocean, river and lake ports with major population centers and farming towns alike.

CSX reports its financial results in accordance with accounting principles generally accepted in the United States of America (U.S. GAAP). CSX also uses certain non-GAAP measures that fall within the meaning of Securities and Exchange Commission Regulation G and Regulation S-K Item 10(e), which may provide users of the financial information with additional meaningful comparison to prior reported results. Non-GAAP measures do not have standardized definitions and are not defined by U.S. GAAP. Therefore, CSX’s non-GAAP measures are unlikely to be comparable to similar measures presented by other companies. The presentation of these non-GAAP measures should not be considered in isolation from, as a substitute for, or as superior to the financial information presented in accordance with GAAP.