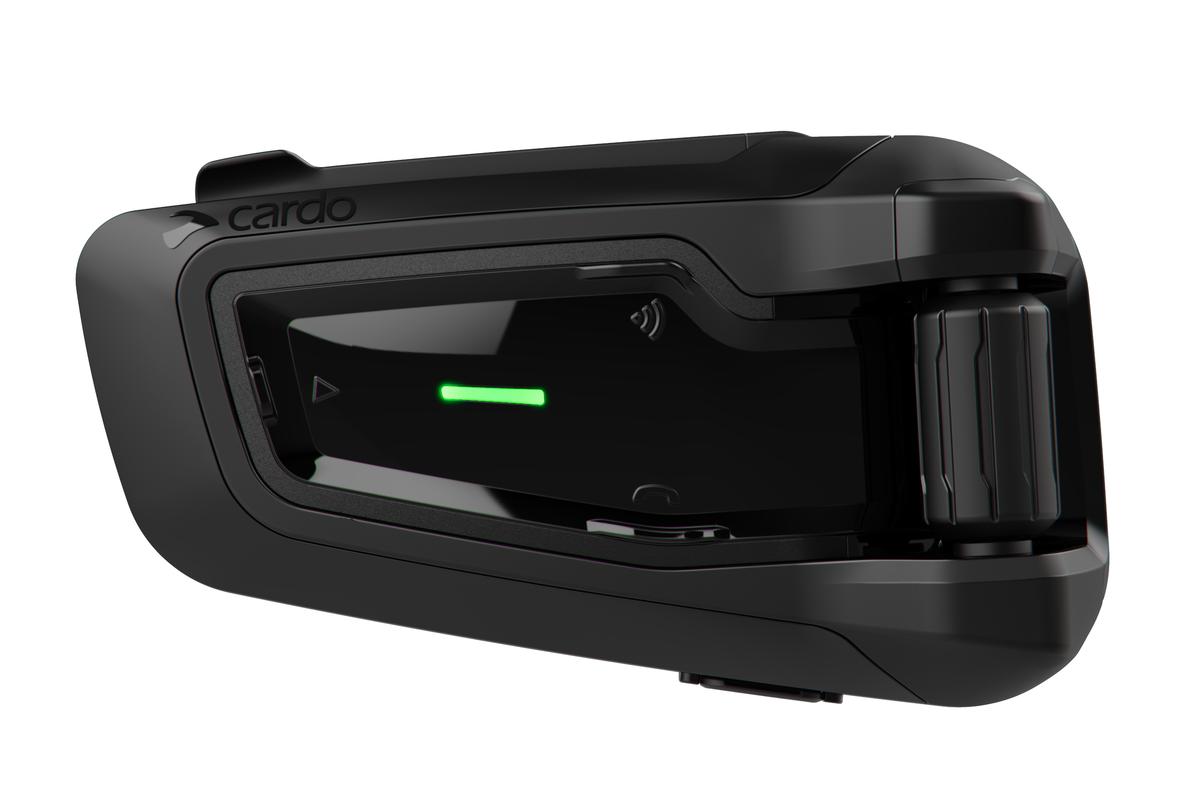 Texan company Cardo has been building Bluetooth headsets for motorcyclists ever since it pioneered the idea way back in 2004. Cardo had the first integrated FM radio in 2005, the first rider-to-rider intercom in 2007, the first mile-plus intercom in 2009, and in 2015 came out with Packtalk, the first mesh network headset, which meant large group conversations were no longer cut off when a single master headset went out of range.

A pretty impressive history of innovation, and today the company announced it’s putting audio under the spotlight with the release of a new top-shelf special edition called the Packtalk Black. Since last year, Cardo’s top line headsets have featured 40-mm JBL speakers. The Black edition takes things up a level by going to 45-mm speakers.

What’s the big deal? Well, these kind of helmet Bluetooth kits operate under some pretty unique and difficult conditions. Unlike regular headphone users, many motorcyclists tend to wear foam earplugs to cut down on ear-damaging wind noise at speed. That wind noise, plus road noise and engine sound, is competing for space in the audio spectrum as well, and the speakers have to be small enough to fit in the helmet shell without compromising safety.

As a result, most of them have a rather anaemic bottom end. This doesn’t affect podcasts, audiobooks, phone calls or intercom chats that much, but for riders that like listening to music, you often don’t get much bass. A larger speaker driver like the one in the Packtalk Black could go some way toward addressing the issue and we’d be keen to see how it performs on the highway.

Like the Packtalk Bold, the Black lets you form mesh networks with up to 15 other riders, letting you all gasbag your way up the highways in a reasonably tight group. When you hit the twisties and things start to separate out, the mesh network divides and riders can speak to those close to them on the road, until everyone catches up.

There are still people who hate the idea of a Bluetooth headset on a group ride; in my experience that usually shows they’ve either never tried it or it reflects on some of the company they’re keeping. These things open so many doors, from spontaneous route changes, fuel or snack stops to real-time coaching of less experienced riders. You can give your passenger a guided tour of your favorite roads, tell them to stop fighting the lean and apologize for any accidental jumps, wheelstands or stoppies.

You can warn your following buddies about diesel spills, cyclists, logging trucks or any number of other hazards. You can easily tag out if you want to concentrate or have some time alone in the saddle, and all the boring freeway trudges turn into road-trip chats with your mates. Frankly I’m amazed there are still riders that are ideologically opposed to this kind of tech, but everyone’s different.

The Packtalk Black is otherwise specified like the Bold, with a 13-hour battery, enough for a couple days on the road for most riders. It’s got universal connectivity, allowing it to interface with intercoms by other brands, and natural-language voice control to help keep your hands on the bars. Bike-to-bike intercom range is claimed at 1 mile (1.6 km) in perfect conditions and closer to 0.6 miles (1 km) in the real world; Cardo is adamant that its “real range” beats out anything on the market, which would presumably include the latest Sena 50S and 50R gear that claims a 1.2-mile (2-km) range.

Naturally, it interfaces with your phone, giving you access to any voice assistant you may prefer and the ability to make and accept calls, which can be routed in to join an intercom conversation. And an automatic volume control algorithm raises and lowers the sound levels depending on how much noise it’s competing with.

At US$390, it’s a solid 40 clams pricier than the Packtalk Bold (or the 50-series Senas for that matter), and Cardo is sprinkling a little sugar on that by offering a three-year warranty instead of the standard two years you get with the Bold. The Cardo Packtalk Black is available for pre-order now, with units starting to ship August 12.