What are the Key Factors Powering Revenue Growth in Global Anatomic Pathology Market?

One of the biggest factors resulting in the increasing demand for anatomic pathology services across the world is the escalating prevalence of chronic diseases, such as hypertension, cancer, heart diseases, autoimmune diseases, liver cirrhosis, and kidney diseases, especially in low- and middle-income countries (LMICs). According to a report of the World Health Organization (WHO), 9.6 million people died from cancer across the world in 2018. Furthermore, the report also states that almost 70% of the deaths from cancer occur in LMICs, which, in turn, boosts the demand for anatomic pathology screening in these countries.

The other key factor responsible for the growth of the anatomic pathology market is the soaring geriatric population across the globe. As per the World Population Ageing published by the United Nations (UN), the global geriatric population is predicted to increase from 703 million in 2019 to 1.5 billion by 2050. Additionally, the WHO reports that the prevalence of chronic diseases, such as depression, diabetes, organ failure, dementia, and pulmonary diseases, increases with age, which further pushes the need for efficient diagnosis, thereby propelling the volume of pathological tests.

Driven by the above factors, the sale of the various products used in pathology is expected to increase in value from $17.4 billion in 2018 to $24.3 billion by 2024, with a CAGR of 5.8% during the forecast period (2019–2024). Pathological screening is widely used for the diagnosis of diseases related to oncology, cardiology, nephrology, and hepatology, and in drug discovery. Of these, the higher usage of anatomic pathology is expected to be observed in disease diagnosis processes during the forecast period, mainly due to the surging geriatric population and rising number of patients suffering from chronic diseases. 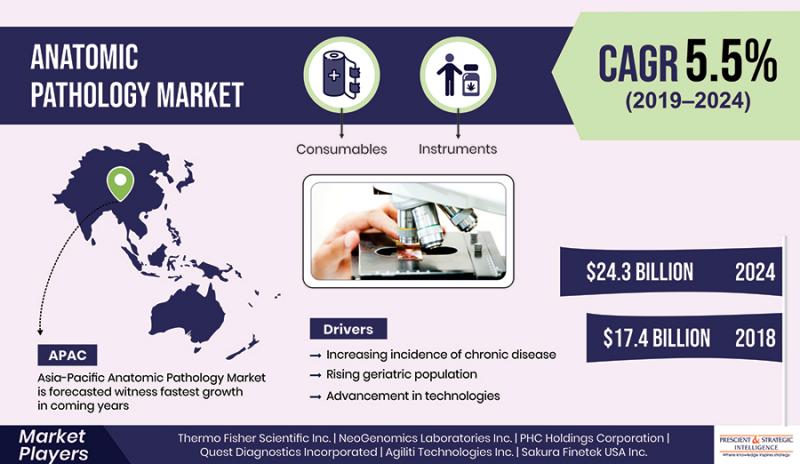 The biggest rage currently being witnessed in the anatomic pathology market is the heavy investments in the rapid development of new technologies, in order to speed up the disease diagnosis process. For instance, Greg Clark of the U.K. government announced in November 2018 that several consortium groups will together develop five new digital imaging and pathology centers, in various places in the U.K., such as Oxford, Glasgow, Leeds, Coventry, and London. The U.K. government, in order to make this possible, plans to invest $65 million from the Industrial Strategy Challenge Fund.

Geographically, the Asia-Pacific (APAC) region is expected to observe the fastest growth in the demand for anatomic pathology testing during the forecast period. The main factors contributing to the surge in this region are the rising acceptance of personalized medicine, mushrooming patient pool suffering from chronic diseases, increasing investments by the governments of various APAC countries, as well as numerous non-government organizations, on diagnostic research, and increasing penetration of major companies in the region, which provide products for pathological screening.