Five houses where the courtyard is the heart of the home 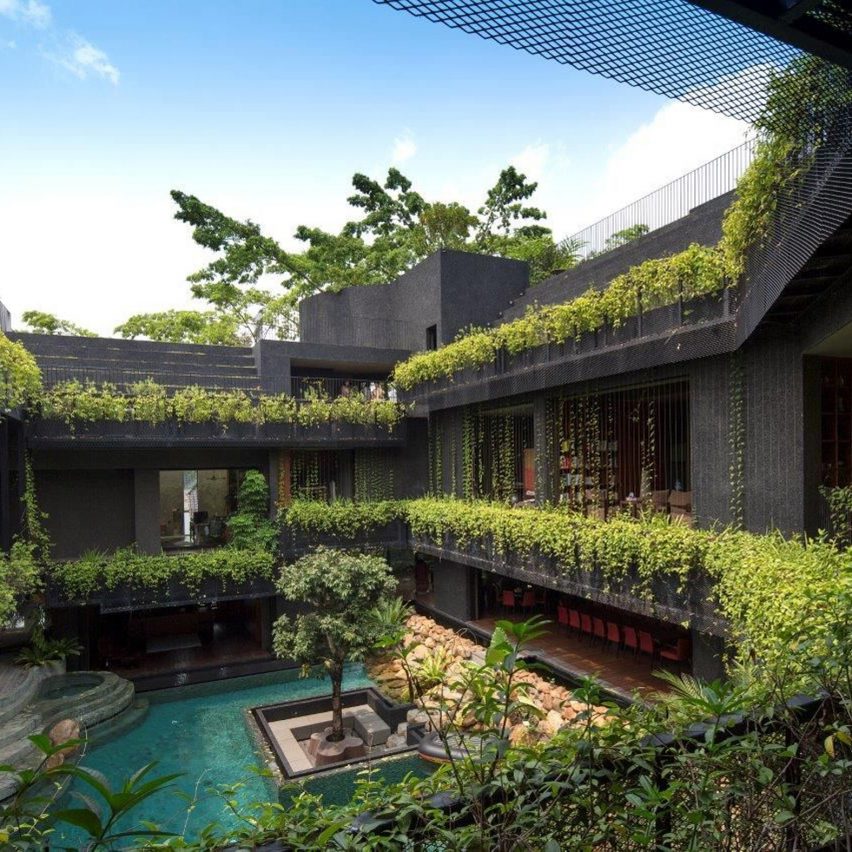 Charmaine Chan has highlighted 25 recently completed courtyard houses for her book Courtyard living: Contemporary houses of the Asia-Pacific. Here she picks five of the most interesting.

As the book’s title suggests, Courtyard living: Contemporary houses of the Asia-Pacific is a compilation of houses completed in the past 10 years across Asia and Oceania that are focused around an internal courtyard.

“What fascinates me is that courtyard houses can be found throughout the world – in the Middle East, China, north Africa and elsewhere – and that the typology has survived since antiquity,” Chan told Dezeen.

“One hypothesis is that it developed from the need to let smoke escape through a hole in the roof of a house with a central fireplace. Over time the roof opening became larger and courtyards were born.”

Chan, who is design editor of Hong Kong-based newspaper South China Morning Post, has been intrigued by the typology since visiting a mansion in Malaysia that was built around five courtyards.

“Twenty years ago, the Cheong Fatt Tze Mansion in Penang had a significant impact on me,” she explained. “A Chinese courtyard house built in the late 19th century to accommodate nine generations of Cheongs, the house was opened to visitors after its restoration in the mid-1990s.”

“For the only time in my life, I felt the energy of a building coursing through my body,” she continued. “The feng shui heart of the mansion is said to lie in the middle of its central courtyard and it is apparently from there that the greatest ‘chi’ radiates.”

Chan wrote the book while renovating her own courtyard home in Australia, which has been designed so that she can live with her parents – and both generations could still have their private space.

“More recently, I was drawn back to the typology because of the possibility of having to provide 24/7 care for my elderly parents, who live in Sydney, Australia, where I grew up,” she said.

“Living together but separately seemed like a good idea, and with courtyard houses making harmonious multigenerational living possible, I embarked on an architectural project of my own: 2 + 2 House, which is in my book, is the result,” she continued.

“Also, I craved the freedom that comes with privacy. Living cheek by jowl for years in Hong Kong made the idea of refuge desirable. But prospect, too, was important, especially in a seaside location: turning inwards while being able to observe the world are reasons I love my courtyards.”

The book is split into five chapters, which each focus on a different type of courtyard home. The “Private little worlds” chapter focuses on houses that have courtyards for privacy and security, while “The young, the old and the in-between” looks at properties where courtyards allow multigenerational families to live together.

In “Essential sightlines”, Chan focuses on houses that have been opened up to provide views, while in the “Air, light, shade” chapter the courtyards have been created to improve the internal climate of the home. Finally, “Blurring the boundaries” looks at courtyards that have been fully integrated with the home.

Read on for Chan opinions on five of the book’s most interesting houses, one taken from each chapter: 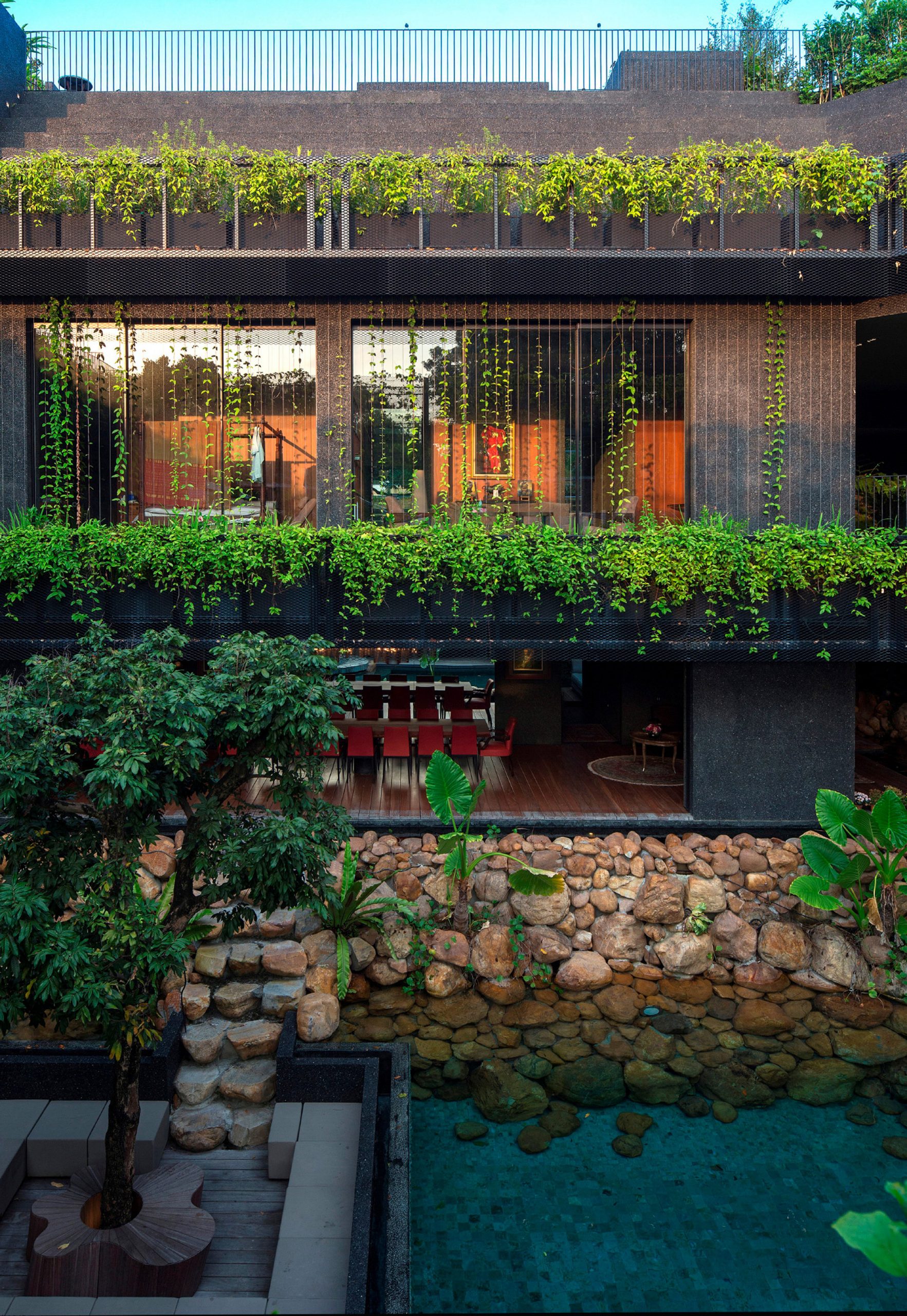 Photo is by Albert Lim

The young, the old and the in-between: Cornwall Gardens by Chang Architects, Singapore

Cornwall Gardens, in Singapore, allows four generations of a family to live with abundant flora around a large pool. Designed by Chang Yong Ter, the redeveloped home is a response to the owner’s desire to use greenery and water to create a cool, tropical paradise.

Positioning the rock- and palm-fringed pool in the middle allows interconnection among the rooms and full appreciation of its beauty: all six bedrooms and communal areas feel like box seats on Centre Court.

From its original L-shape, the house expanded into a U configuration, with a double-storey planter bridge linking the ends. The bridge connects young and old symbolically and physically. 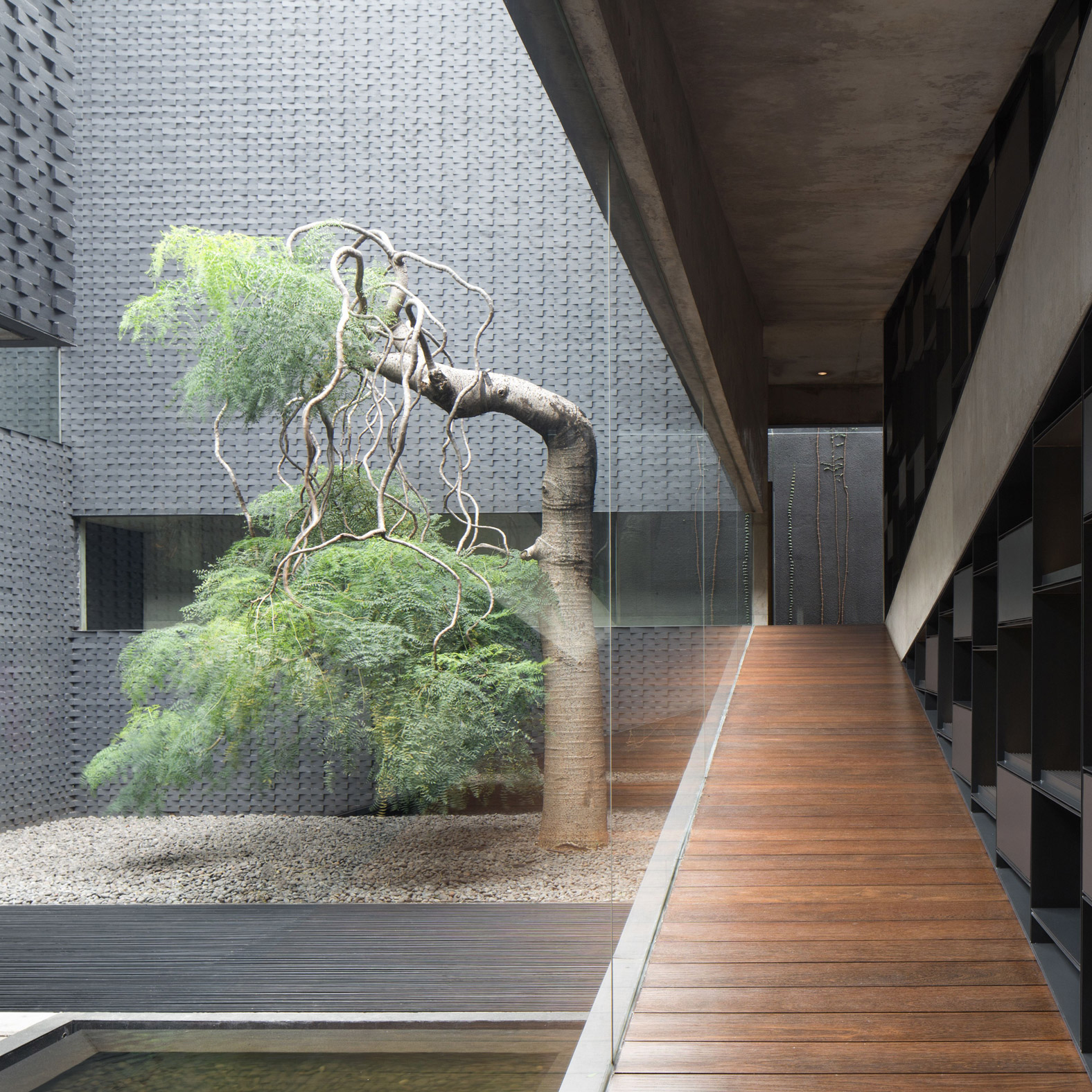 Photo is by Mario Wibowo

At AW House, Andra Matin used ramps to choreograph a route around the central courtyard.

He tried to make each floor feel like the ground floor. On exiting the children’s bedrooms on the first level, you come across a paddy field – it’s actually lemongrass in big planters. And on the roof, you see trees and an infinity pond on the border, which makes you feel grounded.

In this house, the doors can all be left open without compromising privacy. The moringa tree in the courtyard is the most memorable piece of art in a house full of artworks. 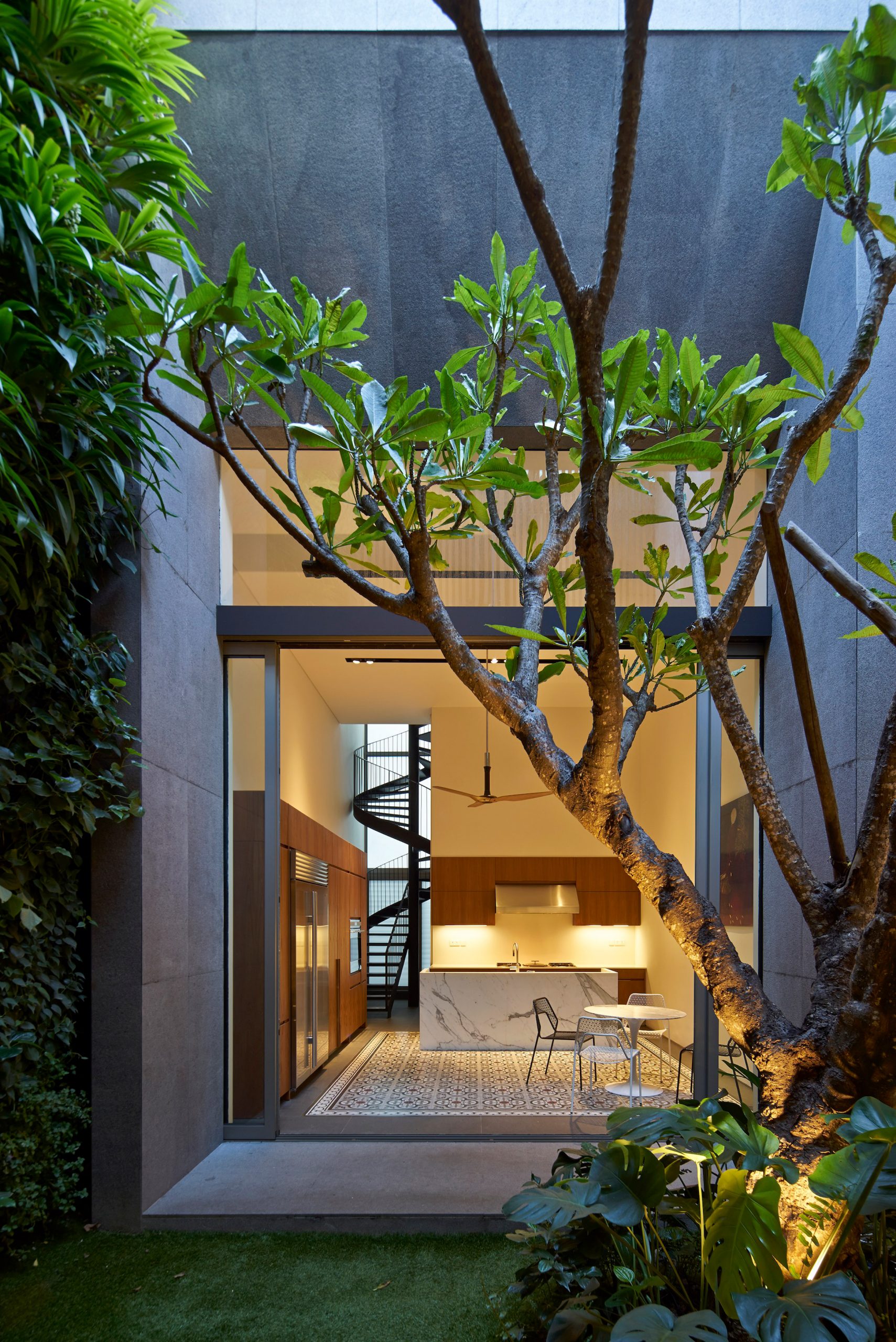 Photo is by Aaron Pocock

In its former life as a converted warehouse, all the courtyard elements had been removed from this early-20th-century Singaporean shophouse, such that the ground floor was a single, continuous space stretching the entire length of the property, from street to alleyway.

Little wonder the new owners chose to puncture the dark cocoon. Making the most of their unusually long plot, they opted for a generous patch of green between their front and rear blocks, providing a safe playground for their children.

The courtyard, a source of air and natural light, is the focal point of almost every room. “Architectural archaeology” enabled the architects to restore the courtyard faithfully. 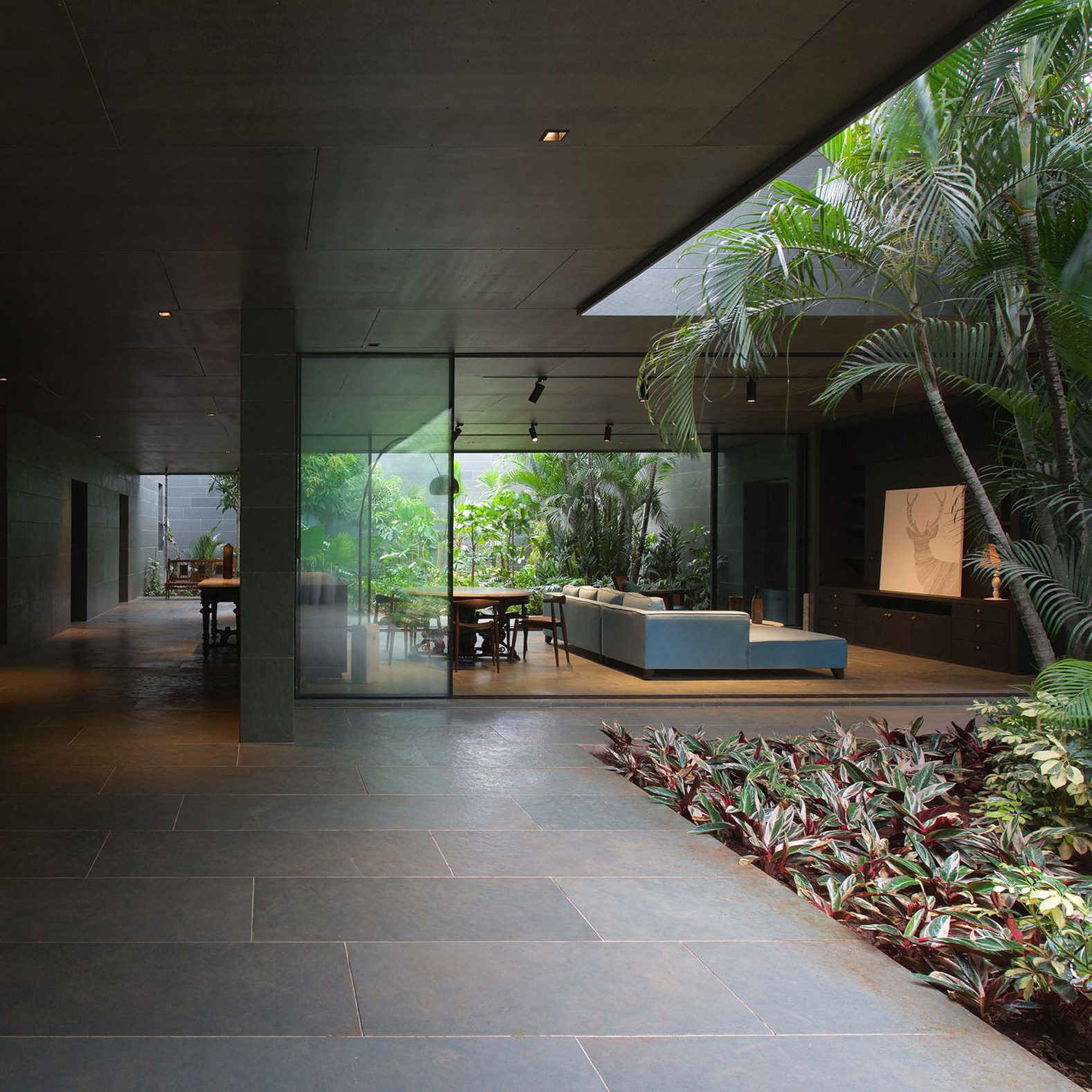 Photo is by Ira Gosalia and Sebastian Zachariah

On listening to the recording of my interview with architect Sanjeev Panjabi at Gomati House – in Malavli, India – I realised the stereophonic bird sounds were almost deafening. Our conversation had taken place in a family room downstairs flanked by lively courtyards. Inside and outside felt like one and the same.

When Panjabi visited the old house for the first time he immediately realised that it faced the wrong direction, neglecting about 50 mature trees in the grounds. He turned the new house the other way and wove it around the trees, using greenery in two courtyards to connect the two levels.

I loved that the rubble from the old house was retained to create a mound on the plot of land. The bottom floor, partially sunken into this mound, offers cool respite through its lushly planted courtyards. 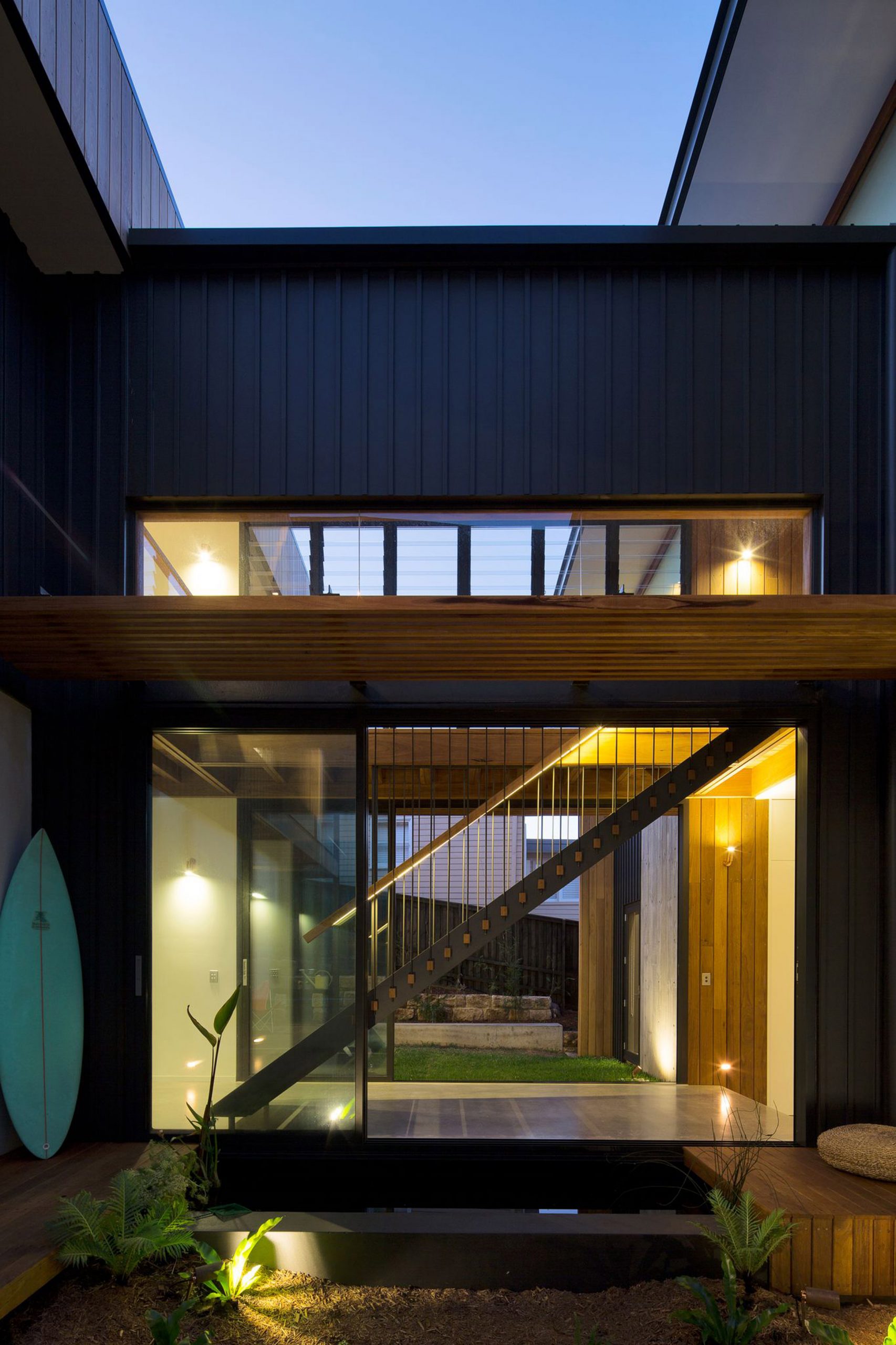 Photo is by Simon Whitbread

Prospect and refuge; public and private; rough and refined. These binary opposites find expression in 2 + 2 House, named after the wet and dry courtyards separating two pavilions.

The outdoor areas – one fern-filled, with water features; the other turfed – offer protection away from wild coastal winds that buffet the dumbbell-shaped seaside home, in Sydney, Australia. Intentionally room-sized, the inward-looking sanctuaries flow from a library/rumpus for all, and zones for the family alone.

Upstairs and down, from unobstructed vistas of the Pacific Ocean to flashes of surf through view corridors, every room retains a visual link to the coast, and that owes much to the courtyards.