The increasing pollution levels caused because of the large-scale usage of conventional fuels-powered vehicles and bikes are making the people switch to eco-friendly modes of transportation such as e-bikes. Additionally, the governments of several countries are increasingly implementing various incentives and policies such as subsidies or discounts on the prices of e-bikes, for promoting their adoption in the transport fleets. For instance, the Swedish government launched a subsidy of up to nearly $1,119 (or 25%) on the purchase of an e-bike for the following three years. 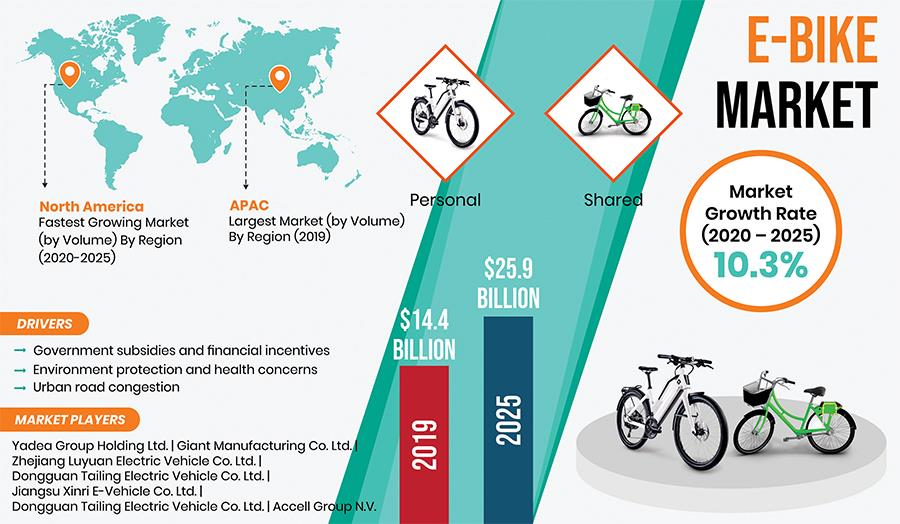 Due to this subsidy, there was a huge rise in the sales of e-bikes in Sweden, from more than 67,000 units to over 100,000 units from 2017 to 2018”. Besides the government subsidies, the increasing road congestion in urban areas and major cities and rising popularity of low-speed electric vehicles such as the pedal-assist e-bikes, especially for traveling short distances are the other major factors fuelling the sales of e-bikes across the world. These pedal-assist bikes also serve as good alternatives to cycling and are thus, becoming very popular amongst the ageing population.

Request to Get the Sample Report: https://www.psmarketresearch.com/market-analysis/e-bike-market/report-sample

The above-mentioned factors are predicted to cause the growth of the global e-bike market, in terms of value, from $14.4 billion to more than $25.9 billion from 2019 to 2025, as per the forecasts of P&S Intelligence, a market research organization based in India. The market is also expected to demonstrate a CAGR of 10.3% from 2020 to 2030. E-bikes are mainly used for personal commuting purposes and in bike sharing services and systems. Between the two, the personal ownership of these bikes was observed to be higher in 2019.

Geographically, the North American e-bike market will exhibit the fastest growth over the next few years. This is predominantly credited to the surging popularity of these bikes for short-distance commuting and trekking purposes amongst the people of various North American nations. In addition to this, the adoption of shared e-bikes is increasing at a lightening pace in North America, which is, in turn, boosting the demand for e-bikes in the region.

Hence, it can be said with conviction that the demand for e-bikes in market will surge all over the globe in the forthcoming years, mainly because of the increasing pollution levels and the rising enactment of favorable government incentives and policies in many countries around the world.