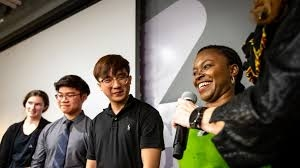 The program is free to join, teaches valuable skills, makes members and their marketable talents slightly famous, and most importantly, links each participant to a Cause permanently, because of its unique social networking capabilities.

“Protests are important, and we’ve  supported them in recent weeks” says DeMarcus Ambrose, the group’s Communications Director. “But at some point we have to stop pointing fingers and start building. Protests come from the conviction that OTHER PEOPLE are supposed to do something.  But sooner or later you realize that it’s YOU who will make your future, not other people. That’s the central premise behind Black Achievers Matter. With us you can’t complain about others, you have to CREATE something.”

There is an established protocol to follow: Each Ambassador creates both a Facebook Page and Group devoted to their group and cause, plus accounts or pages on Twitter, Instagram, Pinterest, Imgur,  Tumblr, academia.edu, and sometimes Youtube and TikTok.   They also start discussion groups on Reddit and Linkedin, and issue a press release.  “What this does, as they learn the requirements of each platform, is establish each participant as a matrix of knowledge, information, and  news for their topic, as far as the Internet is concerned. It also has the potential to  build a sustainable source of revenue for the non-profit” says John Toomey, Director of Advancement. If an Ambassador wishes, a networking award is named after them. The world will always be aware of their passion for the cause, and potential business partners, employers, or other NGOs  can easily evaluate their talents.

Ambassadors don’t pay to participate, but must start and  maintain the social network sites devoted to their group and issue.  Angels, who donate to the GoFundMe campaign, have it done for them. Successful Angels and Ambassadors are highlighted every month in a press release, and mentioned in the group’s social media which reach hundreds of thousands.

In addition, Angels can earn a Title associated with the cause represented by their chosen non-profit. They can join groups that guide the young Ambassadors, and have real administrative power within the organization.

The project was designed with the help of Fortune 500  executives  who wanted to  create an easily followed set of procedures designed  specifically for  young people of color to either build their own startups or join existing successful companies or non-profits.  “We want to introduce young people to skills which will eventually help them to build a research team, a customer base, a Board for a startup incubator, or a cohort of investors” says Program Director Soani Gunawan.

“We  want to combine the passion that young people have for Racial Justice and Cultural Diversity  with a series of steps that, though simple in themselves, can teach powerful lessons in networking, team-building, publicity, and marketing psychology” says Ambrose. “Those who succeed will be invited to build AI’s that achieve the same aim, while also introducing them to machine learning and neural networks. These are skills that can not only move the needle for social change, but help people succeed in enterprises also”.

Will participation in the program lead to lucrative employment in Silicon Valley or with successful organizations elsewhere? “That’s the long-term plan” says Gunawan. “We’ll see how this pilot project goes”.

Black Achievers Matter is supported by a GoFundMe page, which  pays for administration, advertising, site maintenance, and upkeep. Anything left over is donated to the 20 currently recognized non-profits.

“What this does is ensure that a Donor’s name is recognized forever” says Gunawan. “Their name is listed on our website and social media, as well as those of the Ambassadors they support, and on every monthly press release. The result is that support for BAM offers more ‘Bang for the Buck’ than other charities.  Both Angels and Ambassadors achieve continuous recognition.”

The GoFundMe page is gofundme.com/f/black-achievers-matter

This press release was issued through EmailWire.Com – the global newswire with press release distribution services. For more information, go to http://www.emailwire.com.