Strap in — a virtual Tour de France is coming this weekend 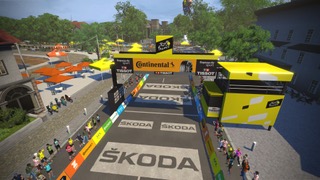 The pandemic has wreaked havoc on all manner of professional sports this year, and cycling has not been immune. For example, the best-known race on the planet, the Tour de France, normally staged in July, has had to be pushed back to August 29 through September 20.

That doesn’t mean that the world — and professional cyclists — can’t enjoy world-class racing this summer. In fact, beginning this coming weekend, 23 top men’s teams and 17 women’s teams will participate in a virtual version of the event that’s being hosted by six-year-old Zwift, after it was chosen by the official race organizer of the real tour, Amaury Sport Organization (ASO), as its partner on the event.

It’s a coup for the Long Beach, Calif., company whose multiplayer video game technology is used by both amateur and pro cyclists and that, according to Outside magazine, is now the biggest player in the growing online racing world.

Investors have noticed, funding the company to the tune of $170 million so far, says cofounder and CEO Eric Min.

This Tour has the potential to drive many more users its way, too.

For one thing, the virtual version of the event, which will feature six stages that last roughly hour over the next three weekends beginning this Saturday, will be broadcast in more than 130 countries. (The race gets underway with the first women’s stage, followed immediately by the men, and will be broadcast on NBC Sports here in the U.S.)

It’s hard to imagine another way for a company like Zwift  to get so much exposure as quickly.

The race is also open to any cyclists on its platform who want to race on the same roads as the professionals, meaning anyone who wants to “compete” in this virtual tour needs to sign up for an account, though it’s worth noting a few things.

First, mere mortals won’t be racing at the same time as the cyclists in the Tour but during mass participation events during the week that will ostensibly provide them the chance to experience exactly what the pros went through and to compare their power, heart rate, cadence and other data to their pro rider heroes. 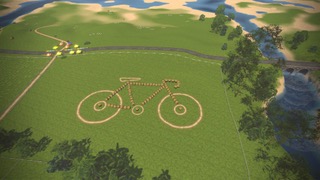 Also, Zwift is a subscription service. Users can check out the platform for a free, seven-day trial, but after that, Zwift charges $15 per month. Riders also need a smart trainer, which costs around $300. Zwift doesn’t make its own trainers — yet — but its software works with the hardware of a dozen or so companies.

Unsurprisingly, Min sounded both excited and terrified when we caught up with him last week to talk about the race, whose first two stages will be held in Zwift’s existing game world, Watopia, with the other stages orchestrated in virtual versions of real courses from the race.

Though Zwift has staged virtual races before —  including the Giro d’Italia, which is basically the Tour de France for Italy, and the Vuelta a Espana, an annual multi-stage race in Spain — it “doesn’t get any bigger than this,” said Min, who told us the idea was hatched six weeks ago with ASO and that Zwift has been working furiously to prepare for the race ever since.

It could prove a turning point for the outfit. It already has nearly two million accounts, and while subscribers ebb and flow, depending on the time of year, the virtual Tour is an opportunity for some of those riders to “reengage,” Min says, adding that Zwift has been growing 50 percent year over year, and has unsurprisingly seen pick-up accelerate throughout the pandemic.

Zwift doesn’t just cater to competitive athletes, Min stresses, saying that more than half the company’s customers are overweight and that, unlike Peleton, its customers are drawn less to particular instructors and more to the idea of being part of a club where they can train, take part in events, and compete with one another another, either in a public way or by via private rides wherein users share maps with friends, for example.

Either way, both amateur rider and professional racers will undoubtedly have high expectations of the Tour itself, even while it comes with more inherent challenges, including less time to break away from fellow riders than in the real-world tour, where each stage can take five or six hours.

Min thinks Zwift is ready. On our call, he discussed how Zwift convincingly creates drag, for example, walking through the software’s calculations, including a rider’s weight and body mass and the terrain they’re on and whether a rider is receiving draft from riders in front. Apply resistance to the machine  or easing it is what gives riders a sense of motion and inertia. “It’s not exactly like outdoor riding,” said Min, but combined with the software’s visual tools, meant to fool the mind, “it gets pretty darn close.

And that software, including the Tour maps, is now largely done, Min said. Now, Zwift just needs to ensure that its broadcast tools work as well as possible, among other last-minute priorities.

“We’ll do some dry runs [this] week. Then it’s showtime,” he said, before adding: “The stakes are pretty high. It has to be rock solid.”