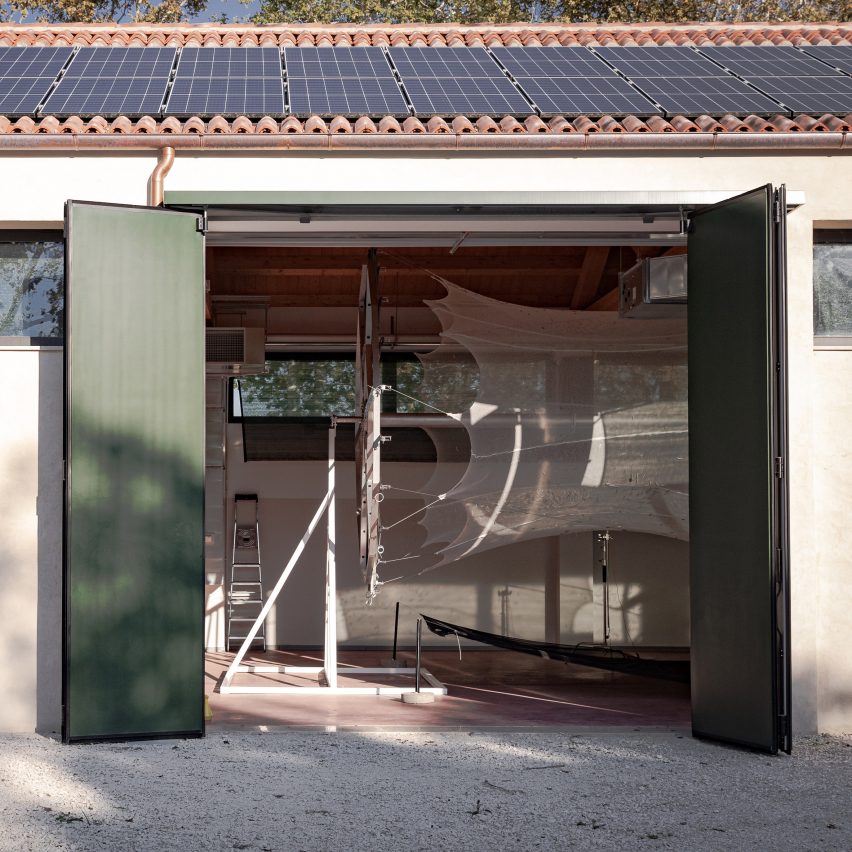 Neri Oxman has released a film of a silkworm-woven pavilion in Italy, in which the insects acted “not only as construction workers but also as designer”.

The American-Israeli designer created the seven-minute-long movie for a website launched to digitally present the projects on show at the Material Ecology exhibition at New York’s Museum of Modern Art.

The exhibition opened in February this year featuring a body of works by her Mediated Matter Group research department at Massachusetts Institute of Technology, but was forced to close due to the coronavirus pandemic.

A large robotic, loom-like jig was installed in a fabrication facility in Abano Term

The film shows for the first time the making of the Silk Pavilion II, which was the centrepiece of the New York showcase.

It begins in Italy with a facility in Teolo where 17,532 silkworms were sourced for the project, and then moves onto the installation of a large robotic, loom-like jig in a fabrication facility in Abano Term, where the silkworm-spun pavilion was made in 10 days.

After the jig is built, a soluble white knit is stretched across to form a base for the silkworms to lay their silk. The kinetic jig was programmed to periodically rotate in a clockwise motion so that the silkworms are forced to work in an upward spinning motion and lay evenly over the structure. 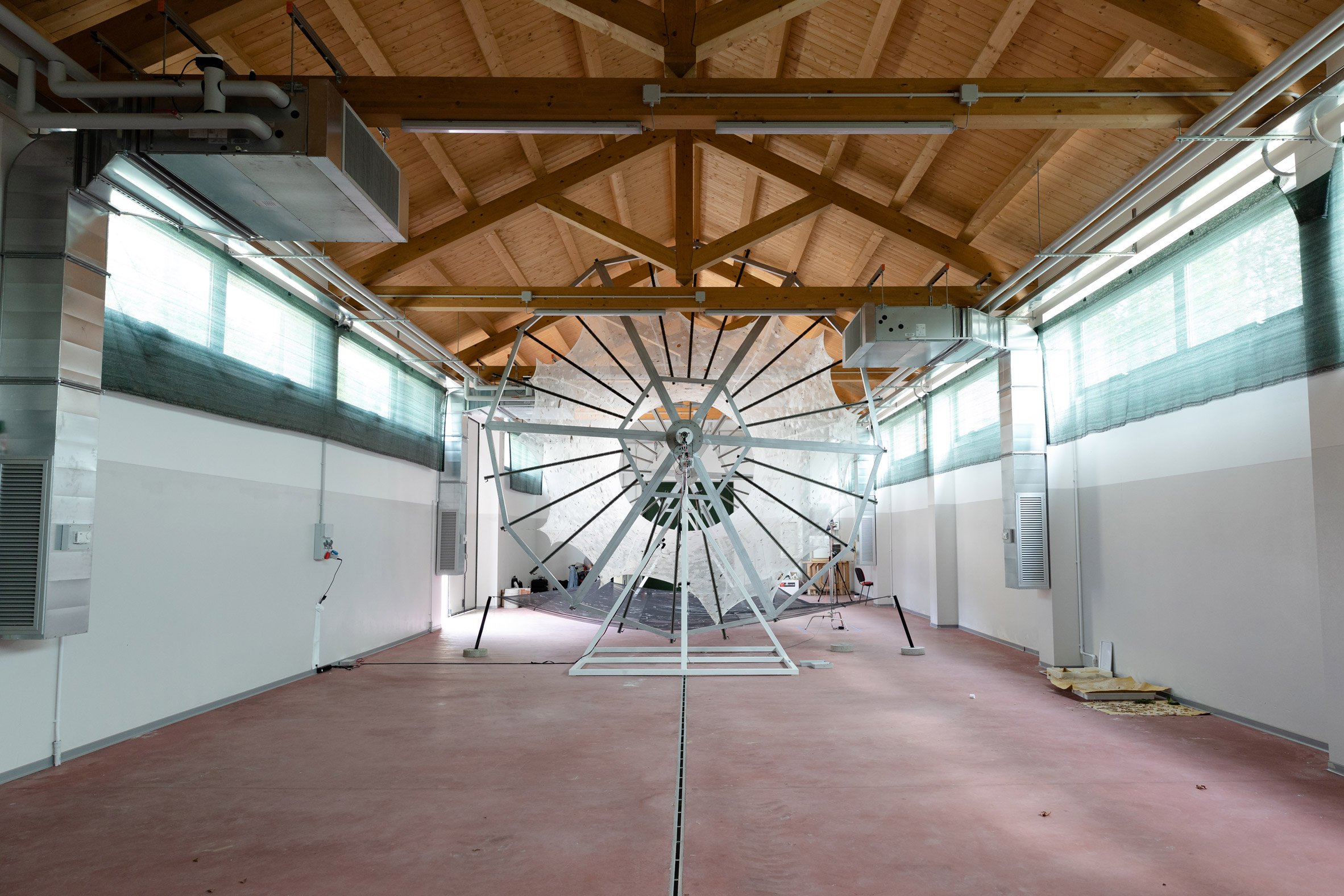 Oxman said this process provides an alternative to traditional harvesting of material from silkworms, in which the larva are typically killed.

“As the Silk Pavilion demonstrates, structures can influence silkworms to spin in sheets instead of cocoons,” Oxman added.

“This project illustrates how this small, yet unique insect can act not only as construction worker but also as designer, in collaboration with a man-made structure that guides its movement and deposition of silk to create an enhanced form.” 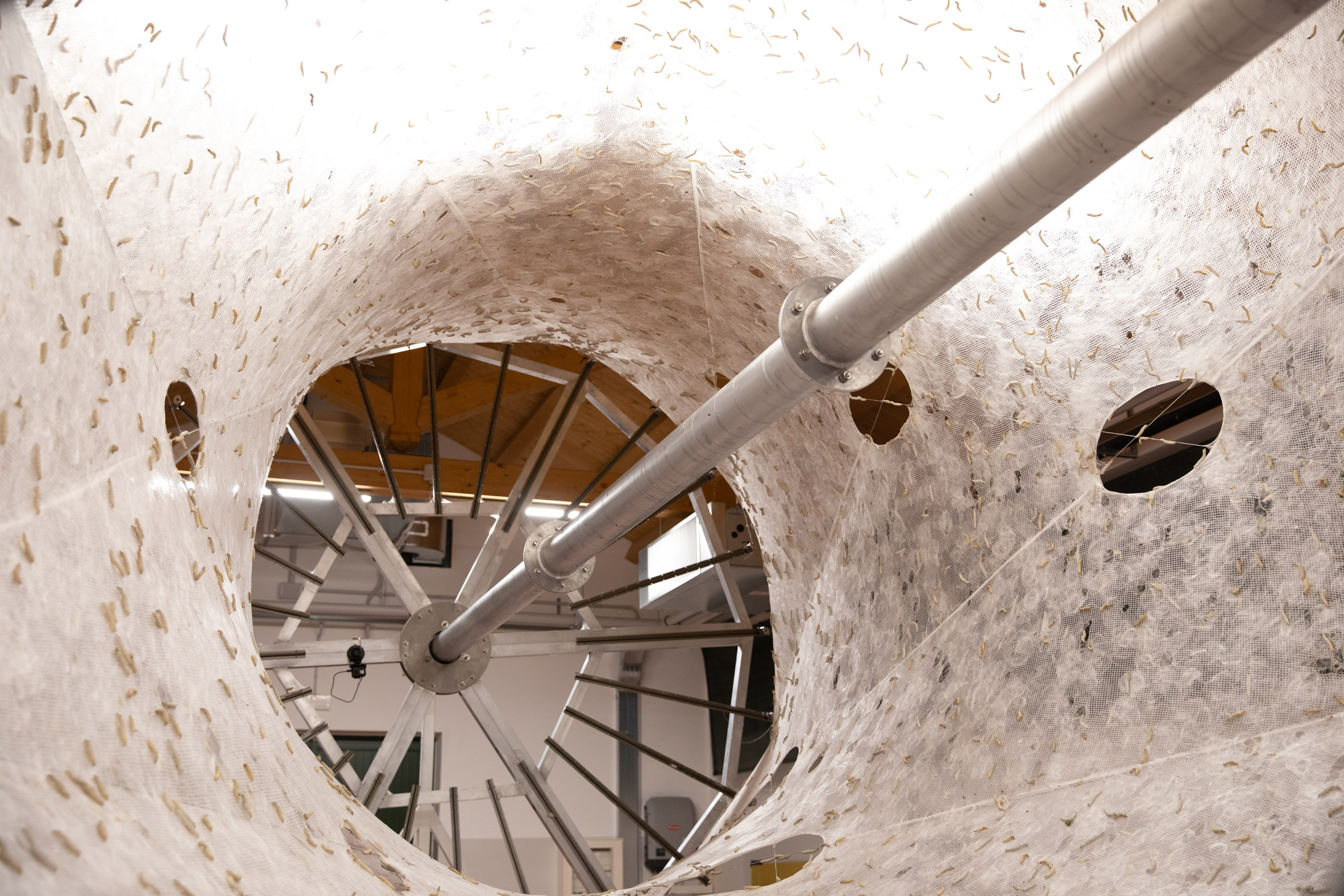 The team installed a net underneath the jig to safely catch the silkworms as they metamorphosis during the process.

In total, there were over 15,000 rotations to create the pavilion in a horizontal format before it was then transported to New York City. It was then hung vertically in the Museum of Modern Art rising six metres tall and spannings five metres wide.

Oxman’s website also includes the other projects that are featured in the Material Ecology such as the first Silk Pavilion that Oxman created in 2013.

Others are the Totems sculpture built with melanin and Aguahoja, a five-metre-tall pavilion that was robotically printed out of a biocomposite made of pectin, cellulose, chitosan (a material derived from chitin) and calcium carbonate.

Aguahoja was awarded the Dezeen Awards 2019 design project of the year for demonstrating how these materials could be combined to create objects on an architectural scale. 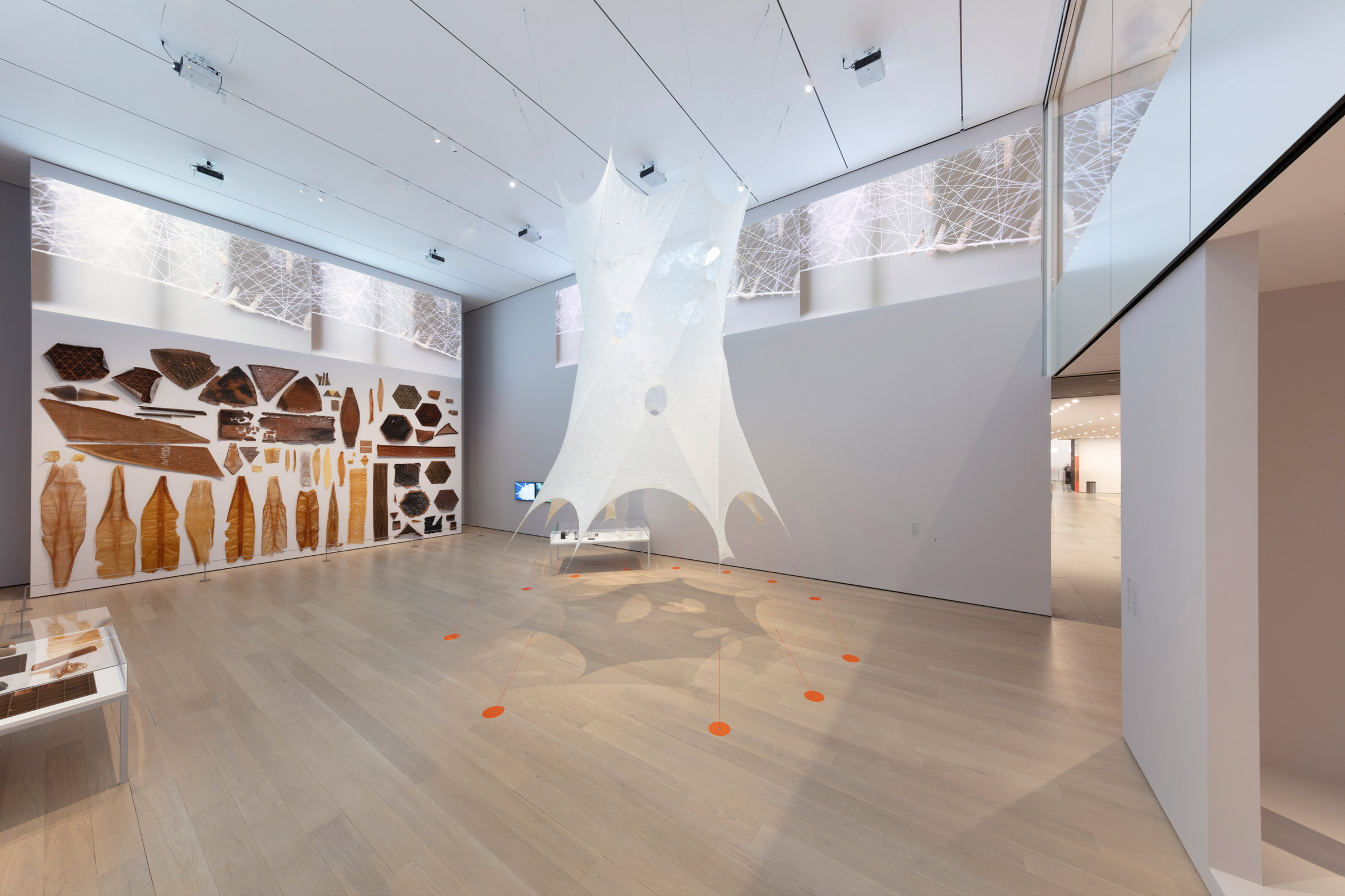 Oxman details the method for creating Aguahoja, called water-based digital-fabrication, in the Platforms section of the website, alongside other technologies she has developed with her MIT team to make the different projects.

Material Ecology opened on 22 February and was expected to run until 25 May before MoMA closed in early March due to the spread of coronavirus in New York City. The exhibition presented seven key projects.

Oxman, who was born in Haifa, Israel, moved to the US to study at MIT in 2005 and became a professor in 2010, when she also founded the university’s Mediated Matter Group.

She was also selected to present projects in New York’s Cooper Hewitt design triennial and featured in the second series of Netflix’s show Abstract about the world’s most innovative designers.