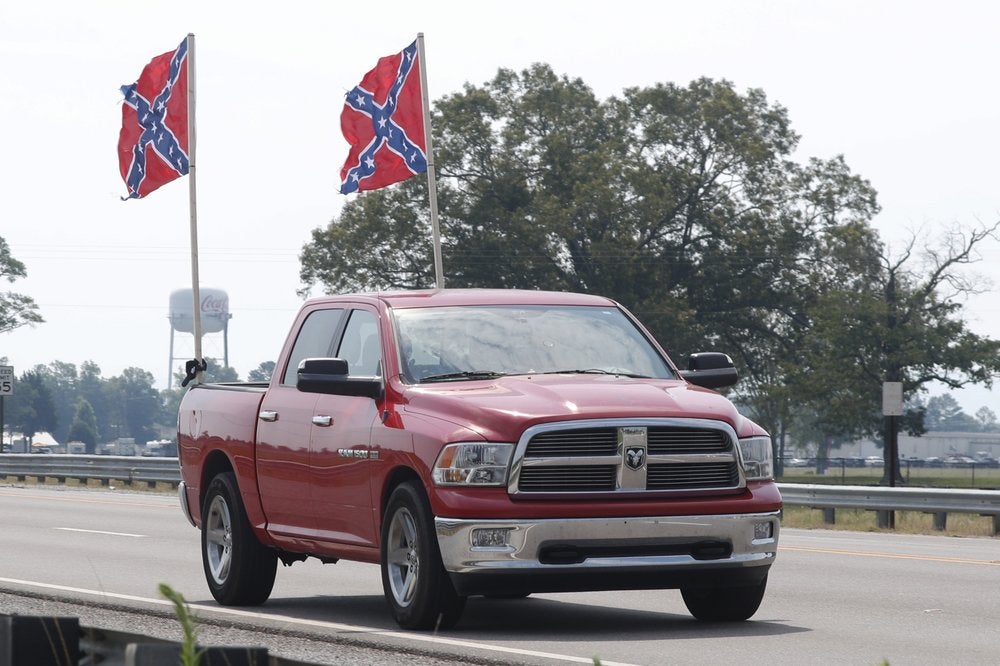 A truck flying Confederate flags passes by the Talladega Superspeedway prior to the NASCAR Cup Series auto race at the in Talladega Ala., Sunday June 21, 2020 (AP Photo/John Bazemore)

TALLADEGA, Ala. — It cost $40 to get into Talladega Superspeedway if you were one of 5,000 people to purchase a ticket and live within 150 miles of the NASCAR staple.

But to get to the seat in Row 26A, Seat 12W, you first had to weave down Talladega Blvd., perhaps passing dozens of people lining the road and proudly waving the Confederate flag.

Look up, and you might spot a plane pulling a banner of the Southern symbol, now banned from being displayed inside race tracks, with the words “Defund NASCAR”.

The Confederate flags that once flew openly around the infield and stands are still for sale across the street. NASCAR hasn’t disclosed how it will handle fans flying flags.

The race was pushed back to Monday afternoon because of heavy rain and lightning. But before the rain came, the scene was a dramatic departure from the Talladega norm.

Radvansky, who started coming to Talladega in the 1990s when his father parked cars at races, applauded NASCAR’s decision to ban the Confederate flags.

“I don’t think there’s a place for it in NASCAR, to be honest with you,” the 32-year-old said. “That doesn’t sit well with all the good ole boys but it is what it is.”

Fans had to go through screening and wear masks to get in for the race, though a few were walking around inside without theirs on. But lines seemed to flow quickly and the sun was shining until about an hour before the race, when rain and lightning started.

Bathrooms had arrows directing patrons which way to enter or exit, and attendants lined the way holding signs urging them to “please wear your masks.”

Pickups truck with Confederate flags flying from the back tooled around Speedway Boulevard. Ed Sugg’s merchandise tent flew them prominently in a display alongside Trump for 2020 banners and an American flag.

“They’re doing very well,” said the Helena, Alabama resident, who has been selling an array of wares at NASCAR races for 21 years. “People are disappointed that NASCAR has taken that stance. It’s been around for as long as all of us have been. I don’t think anybody really connects it to any kind of racism or anything. It’s just a Southern thing. It’s transparent. It’s just a heritage thing.”

“This ain’t racing,” said Elam, a 50-year-old from Cottondale, Alabama. “This is nothing like it used to be. You used to come up here and have fun, go to all the souvenir trucks, everything.

“You’ve got two out front now. That’s all you’ve got and if you don’t like who’s in it, then you don’t get anything.”

Then again, it was to provide the key element for the fan of everything from dirt track to drag racing.

“Just anything with speed,” Elam said.