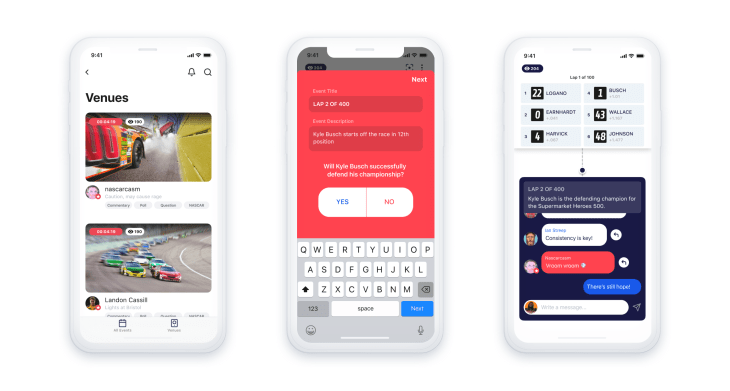 Facebook’s R&D group, NPE Team, is launching Venue, a new app for engaging fellow fans around live events. This is the third new app to launch this week from Facebook’s internal team focused on experimenting with new concepts in social networking. With Venue, the company aims to offer a digital companion for live events, starting with this Sunday’s NASCAR race.

The new app appears to be a challenge to Twitter, which today serves as the de facto “second screen” for commenting on live events and engaging with fellow fans. On Twitter, fans often use hashtags to add their commentary to live events that can range from TV show premieres to sports competitions to major political happenings, like live-streamed congressional hearings or the “State of the Union” presidential address, for example.

While there are some similarities with Twitter, Facebook’s Venue takes a different approach to the second screen.

Instead of having everyone viewing the event constantly chiming in with their own thoughts and reactions, the commentators for a given event hosted in Venue will only include well-known personalities — like journalists, current or former athletes or aspiring “fan-analysts.” The latter could include popular social media personalities, for example.

These commentators will provide their own takes on the event and pose interactive questions and polls for those watching. The event host may also open up short, constrained chats around specific moments during the event — but fan commentary isn’t the main focus of the app.

In addition, fans don’t stay glued to their phone during the entire event when using Venue. Instead, the app sends out a notification to users when there’s a new “moment” available in the app. These “moments” aren’t like Twitter’s summaries. They’re one of the short, digital opportunities where fans can participate.

“As NASCAR makes its return to action over the coming weeks, Venue will provide users with a unique and exciting way to connect with fellow race fans from around the globe – all from the safety and comfort of their own homes,” said Tim Clark, NASCAR SVP and chief digital officer, in a statement. “NASCAR was built on innovation, and we couldn’t be more excited to help a great partner like Facebook’s New Product Experimentation team innovate around new platforms,” he added.

Facebook believes the new app will give viewers the chance to better engage with live events and fellow fans.

That’s a bit of a stretch. Fans certainly engage with one another when chatting about live events on Twitter. And when Twitter streams the video from a live event — something Venue doesn’t do, by the way — Twitter will offer a dedicated space where users can easily see the tweets from fellow viewers. Other live video platforms, including Facebook’s own Facebook Live and Instagram Live, also include chat experiences, as do YouTube Live and Twitch.

The real difference between Venue and Twitter is that it shifts the balance of power. On Twitter, everyone’s comments are given equal footing. In Venue, it’s the expert hosts leading and curating the conversation.

That doesn’t mean there’s no chance for a conversation to go off the rails, however. To that end, Venue includes a reporting option for any content that goes against Facebook’s Community Standards. To report commentators’ or fans’ content, a user would need to long-press on the profile photo (which shows up next to any user’s comment). This triggers a pop-up that will ask the user to report the content.

Facebook hasn’t announced what future events Venue may host beyond NASCAR, but it sounds like it has plans to expand Venue further down the road, as it refers to NASCAR as its “first” sports partner.

The Venue app is live today on iOS and Android.