Why Small Online Business Get Hacked So Often 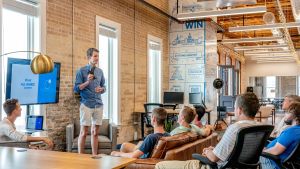 Small businesses in the United States get hacked far more often than the big ones do, but we only hear about the big security breaches because they affect millions of people at once, while 99% of the smaller hacks don’t. In what can be described as a spiraling effect, this in turn, is also a reason why small businesses are so vulnerable. Read on as we explain a few key points that should make all of these statements more relatable and credible.

Most small businesses believe in a false sense of security, which stems from two primary factors. The first of which is a lack of information on how serious an online threat can be to any small business, irrespective of its size.

A huge majority of cyberattacks are not reported by general media because the bigger channels do not consider such incidents to be newsworthy. Even the most dedicated cybercrime journals cannot possibly report all successful hacks, simply because most of them are not reported. Therefore, a large majority of small business owners remain underinformed and unaware of the threat and its potential repercussions.

Because there’s not enough news about small companies getting hacked, many SMEs feel that there is no reason to further invest more money in raising the standards of their cybersecurity. They remain under protected for the most part, not bothering to look for advanced IT solutions that can augment their safety, security, containment and fail-safe measures.

As it happens, some of the smallest businesses in the US do not even have any security measures in place at all! From the point of view of professional cybercriminal organizations, both the former and the latter are sitting ducks.

The solution to this problem is fairly easy and smaller companies do not need to bear the full cost of incorporating a new cybersecurity department of their own for that. They can find a more realistic and effective solution by outsourcing their cybersecurity needs to a company such as Capstone IT Services. Their comprehensive IT security solutions have kept multiple SMEs in West Palm Beach and Treasure Coast safe for years.

Finally, we have misbelief. Surveys have found that many owners of small businesses have a strong misbelief that they are far too small to be targeted by a hacker, or in other words, their assets and funds are not worth the effort for criminal organizations.

This is a misbelief or misconception that has massive repercussions. It is without a doubt, the primary reason why SMEs are hacked so often. As to why they are wrong, let’s highlight a few of the facts:

A large number of smaller ventures shut down early in their development because they go bankrupt soon after a devastating security breach. To have a strong cybersecurity system in place is not optional anymore, irrespective of the company’s size. In its absence, every SME is essentially a ticking timebomb.