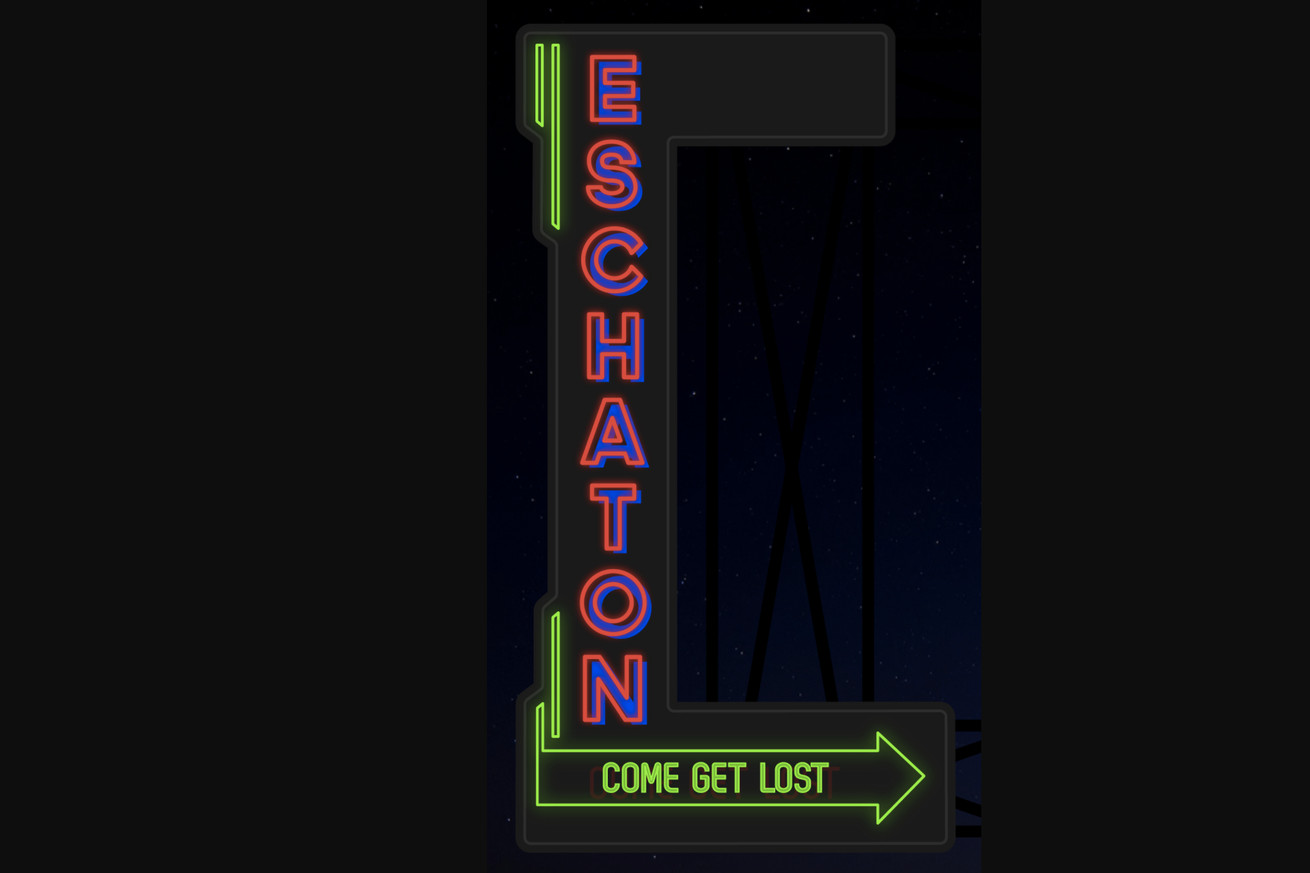 The hyperlink reaches my inbox a few minutes before 10PM on Saturday night. I click the link and enter a password. And at precisely 10PM, a video pops up on the page, welcoming me to Eschaton: part performance art, part nightclub, and all conducted over video chat.

During the next hour, I stumble across some dozen passphrases that allow me into Eschaton’s many rooms, each one launched as a Zoom meeting with a different host. There’s the room where a man in a rat costume reads quietly in a corner, stopping occasionally to stare at the audience. The one where a violinist alternates playing songs and delivering a wry standup routine. The one with a woman performing a Cabaret number in what looks like a cramped New York apartment.

The man in the rat costume sits quietly

Midway through, I stumble on a “locked” door that can only be opened by deciphering a puzzle, and I keep the violinist’s feed open while trying to figure it out. I fail — and Eschaton’s hostess shoos us all out at 11, offering a final, cryptic goodbye.

Eschaton is an online translation of the physical immersive theater genre popularized by projects like Sleep No More — a creative adaptation of Macbeth that takes place across several rooms of a large hotel where guests wander, observe, and occasionally participate. Two people who visit the same experience could end up seeing a wildly different show, and some fans return again and again looking for new details.

The COVID-19 pandemic has upended this kind of performance, and performers across the entire entertainment world are turning to virtual events. You can now hire a magician for a birthday party over Zoom. Companies have reworked escape room puzzles for players who can’t even escape their apartments. Video games like Fortnite and Minecraft are hosting big events like concerts and graduations. As interactive art site No Proscenium notes, Eschaton’s cast includes several veterans of Sleep No More and other prominent productions, trying their hand at a new kind of show. It’s currently in the preview phase, running every Saturday.

‘Eschaton’ plays on the strange intimacy of Zoom

The virtual nightclub in Eschaton follows a similar formula to its offline counterparts. Participants buy a ticket and wander between a series of dramatic vignettes, taking in fragments of a loose, nonlinear story. You’re encouraged to dress up for “a night on the town” and have a drink, either alone or with friends. While most of the performers ignore their voyeurs, there’s always a chance of one-on-one interaction and an expectation that you’ll get an experience not quitelike anybody else’s.

The experience also plays off the strange intimacy of group video chats. You can’t feel the body heat of another visitor, but you can see everyone else at the top of your Zoom screen, many with their full names on display and their cameras active, giving you a window into their homes. If you stumble onto a room with just a few people, abandoning it feels a little weird — leaving a performer to an empty live stream is somehow more awkward than an empty physical room.

Immersive theater has made the leap online before. Last year, Facebook-owned virtual reality company Oculus worked with studio Third Rail Projects to launch a surreal digital speakeasy called The Under Presents. It features live remote performances from actors in headsets, but it plays up the weird and expansive possibilities of a nonphysical space, hosting events like an absurdist game with constantly appearing and disappearing props. It also includes a single-player story mode that doesn’t involve live performers.

Eschaton, meanwhile, is more physically limited than a pre-pandemic theater production. Some “rooms” seem like polished studio spaces. Others look more like a corner of somebody’s basement or apartment. Nearly everyone — by necessity — performs alone. The show’s private interactions seem to bring performers into the real world, rather than drawing you into an otherworldly space. As I was drifting through rooms, I got a Zoom chat message with a phone number labeled “Girlfriend”; I called and got a private conversation involving a bubble bath and some poetry.

But the mysterious nightclub framing and hypertext elements make Eschatonmore than a string of live-streamed performances. Despite all the rooms and costumes being contemporary, they also give it an oddly retrofuturist vibe.

As in-person shows have moved to digital spaces, American public life has started to resemble the fever dream of a ‘90s digital media theorist — and Eschaton fits right in. We’ve seen talk shows hosted in Nintendo games and concerts held via third-person shooter. Eschaton adds a gloss of ‘90s cyberpunk movie, taking place in a new reality where a hazy video chat room nightclub really can replace its real-life counterpart… if only because the real thing no longer exists. Plenty of fellow club-goers didn’t take the informal dress code too seriously, but I could spot cocktail attire and a few carnival masks in the virtual crowd, adding to the sense of a collective surreality.

There’s no obvious narrative to Eschaton, but there is a sense of progression. Once you’ve spent a few minutes in a given space, you’ll get a chat message with a list of enigmatic room titles and one-word abbreviations: BOILER, ACID, SLICE. It’s a simple feature that evokes both the sense of finding a hidden door and sifting through some kind of dark web.

Like many relics of the pandemic, the future of Eschaton isn’t clear. It’s a fun experiment at a time when fun is difficult to find and I haven’t spent an evening outside my apartment in two months. But the experience is also radically more accessible than a lot of immersive theater — it’s not limited to the cities where these shows tend to concentrate, and at $10, it’s a fraction of what someone might spend for a real night on the town. If more people decide they can permanently live and work away from America’s biggest cities, it’s not unthinkable that their cultural products might also become a little more diffuse. For now, it offers something I’ve never quite seen before… and I’ll take any excuse to dress up.