To Restore Forests, First Start With a Seed

How did Rwanda manage to restore more than 800,000 hectares — almost half of its original pledge — in less than a decade? 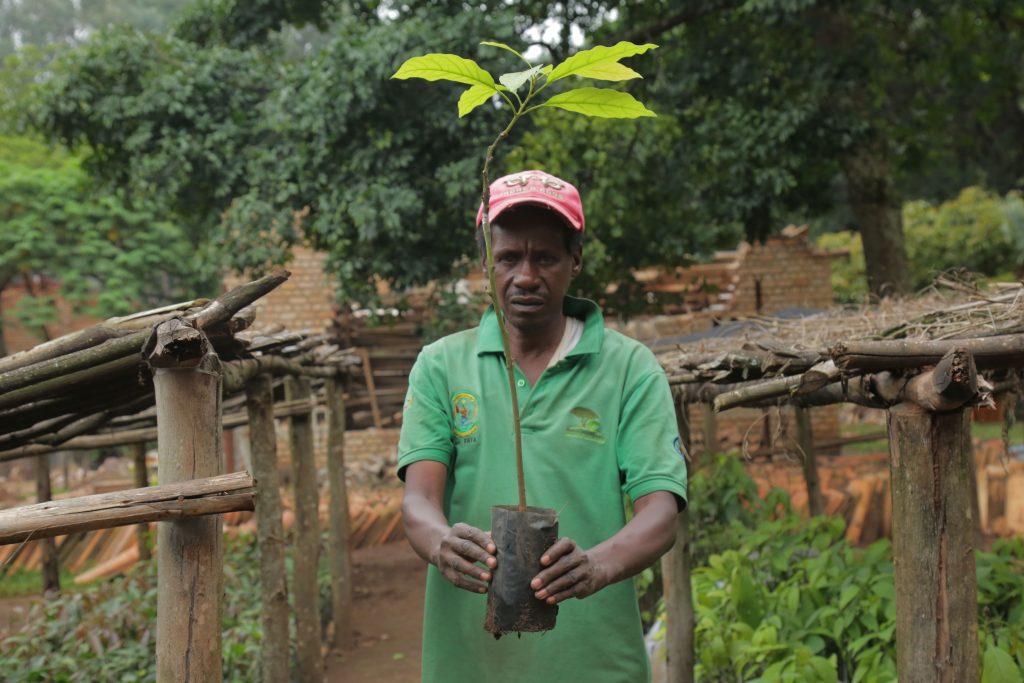 Emmanuel Nsabimana, a casual labourer at the National Tree Seed Centre, in Huye, in Rwanda’s Southern Province, has worked planting trees for over 40 years. He believes there has been considerable improvements in the seed quality from the centre since the International Union for Conservation of Nature (IUCN) became one of the contributors to its restoration. Credit: Emmanuel Hitimana/IPS

The densely populated and geographically small African nation had many limitations which could stand in the way of this as well as a commitment to achieving forest cover increase of up to 30 percent of total land area by 2030 as part of the Bonn Challenge.

Aside from limited land availability — Rwanda’s land area only encompasses 2.4 million hectares or 24,000 square kilometres — the country’s terrain did little to support the efforts. The country’s topography includes steep slopes, and it is the country with the highest mean soil erosion rate, according to the Food and Agriculture Organisation of the United Nations (FAO).

There were other factors too:

But by 2018, Rwanda, along with South Korea, Costa Rica, Pakistan and China, was considered one of the lead countries in the world with its successful restoration programme.

How did the country manage to restore more than 800,000 hectares — almost half of its original pledge — in less than a decade?

Part of the answer lies in the restructuring and strengthening of the country’s National Tree Seed Centre, located in Huye, in Rwanda’s Southern Province, some 133 kilometres from the country’s capital.

The centre is tasked with centralising the supply of tree seeds across the country, including establishing new seed sources, improving trees with growth deficiencies, and collecting and certifying seed.

Until 2014, the Rwanda Agriculture and Animal Resources Development Board (RAB) managed the centre. But farmers complained that they were unable to grow plants from almost 90 percent of the seeds from the centre.

Emmanuel Nsabimana, a casual labourer at the National Tree Seed Centre, has worked planting trees around Huye for over 40 years.

He remembers the attitude of local farmers and communities.

“Farmers were always bitter towards the centre because they thought that it was incapable of providing them with adequate seeds,” he recalls.

“Many would return the seeds.”

But in 2014 the centre shifted from RAB to become a unit of the Rwanda Forestry Agency. In 2016, the International Union for Conservation of Nature (IUCN) — one of the founders and Secretariat of the Bonn Challenge, along with the German Government — stepped in to become one of the most significant contributors to the restoration of Rwanda’s National Tree Seed Centre.

IUCN also partnered with the Rwandan Government, the Belgian Development Agency (ENABEL) and the University of Rwanda (UR) to strengthen the centre.

IUCN supported capacity building, including the training of staff, providing equipment to the centre, upgrading and developing infrastructure like greenhouses, maintenance of the seed stands where seeds are collected form, and rehabilitation of seed store where seeds are kept before they are distributed, Jean Pierre Maniriho, Forest Landscape Restoration Officer at IUCN, tells IPS.

“Before partners came in, many things were not going well. For example, we did not have a cold room, which was bad for seeds. We were only two staff, and the stock was also old. But we have steadily improved until now,” Floribert Manayabagabo, the production officer at the National Tree Seed Centre, says. His job is to make sure the seeds harvested at the centre are ready for market.

Manayabagabo thinks that the centre’s success story is thanks to a combination of great partnerships that ensured the centre now has good infrastructure that includes nurseries, a laboratory, a modern cold room and five full-time staff.

Maniriho says seed quality and quantity are essential to ensure sustainability and to meet demand.

Currently, 30 percent of the seeds come from the nearby 90-year-old, 200-hectare Arboretum of Ruhande, which surrounds the University of Rwanda.

The seeds from the arboretum include 207 exotic and indigenous species, explains Emmanuel Niyigena, a field officer at the centre.

The remaining 70 percent come from the outside of the centre, with a significant amount of seeds sourced from nine agro forestry-related cooperatives within Rwanda, and the remaining seed being imported from Kenya.

One of many nurseries at Rwanda’s National Tree Seed Centre. The centre is tasked with centralising the supply of tree seeds across the country, including establishing new seed sources, improving trees with growth deficiencies, and collecting and certifying seed. Credit: Emmanuel Hitimana/IPS

It’s Eric Kazubwenge’s job to make sure that the seeds from the centre never disappoint. He is in charge of seed inspection and regulation at the centre.

“We normally do a physical inspection to make sure that they are not damaged. Then we proceed with laboratory testing before we conduct other testing in the nursery where seeds are conserved to make sure they will not resist soil plantation.”

He adds that multiple tests are continually carried out to ascertain how long a seed can grow in a nursery or how much moisture they need to survive.

Kazubwenge learnt many of these skills in Kenya, where he was trained through an IUCN partnership.

Kazubwenge tells IPS that previously it was very difficult for the cooperatives to supply to the centre the good seeds as they couldn’t distinguish good from bad quality seeds. The Tree Seed Centre was also unable to test and prove the quality of seeds due to lack of equipment (seed laboratory was not well equipped). This combination of limitations meant only a handful of seeds provided to the forest growers before 2014 had been fruitful.

“Our stock is (now) full of good seeds in terms of quality and quantity, thanks to cooperatives that were trained in seed collection and selection through IUCN partnership,” Janviere Muhayimana, who is in charge of the seed stock, tells IPS.

The centre also ensures farmers and the community are given the necessary information about the planting of the improved seeds.

Nsabimana concurs: “There are no more complaints (from farmers) as the seeds respond well to the soil.”

The researchers are optimistic about the future.

Kazubwenge’s vision for the centre’s future involves advanced technologies that will allow him to “carry out genetic assessment and analysis because it gives us deep knowledge about the compatibility of seeds according to their origins”.

Maniriho sees Rwanda on a good path to become a regional seed hub.

“Deforestation is a global challenge. What we have in Rwanda is what exactly is happening in Burundi or Malawi. We are importing seeds from Kenya today, but tomorrow others may be importing from us. We can make those connections that can encourage and strengthen the reciprocal partnership in seed supply and keep us from sending money overseas to only import seeds that we are sometimes capable of producing.”

Rwanda’s successful steps towards meeting its reforestation pledge proves a powerful example of how nature conservation can support livelihoods ahead of the IUCN World Conservation Congress, which will be held in France in January 2021. Held every four years, the Congress is a meeting of conservation experts and custodians, government and business representatives, indigenous peoples, scientists, as well as other professional stakeholders, who have an interest in nature and the sustainable and just use of natural resources. One of the major issues addressed will be the managing of landscapes for nature and people.

** Writing with Nalisha Adams in Bonn.