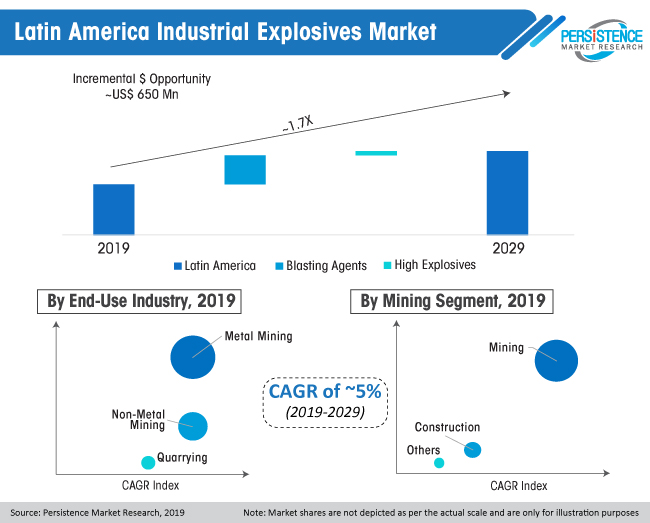 Latin America industrial explosives market is estimated to reach US$ 852.9 Mn by 2016 end, driven by increasing mining activities in developing economies of Latin America, rise in mineral extraction activities, and increase in the use of explosives for construction purposes.

According to a new market report published by Persistence Market Research titled, “Latin America Market Study on Industrial Explosives: Metal Mining Sector to be the Largest Consumer during the Forecast Period 2016 – 2022”, the Latin America industrial explosives market is estimated to be valued at US$ 1,319.7 Mn by 2022.

By end use, mining segment is expected to expand at a higher than average CAGR as compared to other end-use segments such as construction and others, both in terms of value and volume. The increase in GDP output is one of the major factors driving the market. The industrial explosives market in Brazil, with the exponential increase in GDP, is expected to witness high revenue growth during the forecast period. Meanwhile, the market in developed economies is expected to decline in the near future due to lower GDP growth, thereby implying lower consumption compared to other economies.