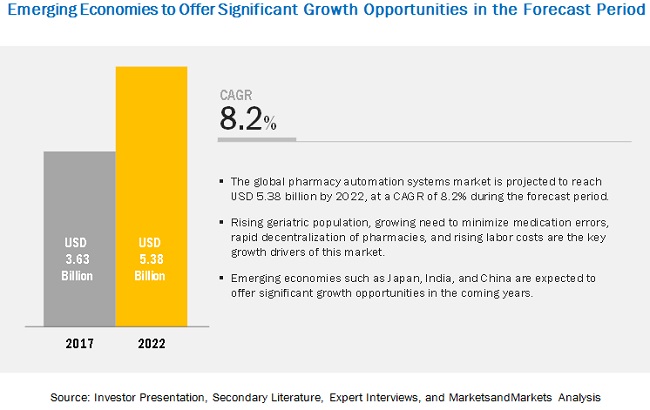 How much is the Pharmacy Automation Systems Market worth?

MarketsandMarkets forecasts the pharmacy automation market is estimated to grow from USD 3.63 billion in 2017 to USD 5.38 Billion by 2022, at a Compound Annual Growth Rate (CAGR) of 8.2% during the forecast period. Automated systems are considered to be one of the most efficient solutions to minimize these errors. In the past, the successful implementation of automated dispensing cabinets (ADCs) and automated dispensing machines (ADMs) in hospitals has led to a significant reduction in the number of dispensing and medication errors in hospitals.

By product, the automated medication dispensing systems segment accounted for the largest share of the pharmacy automation market

By end user, the retail pharmacies segment to record the highest CAGR during the forecast period

Which are the key players in the Pharmacy Automation Systems Market and how intense is the competition?

Becton, Dickinson and Company’s leading position in the pharmacy automation market is mainly attributed to its broad product portfolio with major focus on pharmacy automation. The company continuously focuses on R&D and has invested around 7% of its revenue in R&D activities. The company also focuses on the inorganic growth strategy of acquisitions to strengthen its product portfolio as well as its market position.

North America to account for the largest market size during the forecast period :

North America is expected to hold the largest market size in the pharmacy automation market during the forecast period, followed by the European region. The large share of the North American pharmacy automation market can largely be attributed to the increasing number of drug prescriptions at pharmacies resulting from growth in the aging population.