What we thought was a planet appears to be gradually fading from view. 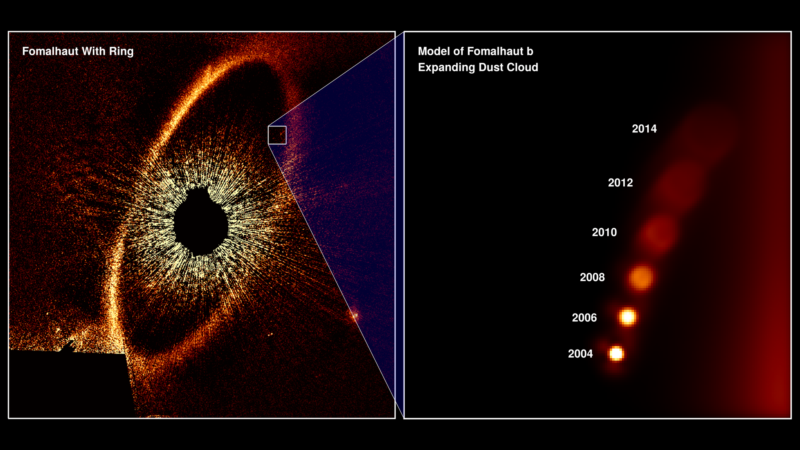 Enlarge / The incredible vanishing exoplanet—what models suggest we’d see as the debris of a collision diffuses away.

We’ve not actually “seen” the vast majority of exoplanets we’ve found orbiting distant stars. Instead, their existence has been inferred based on changes in the light of the stars that they orbit. That makes the 20 or so we have imaged directly exceptional. Direct imaging typically requires a very large planet, which means this sample isn’t entirely representative, but these planets do provide a unique opportunity for us to observe how bodies interact with each other and their environments in exosolar systems.

But, if two researchers at the University of Arizona are right, we can scratch one of these examples off the list. They say that the supposed planet has vanished in more recent images, which indicates it was never actually there in the first place. Instead, they argue that we’ve been observing the debris of a smash-up between two very large asteroids

How could astronomers have identified a planet that didn’t exist? Well, it really looked like it did. Back in 2008, when scientists first announced its discovery, the planet Fomalhaut b seemed to be very much there. Consecutive images taken a couple of years apart appeared to show it orbiting, and its orbit took it through a disk of dust and frozen material that is exactly where we’d expect planet formation to take place. So, at first glance, everything looks good.

But problems became apparent pretty quickly. For one, planets have sufficient gravity to create gaps in any disks of material that they orbit within. But the disk at Fomalhaut b appears to be remarkably unperturbed by what seems to be a giant planet within it.

More problems came when scientists tried to image it in the infrared. Fomalhaut is a young system, meaning any planets there have formed relatively recently. And, based on the amount of visible light reflected by the apparent planet, it was a large gas giant, potentially far larger than Jupiter. That means the planet hasn’t had much time to release the heat generated as material streamed in to form it—and with a planet this size, there should be plenty of heat. Yet Fomalhaut b was invisible in the infrared when scientists looked for it.

Combined, these facts limit the possible size of the planet to smaller than Jupiter. Further observations took the limit down to near Earth-sized, which is basically incompatible with the amount of light we see from it. So, people started considering alternative ideas about what Fomalhaut b might be, including a smaller planet with large rings or even simply a large cloud of dust generated by local events in the ring.

The researchers behind the new work, András Gáspár and George Rieke, found a few additional images of Fomalhaut in the Hubble archive. And, in these more recent images, some strange things seem to be happening.

The first issue was with the orbital solutions. Based on Fomalhaut b’s position in the earliest few images, researchers were able to calculate its orbit and predict where it should be in future images. And, in later images, it was close to where it was predicted to be. But differences existed and got larger over time. By the last image they had where Fomalhaut b was visible, it had deviated significantly from its predicted orbit. When the researchers tried to figure out its actual orbit, they discovered it was unstable—Fomalhaut b was apparently leaving the system.

The second was with the apparent planet itself. While it’s difficult to resolve much in the way of details at this distance, Fomalhaut b appeared to be growing increasingly diffuse over time.

The final issue was a relatively simple one: in the most recent image, the planet was gone entirely. That doesn’t mean there’s nothing there—it just means that whatever might be there has dropped below Hubble’s ability to detect it.

Assuming this data is all accurate, it’s easy to accept Gáspár and Rieke’s contention that none of this is consistent with Fomalhaut b being a planet. So what is it? Their favored explanation is a collision between two asteroids that are roughly 100km across. If the collision was energetic enough to obliterate the asteroids, it would produce a steadily expanding cloud of debris that could reflect enough sunlight to be visible to Hubble.

Since the fragments would be small, they’d quickly lose the heat of the collision to space, explaining the lack of infrared. And their gradual dispersal would explain the expansion and eventual disappearance of Fomalhaut b. Finally, because the collision would alter the orbital trajectories of the ensuing fragments, this would explain why they were seemingly on a path to exit the exosolar system entirely.

When did that happen?

To find out whether this idea is consistent with the data we have, the researchers got hold of a software package that could model an expanding sphere of reflective particles, and they used it to produce estimates of what Hubble might observe over time. This produced images that were reasonably consistent with the actual images obtained by Hubble. Given the agreement, the researchers were able to use the model to trace things back to when the actual collision must have taken place. That indicated it had occurred shortly before the first Hubble image that indicated the planet was there.

That, of course, would suggest we’ve been extremely lucky to have imaged the collision at all. How lucky? To find out, the researchers estimated the amount of material in Fomalhaut’s disk and how many sufficiently large asteroids would be formed. From there, they calculated how often collisions might take place. While there was a pretty large range that depended on the assumptions used, it placed the frequency of sufficiently large collisions somewhere between 150,000 and half a billion years. So, if Gáspár and Rieke are right, we have indeed been very lucky.

Obviously, there are lots of strange things going on in the Universe that we can’t entirely explain, so there’s a chance that an explanation that seems to make sense will turn out to be wrong. The key test will be to have Hubble or its successor make regular diversions to the Fomalhaut system to make sure that the seemingly missing planet doesn’t reappear in the future.