Last week almost 400 Rohingyas were rescued off the coast of Bangladesh after being at sea for two months after their boat failed to reach Malaysia. But the case is not a new one as each month thousands board boats from refugee camps in Bangladesh in an attempt to irregularly migrate to Malaysia. 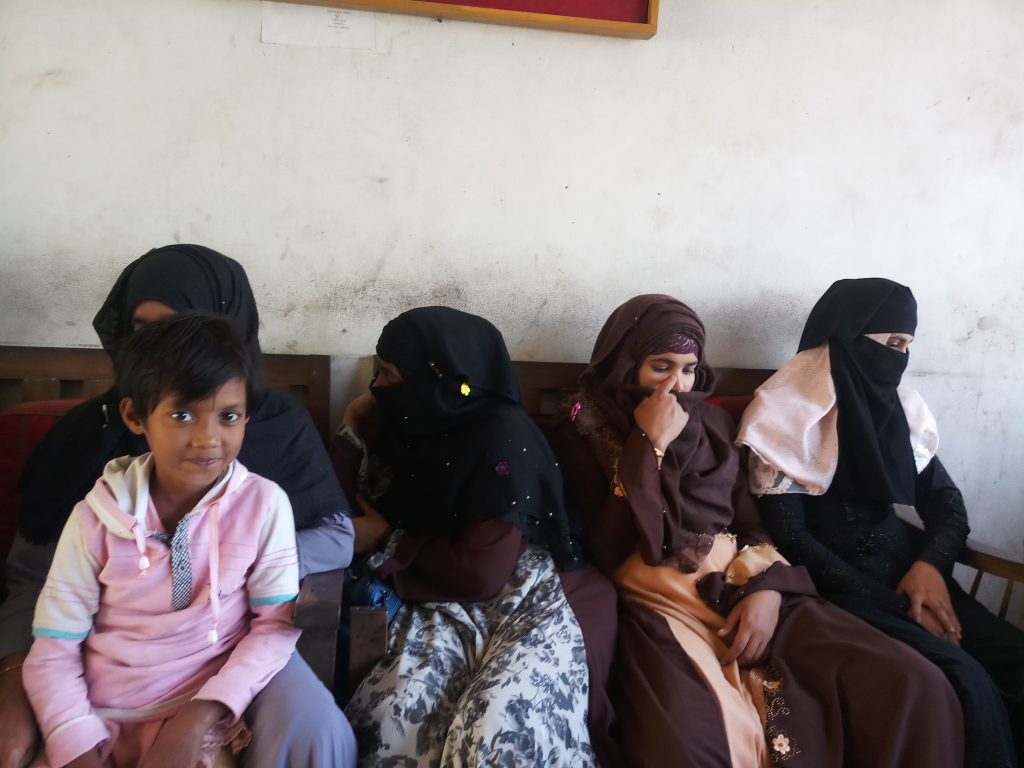 Four women and a young child were detained at Ukiya Police Station in Cox’s Bazar after police rescued them from being trafficking to Malaysia. Credit: Rafiqul Islam/IPS

COX’S BAZAR , Apr 21 2020 (IPS) – Last week more than 396 starving Rohingyas were rescued off the coast of Bangladesh after being at sea for two months. At least 32 had died on the boat after it failed to reached Malaysia. While it was unclear at the time of the breaking news whether the refugees were from Myanmar, where they are originally from, or Bangladesh — where more than a million Rohingya Muslims live as refugees after fleeing violence in Myanmar in 2017 — the attempt to reach Malaysia is not a new one.

For years, Rohingya refugees have boarded boats, organised by traffickers, in the hope of finding refuge in Southeast Asia. Usually they make the 2,500 km sea voyage during the dry season from November to March while the waters are calm.

While there are no official figures from local police about the number of trafficking victims, a local crime reporter who asked not to be named told IPS that the numbers rank in the thousands.

“Around 350 people are trafficked from Cox’s Bazar in every trip. And there are six to seven such trips per month. About 1,500 to 2,000 people, on average, are being trafficked to Malaysia every month,” he told IPS.

The Rohingya are one of the most persecuted minorities in the world, they are denied citizenship in Myanmar and also restricted from freedom of movement, state education and civil service jobs.

Some of those living in the Cox Bazar camps have attempted the irregular migration journey to Malaysia in the hope of earning an income and having a better life. But many of the so-called “work opportunities” they have been offered have proven to be trafficking scams.

A gang of human traffickers based in Malaysia have reportedly been luring Rohingya youth and young girls to the South Asian nation, working with local traffickers who visit Rohingya camps and identify possible targets.

“There is a section of people in Rohingya camps and they find the Rohingya girls, who look pretty, and those who could be trafficked,” Nurul Islam Majumder, a police inspector at Ukhiya Police Station in Cox’s Bazar, told IPS.

The Malaysian-based traffickers then call their targets and lure them into making the crossing to Malaysia by promising jobs or marriage.

“And then they bring the victims to seashore though a specific route and they are trafficked to Malaysia by boats,” Majumder said.

Mukarrama was taken to Ukiya Police Station in Cox’s Bazar after police saved her with others who were attempting to travel irregularly to Malaysia. What they didn’t know was that they had been potentially caught in a human trafficking syndicate. Credit: Rafiqul Islam/IPS

16-year-old Mukarrama, how lived with her family in Bangladesh in the Kutopalong camp in Cox’s Bazar, was one of the young women who had been lured to Malaysia by the promise of marriage. But before she could leave the shores of Bangladesh she, and others with her, were discovered by authorities and returned to the camp.

Her journey first started in 2019, when a man called her mobile and introduced himself as a Rohingya named Jubair. He was living in Malaysia, he told the young girl, and wanted to marry her.

What Mukarrama and her family did not know then was that he was part of a human trafficking syndicate. Jubair may not have been his real name.

Since her family’s escape from Myanmar, the family of five had been living in a single-roomed makeshift house without basic amenities. Built on a hill slope, the home is in a precarious position and vulnerable to destruction during the landslides that inevitably occur during the monsoons here.

Mukarrama and her family wanted a better life. So when Mukarrama told her parents about the call with Jubair, they agreed to the “proposal”.

“With permission of my family, I got married with my husband over the phone one year ago,” Mukarrama told IPS while she was at a one-stop policing centre in Cox’s Bazar. She needed the legal services of the centre to re-enter the camp.

Since her “marriage”, Mukarrama was desperate to go Malaysia to join her husband. On Mar. 9, Jubair phoned her and said a local man would call her over the phone and ask her to follow him as he would help her travel to Malaysia.

“A person phoned me the next day morning and asked me to come to the gate of the Rohingya camp immediately. And when I came to the camp’s gate, he took me inside an auto-rickshaw…there were also two Rohingya girls and two youths in the rickshaw.

“We were taken into a jungle along the coastline in Cox’s Bazar to send us to Malaysia by a wooden boat on the rough sea route,” Mukarrama remembered.

“A group of brokers gathered us in a jungle and just before [we boarded] a boat for sending us to Malaysia, we were rescued by police.”

Local brokers often gather the persons to be trafficked, particularly adolescent girls and boys, at isolated places along shores.

Mukarrama had been fortunate. As there have been reports of extortion and physical assault of the victims before they board the boats.

“Before putting us on a boat in a night, they (local brokers) had tried to rape us in an isolated place. And that’s why we started screaming. Hearing our crying, local people recovered us and handed over to police,” a trafficking survivor who did not wish to be named told IPS.

Local crime reporter Mahmudul Haque Babul told IPS that once in Malaysia the abuse continues: “Once Rohingyas reach Malaysia, traffickers demand a big amount of ransom from the family members of victims. If the families of women victims fail to give the ransom, the women are sold for prostitution abroad.”

According to the Global Sustainability Network (GSN), trafficking remains an issue globally as “there are many incentives for people to exploit others for financial gain and as a result many people profit. It’s therefore a thriving business with a strong hold in countless sectors and at multiple levels. It will be defended with vigour”.

Rasheda Begum (19), another trafficking survivor, told IPS that she had married fellow refugee Mohammd Ilias when she was only 15. He left for Malaysia shortly after via the irregular sea route.

“Since then, we have not united and that’s why I wanted to join my husband any way,” she said, revealing that her long-cherished wish was to join her husband in Malaysia.

Recalling the dark days when the Myanmar military burnt their houses and killed Rohingyas in Rakhine State, Begum said: “Nothing remains in my life. Brokers lured me to help go Malaysia and meet my husband.”

But fortunately she and the others being trafficked with her were discovered by authorities and returned to Cox’s Bazar.

Citing official statistics, Majumder said that so far in 2020 five cases linked to human trafficking were recorded with the Ukhiya Police Station, adding that law enforcement agencies were doing their best to combat the crime.

In a recent statement, the U.N. Refugee Agency said they, along with the Bangladesh government, had been working to raise awareness among the refugees and local people on the issues of trafficking and risks they face. The U.N. is also supporting the strengthening of law enforcement capacities to address smuggling and trafficking, while support is also available to trafficking survivors, the statement read.