A new study by the company, titled ‘Medical Foods Market: Global Industry Analysis 2013-2017 and Forecast 2018-2026’, has listed out the key points being considered by companies and governing bodies involved in the medical foods market to stay sustainably profitable in the long run. 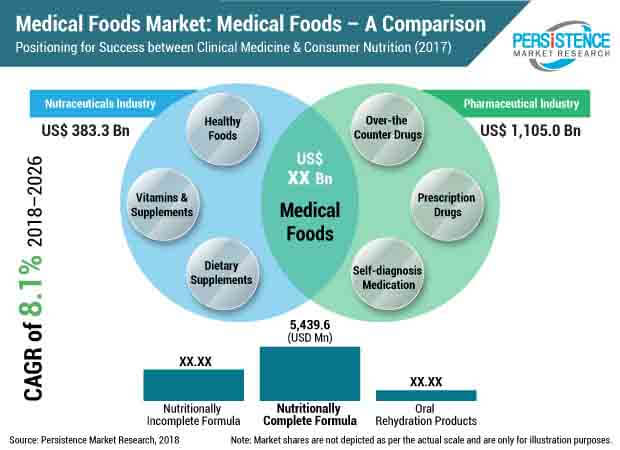 The North America medical foods market is a prominent market on a global level, with the adoption of medical foods comparatively high in the. Health practitioners present here prescribe medical foods over other routine foods to overcome diseases at a much faster pace.

The market in Asia Pacific, which includes China, is expected to grow over the forecast period for medical foods, as most of the suited healthcare facilities for medical foods are operating in this region by setting up manufacturing units.

This step provides quality products with affordable working labor that cuts operating expenses. With a rise in the population in Asia Pacific, it becomes a sure-shot opportunity space. However, increasing price and other therapeutic alternatives present in such developing regions are countering the growth of the medical foods market in this region.

For example – ORS is available in most parts of the world with provided schemes from world health bodies such as WHO. But this is not the case with other medical food categories due to many reasons that are better classified by manufacturers and government officials.

The medical foods industry comprises de?ned food products that are manufactured to act for a particular disease indication. They meet the nutritional de?ciencies observed after a speci?c disease. This report helps in studying the market requirements designed for medical foods, and other dynamics going forward in the industry.

For medical foods, nutritionally complete products are stated as complete formulation products, which consist of sufficient amounts of protein, fat, carbohydrates, vitamins, and minerals in their composition with suitable pharmaceutical compounds.

Metabolic disorder was the prime application of medical foods, which has changed over a period, with recent products also suitable for different health indications such as cancer, depression, and Alzheimer’s disease. Though the number of medical foods available for metabolic disorder is still high in number. This is more because patients with such disorders only depend on medical foods for complete nutritional benefits.