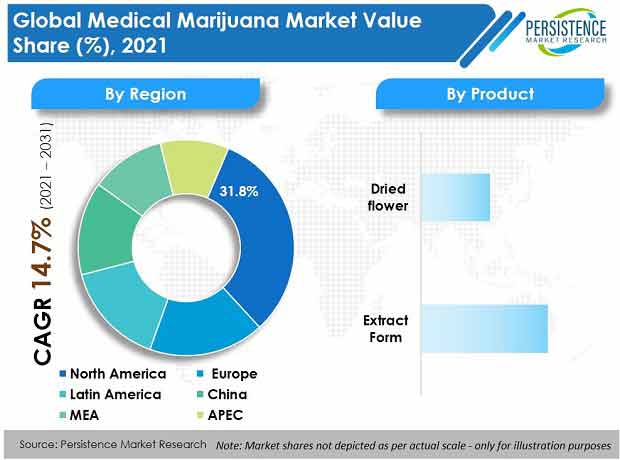 The extract form is the dominant segment in the market for medical marijuana as maximum number of products are made out of extract form and they are conveniently used by majority of the population.

The product listed include oil concentration, tinctures, sprays, edibles, tablets, and capsules based on prescription. In contrast, the companies conduct research activities to introduce novel products in the market. In terms of revenue, the extract segment is expected to account for large revenue share of 63.9% in 2018, is expected to witness significant growth during the forecast period.

The growth in the dried flower segment is expected to be primarily driven by traditional use and purpose of usage with options available to consume dry form medical marijuana without any interventions.

Others segment has a range of indications in which medical marijuana is used such as PTSD, anxiety, mental health conditions, and many more. However, the seizures segment which involves cases of multiple sclerosis, Parkinson’s disease, and convulsions is expected to witness high CAGR of 16.1% during the forecast period.

The retail pharmacy distribution segment is expected to hold maximum share in the overall medical marijuana market due to the large number of companies forming dispensaries of their own to sell the products on a major scale.

Retail pharmacy is the first choice of distribution among manufacturers and consumers. Retail pharmacy distribution segment is estimated to have a market share of 77.9% in 2018 and a steady growth the E-commerce is also expected in the medical marijuana market due to change in operational functions that offer a high growth rate during the forecast period.

Medical marijuana is well known for its notorious qualities that are being projected in different communities around the world. It is not in use by majority of the global population for medical cases. In the U.S., marijuana is classified as a schedule 1 controlled substance, which makes it illegal to consume or possess.

Limited use of medical marijuana has latched on to claims that it is useful to treat various ailments such as Crohn’s disease, multiple sclerosis results into muscle spasm, epilepsy, glaucoma, and nausea, among others.

But with developments for medical marijuana usage for medical purpose are on a rise in both developing and developed countries, progress with medical marijuana consumption in severe health issues often makes it a noticeable choice for physicians to prescribe it to treat diseases. Besides, there must be solid evidence to make it rather official to be in use.

Get Full Copy of This Report @ https://www.persistencemarketresearch.com/checkout/13897

Conventional medicines are becoming expensive with time, whereas the adult population is increasing, which fails to adapt to this dynamic shift.