In 1991, the share of seats held by women in the Ethiopian parliament was under 3 percent. Today it stands at 38 percent, almost twice the ratio of women in the United States Congress. Experts say when women are better represented in government office, the gains are likely to spill down and improve the lives of all women. 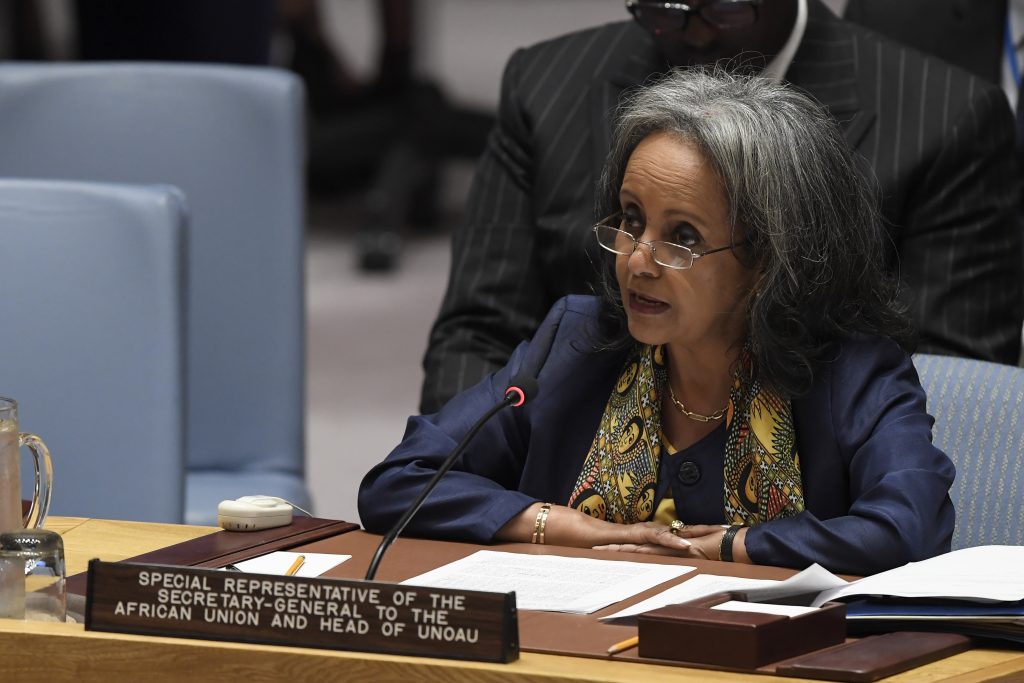 Sahle-Work Zewde is Ethiopia’s first female president. Since coming to power in 2018, Prime Minister Abiy Ahmed has reorganised the cabinet to ensure that 50 percent of the government’s top ministerial positions have been given to women. Never before in Ethiopia have so many high-ranking government positions been held by women. Courtesy: UN Photo/Evan Schneider

YORK, United Kingdom, Apr 10 2020 (IPS) – Recent gains by women in the Ethiopian political landscape offer a chance to improve gender equality around the country and put an end to long-standing societal iniquities.

Since coming to power in 2018, Prime Minister Abiy Ahmed has reorganised the cabinet to ensure that 50 percent of the government’s top ministerial positions have been given to women.

In 1991, the share of seats held by women in the Ethiopian parliament was under 3 percent. Today it stands at 38 percent, almost twice the ratio of women in the United States Congress.

But, at the same time, stark gender disparities persist all around the country. The hope is that improved representation in the federal government will tangibly affect and improve the status of Ethiopia’s more than 50 million women and girls.

“There is strong evidence that as more women are elected to office, there are more policies enacted that emphasise quality of life and reflect the priorities of families, women and minorities,” Katja Iversen, president of Women Deliver, an international organisation advocating around the world for gender equality and the health and rights of girls and women, tells IPS.

“Studies also show that women are more likely than men to work across party lines, help secure lasting peace, and prioritise health, education and other societal priorities key to the wellbeing and prosperity of both constituents and societies at large.”

At the same time, there are concerns that Ethiopia’s most recent female politicians are not in elected positions rather are making up a quota.

“The women who are in power are more loyal to the prime minister than the public that is why they find it difficult to act—for fear of disappointing the person who put them there,” Hadra Ahmed, a freelance Ethiopian journalist, tells IPS.

“We can only say women are in politics when they are represented as candidates and as decision makers,” she adds.

Women in Ethiopia have long faced systemic inequities. The discrepancies begin early and often persist throughout Ethiopian women’s lives. Nearly twice as many men than women over age 25 have some secondary education. Women often face more economic constraints than men, including less access to credit and limited market access.

“Ethiopians strongly believe that women can never be as good as men and this is specially heart breaking when it comes from your mother [or] a well-educated person that you probably look up to [such as] your teacher,” Ahmed says.

“And the whole system tells you that you are not as capable through different policies like affirmative actions that lower the passing grade rather than helping girls to study and making sure they make it to school in time.”

Female genital mutilation rates remain high, with 74 percent of girls and women aged 15 to 49 years of age experiencing FGM, according to UNICEF. Child marriage still occurs, with about 58 percent of Ethiopian females marrying before they turn 18.

Eighty percent of Ethiopia’s population resides in rural areas and women provide much of the agricultural labour in these communities, while shouldering the majority of child-rearing duties.

But the contributions of women can go largely unrecognized. Fathers or husbands often restrict access to resources and community participation. One in three women experience physical, emotional or sexual violence, according to USAID.

“The perceptions and attitudes that women should belong to the kitchen and men in the board room are widely spread across the world. Although we have seen changes and progress towards women participating in public sphere including in political leadership, we are seeing less progress of men entering the kitchen and taking leadership in care work. Globally, women still perform majority of unpaid and domestic work.”

Ethiopia is no exception, Musindarwezo says, illustrated by the widespread expectation that women should not only be the primary childcare providers but they should also perform the majority of unpaid and domestic work.

In Ethiopia’s northern Tigray region, life for the majority of women follows a traditional course, centred on family and agriculture. Credit: James Jeffrey/IPS

In 2017, Ethiopia ranked 121 out of 160 countries on a Untied Nations gender equality index based on various social, health and political factors.

“If you look at the experience of other countries like India, the media representation of strong women is what helped women become stronger in the society,” Ahmed says. “Seeing a stronger version of us somewhere pushes us to be better. Assigning to women a quota in government positions and exploiting them in these positions will not solve anything.”

Iverson says that in order to make sure women’s political participation is not only symbolic, governments must also fully commit to gender equality through equal pay, affordable childcare, gender sensitive budgeting and auditing, and paid parental leave.

Parental leave—including paternity leave—has proven a significant “norm changer” in improving women’s participation in the workforce, Iverson says. When men take paternity leave, she explains, it both affirms that caregiving is everyone’s responsibility, helps improve pay equity, and makes it easier for more women to be successful and climb the career ladder.

Despite the Ethiopian government’s bold moves to empower female politicians, the country’s fraught political realm—which can be dangerous for anyone, regardless of sex—still poses many hurdles for women to overcome, especially given the pernicious influence of social media.

“Women politicians face unique forms of online and offline attacks and deliberate actions to discourage their participation in politics,” Daniel Bekele, commissioner of the Ethiopia Human Rights Commission, said during the keynote speech at the “Women’s Political Participation and Election in Ethiopia: Envisioning 2020 and Beyond for Generation Equality” national conference at the end of 2019.

“This reflects how patriarchal [our] society is in its functions.”

Musindarwezo notes that in addition to having women in political leadership, it’s just as important to create an environment that is conducive for women to be effective leaders.

“Often times we expect women to magically address all the issues especially gender issues without removing structural barriers they face,” Musindarwezo says. “Women political leaders face barriers such as their voices being overshadowed by political parties’ voices, limited access to adequate resources they need to make a difference and being held to different standards to those of men. Women leaders often face biased public criticism, harassment and intimidations just because they are women.”

Bekele says that Ethiopian women face particular challenges in times of elections that seriously impact and discourage their participation. Ethiopia is due to hold an all-important national election this year, but currently it has been delayed due to the COVID-19 coronavirus outbreak.

“There must also be implemented legal protections for women including laws against gender-based violence, policies regarding sexual harassment, and accessible justice systems for accountability,” Iverson says. “Countries must ditch discriminatory laws that are holding women back and enact legal frameworks that advance gender equality at work, in society and at home.”

Those at Women Deliver note how, to Ethiopia’s credit, it has brought in a new law that annulled previous legal provisions that gave authority to a husband over a couple’s assets and whether his wife could work outside of the home.

As a result of the legal change, spouses are now equal with regard to the administration of assets, and a husband cannot unilaterally prevent his wife from working. The World Bank estimates that this law has enabled an increase in the participation rate of women in productive sectors.

Despite continuing challenges for Ethiopian women, change is afoot beyond the political level. In the Ethiopian capital, Addis Ababa, Setaweet is the country’s first feminist research and training company, which offers tailor-made gender equality services for schools, agencies and corporate companies. Its flagship project is a feminist curriculum for secondary school students dealing with femininity and masculinity, healthy relationships and positive self-images.

“Women are powerful agents of change, and their participation at all decision-making levels is a prerequisite for politics and programs that reflects societies and are effective, sustainable and inclusive,” Iversen says.