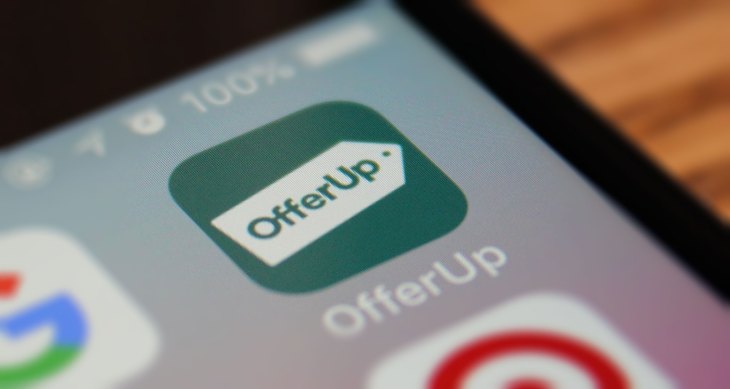 OfferUp, a top online and mobile marketplace app, announced this morning it’s raising $120 million in a new round of funding led by competing marketplace letgo’s majority investor, OLX Group, and others. As a part of the deal, OfferUp will also be acquiring letgo’s classified business, with OLX Group  gaining a 40% stake in the newly combined entity.

Other investors in the new round include existing OfferUp  backers Andreessen Horowitz and Warburg Pincus. The funds will be put toward continued growth, product innovation and monetization efforts, OfferUp says.

The round will close with the closing of the acquisition, which is expected to take place sometime in May. To date, OfferUp has raised $380 million.

The acquisition will see two of the largest third-party buying and selling marketplaces — outside of Craigslist, eBay and Facebook Marketplace, of course — become a more significant threat to the incumbents. Together, the new entity will have more than 20 million monthly active users across the U.S. For consumers, the deal means they’ll no longer have to list in as many apps when looking to unload some household items, electronics, furniture or whatever else they want to sell.

“My vision for OfferUp has always been to build a company that helps people connect and prosper,” said Nick Huzar, OfferUp CEO, in a statement about the acquisition. “We’re combining the complementary strengths of OfferUp and letgo in order to deliver an even better buying and selling experience for our communities. OLX Group has unparalleled expertise and clear success with growing online marketplace businesses, so they’ll be a great partner as we continue to build the widest, simplest, and most trustworthy experience for our customers.”

OfferUp also acknowledged that mid-pandemic is an odd time to announce such a deal — especially at a time when the COVID-19 outbreak is affecting its own employees, its partners, and the buying and selling community itself. And this will continue for some time.

However, Huzar positions the deal as one that will allow the business to grow, despite the current state of affairs.

“This news helps us to continue to innovate and grow, in spite of these challenging times, and continue to deliver on that promise,” Huzar noted, in a company blog post.

For now, the OfferUp and letgo apps will remain separate experiences and no disruptions to any sales will be made. Consumers will also be able to download both apps to iOS and Android devices for the time being, too.

But soon, both sets of users will gain access to a larger network of buyers and sellers, along with nationwide shipping options, and trust and safety problems. We understand this will involve allowing users of both sets of apps to see more posts and interact with more buyers and sellers — so some sort of merging of the two networks is at play here. There will be additional changes to improve the user experience for all users in the future, as well, but the company isn’t sharing details on that today.

Letgo  is bringing to the table an app with more than 100 million worldwide downloads, so there is a potential to reactivate some of the lapsed users who aren’t currently shopping or selling on its marketplace today. The two apps were often neck-and-neck in terms of their app store category rankings, though on iPhone OfferUp has maintained a slight lead. (See App Store and Google Play charts below.)

However, letgo’s business outside of North America will be separately owned and operated as part of the OLX Group, the companies said.

“Letgo and OfferUp have always shared the same core vision for how large America’s secondhand economy can become — harnessing tech innovation to bring about an extraordinarily positive impact on consumers’ wallets and also on the environment,” said letgo co-founder Alec Oxenford. “Bringing our apps together moves us much closer to that vision,” he added.

Prior to this deal, OfferUp had seen a number of executive departures, including the exit of Engineering lead and VP Peter Wilson in 2017, VP of Product Chloe Harford in 2018, VP of Employee Experience Deb Nielsen in 2018, subsequent VP of Employee Experience Sarah Bilton in 2019, and Chief Experience Officer Jerry Howe in January 2020. CFO Rodrigo Brumana has also left, which was previously unreported. The company’s interim CFO is Chief Growth Officer Ian Fliflet, and OfferUp is actively hiring for a new CFO, we’re told.

Huzar characterizes these changes as part of the challenges with growing a startup and getting the right people into place.

“As the company grows up, so must leaders and so must the culture. I think a lot of times when you’re scaling businesses…you go through evolutions where leaders really need to evolve and change,” he says. “If you look to Bill Carr, for example, our COO, you know he helped build out Amazon Video from nothing to over 2,000 employees. We had nobody in the halls of OfferUp that had seen that scale before,” Huzar added.

There’s some admiration for Amazon’s culture, as well.

“There are clearly things that Amazon has done very well — like their ability to innovate at scale is unbelievable,” Huzar says. “We do think people [who] come out of Amazon have great startup DNA. They’re very scrappy. They dive deep into the business and understand things. They can think big. There’s a lot of value I think from that business that I really appreciate,” he added.

OfferUp also just hired former ChannelAdvisor VP Mark Vandegrift as head of e-commerce this month, as the company focuses on growth and scale.

But not all employees have been on board with these exec shakeups. More than a handful of employee reviews on Glassdoor and chatter on networking app Blind speak to various company culture issues, women being treated inequitably, negative office politics, and attrition — including among senior management.

In addition to the COVID-19 crisis, OfferUp may have needed to merge to scale and compete with the marketplace giants. User growth was slowing, for instance — the userbase was 42 million annual users in 2018 that only grew to 44 million in 2019. Presumably, slower revenue growth had followed. (Huzar declined to speak to current revenue and valuation.)

A combination of OfferUp and letgo could help to strengthen numbers outside of coastal cities, like Seattle, L.A., and Miami, where OfferUp was historically strong. Letgo was stronger in other parts of the country, like the Midwest, Huzar says. OfferUp will also bring its shipping business to letgo, which could be particularly helpful now as people are looking to sell household items for extra cash.

The deal is still subject to regulatory approval. If given, the combined businesses will be operated by OfferUp, headquartered in Bellevue, Wash. Huzar will continue to be CEO of OfferUp and chairman of the board. Oxenford, meanwhile, will join the board and serve as a senior advisor to OLX Group and Prosus.

Because the deal is still in the process of closing, the companies can’t speak to any team changes, including potential layoffs as a result of overlapping positions or other redundancies, we’re told.