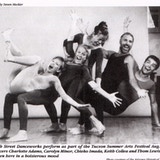 Tenth Street Danceworks reunites in “Once Upon a Time…” a new performance event that celebrates their irreverent brand of dance and their will to succeed against daunting odds.

From a downtown Tucson storefront to a self-built theater in the historic Y, to a world tour, and trading classes for rehearsal space, Tenth Street Danceworks’ 16-year existence produced highly regarded dance in Tucson. “…the breakthroughs are pivotal…every serious follower of the city’s modern development should see it” said Chuck Graham of the Tucson Citizen. This scrappy, young company was a prime mover of the Arizona Arts scene from 1984-2000. These dance renegades took audiences on a “journey through our most delightful and frightening passions” (Robert Cauthorn, The Arizona Daily Star).

Twenty years later, the company takes a look back as they look forward. This performance is not your typical dance concert but a celebration of the spirit of the company. By performing excerpts of our favorite choreographic works, presenting film, and telling stories that give an inside view of artmaking, friendships, and a unique time in Tucson, we strive to create a new kind of Tenth St Danceworks event. The performance details a pursuit of excellence and survival during a time in Tucson, described by the Wall Street Journal as “a mini mecca for the arts,” which was followed by a period of decline as fiscal conservatism retook the country and government grants for the arts began to disappear. This story is about working against the odds to continue to achieve artistic growth and excellence with a community of like-minded artists.

Friends and guest artists Doug Nielsen, Mitzi Adams, Gail Chodera, Jory Hancock, Melissa Lowe are appearing along with other past collaborators. The core company members involved in planning and performance are Charlotte Adams, Paulette Cauthorn, Keith Collea, Caryl Clement, Mark English, Chieko Imada, Thom Lewis, Carolyn Minor, Douglas Nielsen, Laura Rosenfeld, and Kevin Schroder. The fancy dance moves will primarily be left to a core of new, younger dancers in the Tucson arts community. Numerous dancers, choreographers, and other artists worked with the company during the 16 years of our existence and they are all invited to the celebration.

WE NEED YOUR HELP

Your donation, in any amount, will help offset these costs.

“Once upon a time…” will be 100% self-produced, and we are aiming to raise $6,000 through this campaign to help us cover SOME of the expenses of a total of $15,000. We are excited and nervous to be launching our first-ever crowdfunding campaign and are looking forward to connecting many people through the work.