Fake: a short film and a tall tale Based on a true story, "Fake" is about an Asian-American teenager's plan to impress a girl. It's foolproof—or so he thinks 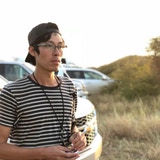 In order to impress the girl he likes, an Asian-American schooler devises a foolproof way to score booze, or so he thinks. Set in the suburbs of New Jersey, FAKE is a classic high school comedy that tackles some deep layers of Asian American identity.

THE STORY BEHIND THE STORY

I first heard rumors of this story whispered throughout basement parties in suburban New Jersey. It started as a crazy anecdote and over the years, the story of this particular kid became something of a legend in my hometown. I always loved the audacity and specificity of this Asian-American kid just trying to get what many boys in high school want: status and girls. He concocts a scheme to use a typically racist reaction to his advantage and while underage, tries using an older Asian guy’s ID at a liquor store to buy booze. Only then does he end up facing complications he doesn’t expect. As an Asian-American myself, I related to this kid’s struggle identifying with his roots while trying to fit in. At the same time, who wouldn’t admire this naive, ballsy hero who thinks he can pull off such a con?

As I told this story to other Asian-American kids, I was surprised by how many of them told me they had tried the exact same thing with someone else’s ID. And yet, we don’t see many Asian American protagonists in this very traditionally masculine, daring, rule breaker role in our films. It was then I knew I had to make this movie and I’m grateful and proud to be able to bring this small town tale to life.

PULLING A TEAM TOGETHER

As young creators in the film industry with no major funding we had a host of problems to solve. Without the resources of a formal student production (which comes with the the support of a university, like free camera equipment and insurance), we assumed all financial responsibility for the production of FAKE. Our cast and crew were our first supporters and we couldn’t have done it without their help, nor the help of many organizations who donated in-kind services.

For example, we didn’t have the means to rent expensive locations, but the manager of a liquor store I’d be going to for years agreed to let us film there. The city of Montclair, hometown to the filmmaker and many of the crew, welcomed our scrappy team with generosity.  We kept the snack and travel expenses low; with the constant support from our crew (as well as local family and friends) and finally got the film in the can.

Ben Grund is an Asian-American filmmaker from New Jersey, now working in New York. Prior work includes the screenplay for Walk the Earth (Cannes Short Film Corner.) He works for Oscar-nominated writer-director J.C. Chandor and develops film and TV projects with Chandor’s producers, Neal Dodson and Anna Gerb. He graduated from Colorado College (’14) with a B.A. in Religious History.

Originally from Italy, Federica Belletti is a writer/producer based in New York City. She is passionate about stories that spotlight issues of social justice and class, and that empower women. A 2019 Tribeca Film Institute All Access Fellow, some of Belletti’s producing credits include REFUGE (Refinery29 Best Film, NBR Student Award, Hollyshorts, Montclair Film Festival), NICE TALKING TO YOU (SXSW, Hamptons Film Festival, Palm Spring), HOW I LEARNED TO BREATHE OUT OF WATER. She holds an MFA in Film from Columbia University, where she was a recipient of the  Hollywood Foreign Press Association Fellowship, and the Arthur Krim Memorial Award for Excellence in Producing.

Natasha Badiyi is a New York based producer originally from Los Angeles CA. She studied filmmaking at School of Visual Arts before joining J.C. Chandor, Neal Dodson and Anna Gerb’s production company CounterNarrative. During her time there she Associate Produced Viper Club (2018) starring Susan Sarandon. Her other producing credits include Happy Valentine’s Day (2019) and In Sudden Darkness (2020).

Cedric Cheung-Lau is a New York–based filmmaker. He directed the feature film The Mountains Are a Dream That Call to Me which premiered at the 2020 Sundance Film Festival, and the short Topography of a Hotel (2015 Slamdance Film Festival). He was the chief lighting technician on a number of critically acclaimed films, such as A Girl Walks Home Alone at Night, Love After Love, Christine, and Patti Cake$.

HOW ARE WE GOING TO USE THE FUNDS?

Our goal is to finish the film and be submitting to film festivals throughout 2020.

The good news is is that the movie is almost finished. We’ve completed principal photography and need the funds to help cover post-production and finishing the movie. We will be using the funds in the following way:

The good news is this film is well on it’s way. We have finished principal photography so we just need you to help us get over the finish line. Post-production is a long process and submitting to film festivals is it’s own struggle as well. However, we have a great team dedicated to finishing this movie and bringing it to as many people as we can. Your contribution and/or support in sharing our campaign will help getting FAKE in front of an audience.