Injectable Drug Delivery Market is Projected to Reach $624.5 billion by 2021

MarketsandMarkets forecasts the injectable drug delivery market to grow from USD 362.4 billion in 2016 to USD 624.5 billion by 2021, at a Compound Annual Growth Rate (CAGR) of 11.5% during the forecast period. 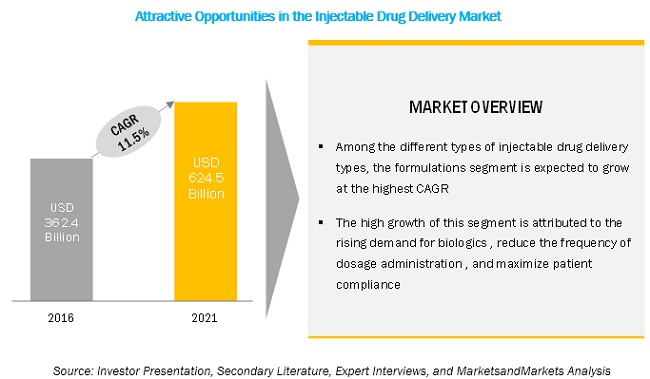 The major factors responsible for the growth of this market are the increasing use of biologics, increase in the prevalence of chronic diseases, increasing occurrence of needlestick injuries, and the benefits of injections (convenience, ease of use, and reduced pain). These factors have increased the demand for devices such as safety syringes, prefilled syringes, and autoinjectors.

According to the American Journal of Managed Health Care, biologics form the fastest-growing segment in the pharmaceutical market. An article published by PHARMAC stated that between 2007 and 2012, the global spending on all medicines increased by 24%; in the same period, the spending on biologics increased by 367%.

Biologics currently account for approximately 70% of the top-10 selling drugs in the world (Source: BioPharm International). Considering the significant demand for and potential of biologics, market players are focusing on undertaking strategic developments to leverage the growth opportunities in this market segment.

According to Guttmacher Institute, in 2012, around 1,697,000 women used injectables for contraception in the U.S. Noristerat Injection is a reversible method of prescription birth control, which is common in the U.K. and other parts of Europe.

Many new products are being launched in contraceptive injections. For instance; in September 2015, Pfizer Inc. launched Sayana Press, the first injectable contraceptive in the U.K. for administration by self-injection.

North America to account for the largest market size during the forecast period.

North America is expected to hold the largest market size in autoinjector market during the forecast period, followed by the European region. Factors such as the increasing incidence of chronic diseases, growth of biologicd market, and increasing demand of self-injection devices.