Along with each new song release Preston Hudman likes to give us an update on his companies progress as it grows. The song being released this time is under a new artist name called “Cyber Hitler” and the song is called “Thank You Instagram”. Preston Hudman and his mother Kris sell verified comments those are comments made by celebrities who have blue check marks next to their name on Instagram. Kris owns a company called Tube Homie (www.tubehomie.com) that fuels many of Preston’s other business such as Influencer marketing gigs, brand account management and consulting and selling blue check comments. The services provided by Tube Homie are touted as real and the fan base that is built out of buying their services is a human one that will actively engage with you. It is for this reason that seoclerks DOT com chose to offer a partnership of sorts to Preston allowing him and only him to sell certain disallowed services in the marketplace when others could not and Preston wants to reveal what the experience was like. The image intended to be included with this article is showing a message sent to Preston after he had explained why he should be allowed to sell services that they disallow such as blue check comments and other real services such as likes, views, etc. the image can be found here… 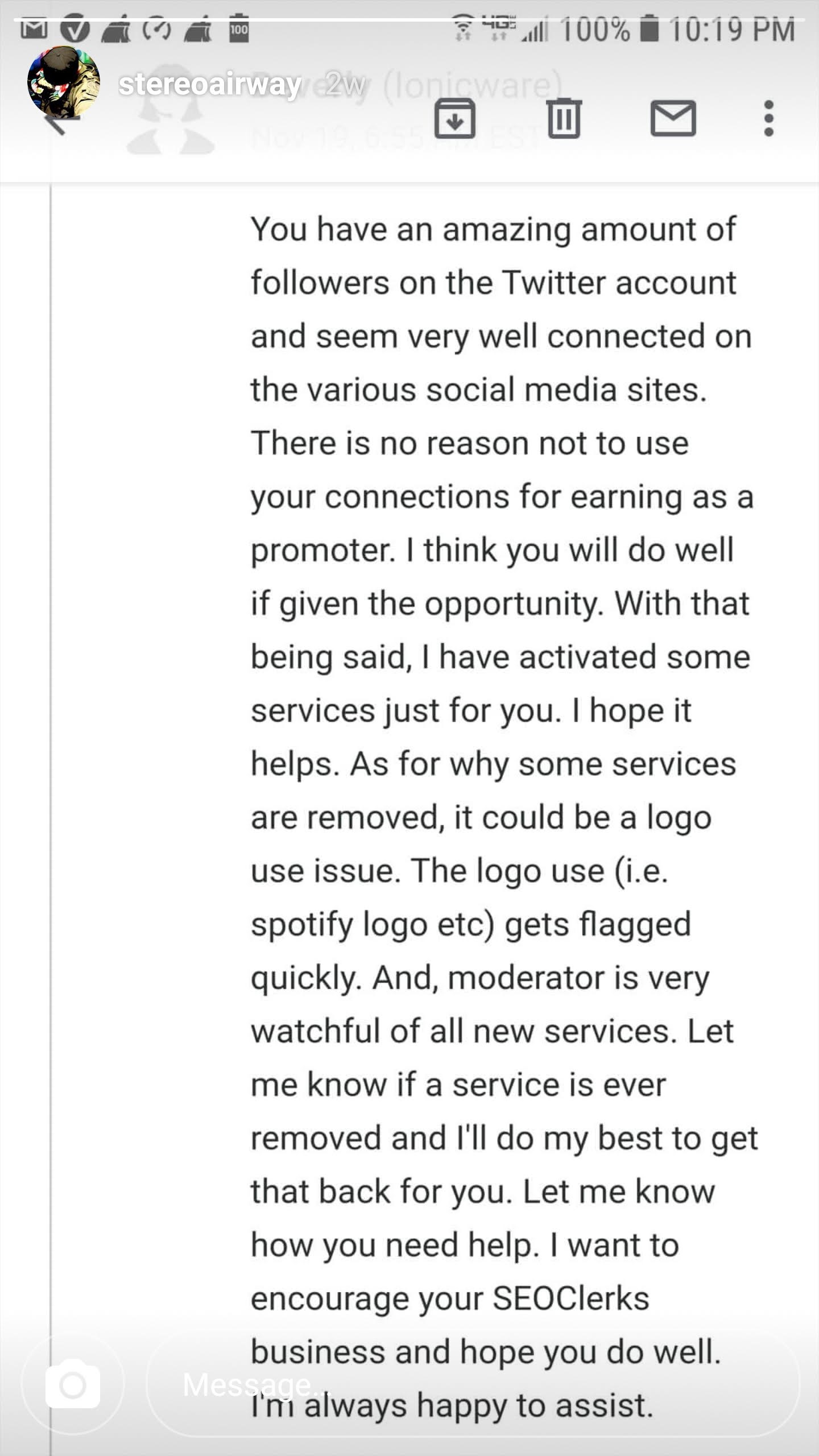 …as You can clearly see they were quite impressed and taken with the quality of the man and his services and why it ended badly is truly a shame because many customers were finding their way to tubehomie on seoclerks and buying the verified comments and now its impossible to do so. seoclerks literally banned Preston and stole not only the $100+ dollars in sales that he had made and was owed but the $39 he had in his account due to a refund was stolen too. They literally made him sell a bunch of stuff, keep the money all for themselves including the money in his own pocket basically, and banned him without ever speaking to him again and to this day they will not speak to him. This caused pure pandemonium on seoclerks Dot com where now all of Preston’s customers who had paid for his services are upset that he never got the money, and they are all demanding refunds but not getting them. Instead, they are getting lied to and then stonewalled and not allowed to sell services either. Anyone who lists verified comments gets taken down, and they now email verify every service that gets listed. So at least half a dozen customers left with Preston, and he has since taught them how to resell services just like he used to, and they are trying to sell on seoclerks but like I said they are blocked from doing so. They even lied to the customer and told them that Preston would get his money but they (seoclerks) seems to have zero intention of actually doing so…

…this is quite a terrible way to treat customers and run a so called business… Sounds more like seocrooks DOT com to me.

So Preston says he got banned and thus robbed for clear over $100 cash because he got a complaint made on him by a customer who he had argued with on Instagram. Because he was selling group joins it’s a very personal experience since you are purchasing the right to be included in a group full of celebrities and i suppose if you just can’t get along with the group members things can go poorly for you. Preston says a lot of buyers were just there to get free samples and promote themselves to the group members and had no intention of buying anything. This one customer however who argued with Preston had done some very disrespectful things like telling group members’ information about Preston’s Business that Preston told him to keep a secret thinking that he could be trusted… only to then be betrayed after some friendly ribbing. You can see the actual joke Preston said to upset the customer in the first place right here…

So Preston kicked him out of the group for being such a poor sport and launching an attack against him and his business. IMO they (seoclerks) could have simply given the customer back his money and not chosen to steal over $100 from Preston. It turns out that seoclerks does not refund money back out side the website, and they will seemingly ban every time before having to pay out sellers.  They have lost 8 customers says Preston and it will only get worse as time goes on and these articles get published. Why go to seoclerks when you could instead go to tube homie DOT com where they sell everything seoclerks does and more! Plus you get to meet the actual people running the place instead of dealing with mysterious companies such as ionicware and seoclerks (ionicware owns them and a bunch of other sketchy sites) These sellers found in each ionicware marketplace are faceless foreigners 99% of the time and all have similar or identical listings and tbh it would be totally possible for all of them to be just one person, the owner of seoclerks, and nobody else is even involved. Lol, however unlikely the possibility exists due to the unscrupulous business practices they use. With Preston Hudman, you get an old-fashioned hands on approach that takes care of you. TubeHomie Is now the only place to buy Verified comments for only $4 each! Stock up on them before Instagram makes the price of comments go through the roof by hiding the like and view counts. You are still likely to get comments from @kingjamesworthy @saisentg @scott_henshall and so many more celebrities. Scott made the most expensive dress in the world for crying out loud and is a dear friend of Preston’s so join Tube Homie now if you can and start meeting these great people… they will help you.

Boiler Plate:
Preston Hudman is an entrepreneur who builds businesses around social media and who is a mentor to an extraordinary amount of verified users on Instagram as well as other Influencers  across all platforms. Please visit www.prestonhudman.com or reach out to him on Instagram @prestonhudman