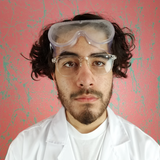 Dopamine is a neurotransmitter in the brain that is largely associated with pleasure and reward.

Dopamine Playing Cards is a deck of cards that uses the turquoise/pink color scheme with a clean circle design. As for the concept of dopamine, there have always been unique ways that Cards, Magic, and Cardistry play into the idea of pleasure and influence. However, the concept largely ties to the color and design of the deck above all else.

What do You get?

Each product option comes with more than what you might expect. All pledge levels include a Dopamine Sticker, a Duplicate card, and a Flap card. Also, the more decks you get, the more perks you receive and the cheaper each deck becomes.

A Flap Card is a card gimmick that is used to do Magic Tricks. It allows you to visually change one card into another card.

With each purchase of a deck, you will also receive a flap card(s) that you can use for magic. Included is the gimmick card along with video instructions. Alone, flap cards usually sell at $10-20 in most magic stores. Here, it’s included free.

A duplicate card is exactly what it sounds like. Many magic tricks can be done with a duplicate card. With Each deck, you will receive an additional card in a small envelope for free.

The decks will be printed through United States Playing Card Company (USPCC) on crushed, classic paper stock with air cushion finish. Most importantly, the cards will be printed with Pantone colors which are much more vibrant than digital, CMYK colors. The cards seen in this project are prototypes in CMYK, the final product will be even brighter and more colorful.

This reward offers videos to all the methods behind original tricks, gimmicks and cardistry performed in the project. You will gain access to behind-the-scenes video during every step. Yes, any electronic gimmick used throughout this whole project is taught in complete detail. This reward is an exclusive for pledges of 6 or 12 decks.

As a magician, I have created many magic tricks that involve a condom. So I decided, why not make my own? I intend this reward purely as a collector’s item as it ties in well with the concept and storyline. However, you can use these. This reward is an exclusive for pledges of 12 decks.

Realistically speaking, the only challenge regarding this project may be the time that the United States Playing Card Company (USPCC) takes to print and ship the cards. However, I will do everything I can to get the cards to you as soon as possible.