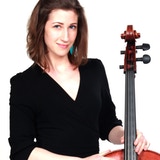 My name is Susanna Mendlow and I grew up in Brooklyn, NY in a house full of music! I danced and sang my way through childhood, often inventing lyrics to the Chopin nocturnes my mom played on piano. When I discovered the cello, I eagerly transferred my musical passion to the instrument, falling in love with its rich voice and extensive range. Many years of schooling later, I still am enamored of the cello and enjoy making music professionally.

What am I Recording

The purpose of the album is to demonstrate the versatility of the cello and expose listeners to music they might not encounter on their own. The program represents the breadth of my musical interests, including works by modern composers, arrangements of non-western music, cello music considered to be outside the core canon, and an adaptation of a violin sonata. My hope is that listeners will be inspired to further explore one or more of the many styles featured on the album.

Composed in 2009, this concise work for solo cello introduces two independent musical ideas that converge and then ultimately weave together. Julia writes that “the composition also evokes the imagery of Navy Signal Flags often used in my father’s paintings. I was compelled by the flag’s fixed symbol over a moving texture. The music strives to evoke that duality.” This piece, which is beautifully written for cello, is a perfect introduction to modern classical music.

This brief work was written in 2012 as an encore to Dvorak’s Cello Concerto. Noam writes, “I turned towards rendering a hidden space in romantic settings and interactions: the distance between words when we have something to say but feel compelled to hold back. For me, this space between words can include musical dualities like assertiveness/restraint, excitement/hesitation, and tension/release.” With its long lines and mostly tonal movement, “Between Words” exhibits a different facet of contemporary classical writing.

Tsintsadze composed this small collection in 1950 while studying cello and composition at the Moscow Conservatory. Born and raised in the country of Georgia, Tsintsadze infused many of his classical compositions with the melodies and stylistic elements of his homeland. These brief works demonstrate Tsintsadze’s deep understanding of the cello’s technical potential as well as his ability to develop sweeping lyrical lines. I am thrilled to record these works with my colleague Stefan Petrov, who brings a unique and engaging perspective to the piece.

The so-called founder of “tango nuevo,” Piazzolla was famous for integrating elements of jazz and classical music into his music. In “Milonga sin Palabras,” Piazzolla introduces a beautiful lamentation above the steady milonga pulse. I am delighted to premiere this arrangement by the wonderful cellist Jorge Espinoza!

I discovered this piece while preparing my dissertation recital at a residency in Brush Creek Ranch, Wyoming. The solo part for this type of music is usually played on the gadulka, a traditional Bulgarian instrument that looks like a cross between the violin and the lute. A daichovo horo is a circle dance with an uneven meter (2+2+2+3) that is played at rip-roaring speed. Much of Bulgarian folk music has been passed down orally, so I transcribed the recording (from the album “Bulgarian Folk Dances” conducted by Hristofer Radanov) before arranging it for cello and piano.

Dubbing the piece his “wretched sonata,” Mendelssohn discarded this work in favor of his E minor violin concerto, which was composed in the same year and garnered much success. As a result, it is the least known of his three sonatas for violin and piano. Upon falling in love with the second movement of the sonata, which somehow manages to express deep sorrow and longing in a major key, I decided to arrange the entire work for the cello. The piece is originally in F Major, but I have transposed it to B-flat Major for greater facility on the instrument. My colleague Michael Angelucci brings both sensitivity and precision to the virtuosic piano part.

A little more about my inspiration for the album…

While I am classically trained, I always have been fascinated with music that stretches beyond the standard repertoire for cello. My musical explorations have taken me across the world and throughout different realms. During graduate school I fell into the experimental jazz crowd and co-formed Moyindau, a group that integrated ethnic folk music with contemporary classical compositions and improvisation. As a part of this quirky ensemble – a combination of saxophone, cello, piano, and drums – I spent hundreds of hours learning to play my instrument in different ways. Down came the walls of western classical training, revealing a world of new tunings, creative sounds, and greater overall flexibility. It was not until we traveled to the most remote regions of the Kyrgyz Republic and Kazakhstan that my drive to pursue these new findings truly took flight, however. Having caught the bug, I subsequently spent much of my doctoral studies exploring music not traditionally played on cello. My journey included composing works for cello and voice, developing structured improvisations, adapting non-classical works to the cello, and appropriating classical works written for other instruments. In expanding my stylistic range, I found that my approach towards canonical works evolved as well: I became less concerned with creating the “correct” interpretation and allowed myself simply to enjoy playing.

Since moving to DC in 2015, I have continued my musical adventures at full throttle. As a member of QuinTango, I have brought tango to the diminutive island of Sark and explored the genre’s contagious rhythms with middle school orchestra students. I have joined my colleagues of Kassia Music in discovering hidden classical gems as well as introducing newly composed tonal music to the field. I also continue to adapt some of my favorite violin pieces to the cello and expand my library of world music arrangements.

The money you donate will help cover recording and editing, hall rental, piano tuning, production, Kickstarter fees, promotion, collaborating musicians, and other related expenses. For a more detailed breakdown of the budget, please feel free to PM me.

It will take some time to go through takes and edit the project, so there might be some delay in moving past this phase. I will do my best to keep everything on track so that you can enjoy your rewards!