Premium economy segment of the aircraft seating market is projected to grow at the highest CAGR during the forecast period. The growth of this segment can be attributed to the increasing demand for premium economy seats by travelers owing to the cheaper ticket value in comparison to business class seats.  Emirates has announced a new premium class to be rolled out by 2020. On the other hand, Singapore Airlines will be cutting the number of first-class seats on its next A380s, while the German airline Lufthansa will do away with the first-class cabin completely in its new Boeing 777-9s, leaving business as the highest class on select flights. These changes reflect a shift in trends that place business as the new first class, and premium economy as the new business class.

The narrow body aircraft segment is projected to grow at the highest CAGR during the forecast period. This segment’s growth can be attributed to an increasing demand for narrow body aircraft from low-cost carriers in emerging economies. Low-cost airliners tend to procure narrow-body aircraft, owing to their need for short distance travel and the aircraft’s easy maintenance. This has increased the demand for narrow-body aircraft, directly affecting the aircraft seating market. Over 11,000 single-aisle aircraft deliveries were scheduled for the Asia Pacific region in 2017.

Increase in narrow body aircraft deliveries from 2016 to 2027: 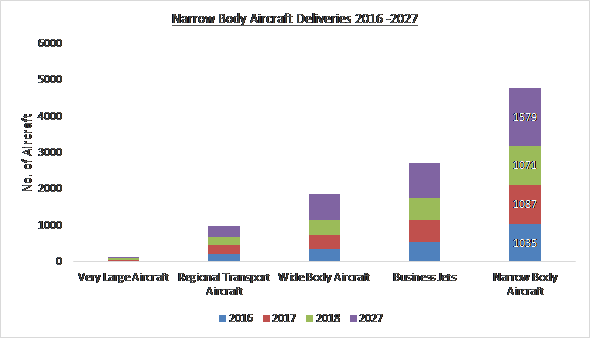 Based on end use, the OEM segment is projected to lead the market during the forecast period. The growth of this segment can be attributed to the fact that the customization of aircraft seats according to the requirements of airlines before the aircraft’s delivery is easier as compared to their retrofitting. Several airlines buy new aircraft, especially the narrow-body models such as B737 and A320, which are installed with new seats.

The Asia Pacific aircraft seating market is projected to grow at the highest CAGR during the forecast period. The market growth in this region is largely due to increase in air passenger traffic from countries such as India, China, Japan, and Indonesia. The region has been witnessing growth in domestic travel since the last decade, which has led an increase in aircraft deliveries mostly for low-cost carriers. Emerging markets require new aircraft to meet the fast-growing traffic demand. Hence, new airlines are being launched in emerging economies, such as India and China, where passenger traffic has been increasing at an above average growth rate.

Market for 16g seats is estimated to grow at 11% CAGR during forecast period. 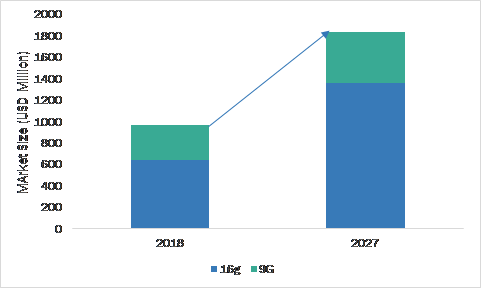 The competitive landscape chapter provides an overview of the prevailing competitive scenario and benchmarking of growth strategies adopted by of key players. This chapter offers a comprehensive micro quadrant analysis of more than 30 players in seat manufacturing industry and start-up matrix for start-up companies in this industry. It provides the positioning of players as visionary leaders, innovators, emerging companies, and dynamic differentiators.