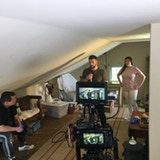 Hi fans, We are ColemanFilms, the two brothers and amazing our film crew that brought you “Halloween Inferno”. We have a great love film making and especially the Halloween franchise. The reason we decided to start a Kickstarter is because of how Well “Halloween inferno” was received by the fans, so we thought lets make a part 2 and while we’re at it lets make it even better. Part one was financed out of our own pockets and as much as we would love to make part 2 right away it can become very expensive. Our goal is to raise enough to cover basic production costs without breaking the bank and give the fans what they want to see without Hollywood. It has always been our dream to be working on a Halloween film set we want to make something so good that Hollywood will have no choice,but to get us involved inthe next one.
Here is “Halloween Inferno” (part 1)https://youtu.be/SS09GXc4AZo

Halloween Inferno went over budget and was completely out of pocket. We are just hoping to get a little help from the fans.