12th Man: A short film Scottish short-film about two young gay footballers struggling with their identity and place within their local team 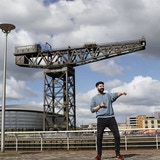 In the ultra-masculine environment of Scottish amateur football, star players Angus & Charlie struggle to come to terms with their relationship, sexuality, and place within the team. On the day of the most important game of the season, can the team & gaffer accept who they really are?

At the start of the year, we ran a lot of steps. This went a long way to providing funds for the film, whilst also allowing us to donate a significant sum to Stonewall UK // Stonewall Scotland to continue their exceptional work.

So then what is this for and why is it different?

The beauty of this kickstarter is we’re already so close. The countless hours of pre-production and filming; the speed bumps along the way; they’ve all been conquered. It’s not all plain sailing, of course not, but now we are almost at the most important part: sharing our film.

By donating to this kickstarter you will give this film the best possible chance for it to be seen, by as many people as possible. We believe films like these are essential in breaking down barriers of bias and banishing discrimination from our culture.

As part of our fundraising we’ve got a ton of terrific benefits that come with your donation. From an ‘early look’ at the film and invites to the screening, all the way to owning a strip from the film or an executive producer credit.

Sport can bring an incredible sense of community and to think some people don’t have access to this due to discrimination is truly tragic. If this film can open doors or help even one person who may be experiencing the same situation – then that’s what it is all about.

Over the course of a weekend in October, we filmed 12TH MAN: a Scottish LGBTQ+ short-film about grassroots football. Due to the exceptional kindness of Partick Thistle Football Club & Firhill Complex in Glasgow, Scotland, we were able to film in as authentic a location as you could possibly get.

Our team, “Eastfield FC”, were an eclectic mix of actors & footballers who gave unbelievable energy and passion to the long filming days. A few of them had even recently won a cup final, similar to the events of the film… and they weren’t shy in letting us know at every opportunity.

The level of collective talent and experience in our crew is still astounding. The pictures here only scratch the surface of what they have collaboratively created.

Lorn Macdonald’s most recent film role as Spanner in BEATS saw him receive the Scottish BAFTA for Best Actor in Film. A 2015 graduate of the prestigious Royal Scottish Conservatoire, Lorn has a wide collection of stage & screen credits including: Orestes in Oresteia: This Restless House and Renton in Trainspotting. TV credits include acclaimed shows such as: Shetland, Outlander, and the upcoming Deadwater Fell on Channel 4.

Guy has been awarded The Laurence Olivier Bursary Award for his graduating year at The Royal Conservatoire of Scotland.

Mark McKirdy is a trained actor graduating with distinction from Edinburgh college.

Recent film credits include ; Mark (The Barge People) which premiered in Leicester Square as part of the annual ‘Frightfest’ festival. Detective Noonan (After Dark). Zero 5/Alec (Regnum Defende). Mark is thrilled to be part of 12TH MAN. It’s an excellent script with a very important message. He hopes it can open up and start new conversations on the subject matter.

Caitlin Black is a director and moving image artist from Glasgow. A graduate of Fine Art at Central Saint Martins College of Art and Design, Caitlin produced mostly experimental art films, one of which led to a collaboration with Shia LeBeouf on his LaBeouf, Rönkkö & Turner led film project #INTRODUCTIONS, covered globally from The Guardian to Dazed Digital.

After graduating her debut short drama, Middle Passage, which was backed by the BFI and O2, premiered at the 2015 London Film Festival. Later, she received a Best Director nomination at the BFI Future Film Festival, 2016.

Jack Gemmell is a writer + producer, based in Glasgow. He graduated from QMU Drama + Performance in 2015 and is currently working @ STV. 12th MAN marks his preliminary screen credit, but previous writing credits include THE RAVEN + Swiss Cheese, both at the Edinburgh International Fringe Festival.

Aidan is an award-nominated Creative Producer based in Glasgow. Aidan’s credits include commercial clients like House of Fraser, Glasgow City Council and DF Concerts at STV Creative for 3 years. Additionally he has made content for the BBC Social and for his own web platform Walk>Talk Productions. Aidan has also set up his own production company, FORMED, where he’s been working closely with the cities’ best directors to make content for the likes of Film4 and Ladytron.

What your donation will do?

Filmmaking is an expensive business. However collectivism really does add up. We’re not expecting a huge investment from one person, but instead small kindnesses from the LGTBQ+ community, its allies, friends, family, and beyond.

The funds raised will go towards post-production: edit / sound / music / colour / VFX / everything that goes into constructing the film after it’s shot.

The funds raised will also be vital for getting the message out there. We are hoping for a good festival run to give us the opportunity to promote inclusivity in football. By donating, you will help us pay for festival submissions, posters, marketing materials, and everything else we need to shout about the film.

The simple fact that there are no openly gay players in top flight football across Europe should give us pause that something is inherently wrong with the culture it surrounds itself in. Why there are no homosexual players and what is causing them to either stay away from the sport or hide their sexuality altogether. Hopefully this film can, in a way, continue the fight for a more accepting culture in the beautiful game.

Follow us on social to keep up to date with the 12TH MAN:

As with all film-making, there are risks and challenges. We are very close to completing the film though which takes a lot of the traditional risks out. The hurdles we have now are to pass the film through edit, grade and sound. It takes great care and we want to pay for the best so this film has a chance at being seen by as many people as possible.