Omega Black Vol.1 Manga (Chapters 1-15) A child comes to earth from a distant planet, unaware that he's the key to balancing the universe 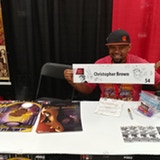 We’re running this Kickstarter campaign to help fund The Omega Black Vol 1. Manga. This is the first graphic novel of the Omega Black series and will include chapters 1-15. This graphic novel is in a traditional Japanese format and will read from right to left.  Why? Because we love manga!

The great kingdom of Planet Omega houses the Omega Stream, a mysterious energy force that grants immeasurable powers. This planet is ruled by the Orion family, led by the eldest Jafar and his younger siblings, all of whom possess a connection to the Omega Stream. We join this story during a pivotal time in Planet Omega’s history; the dawn of the next generation and the twilight of the previous one. Conflict stirs between siblings while a child enters the world, unaware of the burden and responsibility that has been thrust upon him.

Hi, my name is Christopher Brown. I’m the writer and creator of the Omega Black series. I’ve been a fan of comic books and mangas for most of my life. I remember when my older brother gave me my first comic book. It was a Spawn comic created by Todd Mcfarlane. That lead me to get into other characters like Superman, Spiderman, and The Teenage Mutant Ninja Turtles. Then in 1997, I finally got my hands on a Static Shock Comic, which was published by DC and created by Milestone Comics. Later in the late ’90s, Dragon Ball started to air in my area Which is a Japanese franchise created by Akira Toriyama. This animated tv show introduced me to the character Son Goku and his friends. I was lucky enough to have a local store that allowed me to rent VHS tapes of the English subtitled version of the Dragon Ball Z and the Wixxzine magazine for only $5 a week. Akira Toriyama taught me about the difference in character arcs. Son Goku is an example of the flat character arc. The flat character arc is a character that already believes in the truth. It was this storytelling that leads me to other stories like Tenchi Muyo, Full Metal Alchemist, Naruto. I always wanted to tell a story that will inspire others, just like the stories that inspired my childhood.

In 2017, I started working on the Omega Black series. I wanted to make a series that provided the same incredible intensity as Japanese Shonen Manga, but with my own words and characters. I also wanted this series to be fun, entertaining, and full of escapism for those who read it. In this story, readers will follow a young kid named James Reed. A boy from sent from another planet to survive and live amongst humans. He doesn’t know that he’s an alien, nor that he has this incredible power. Then a series of events causes him to tap into his skills for the first time. He then has to balance himself between being a kid, coming to terms he’s not a human, and making the best decisions that will make him a great hero. I originally intended for this series to be a fusion between American style comics and Japanese manga. The purpose of this method was to give readers a longer comic book to read, unlike mainstream comic books. The big problem with this method is that comic book stores would have to purchase every single issue, and readers would have to what for each item to release.

In my opinion, I believe the way we digest entertainment by bingeing. Just like you have seen with Netflix and Hulu, viewers would rather binge-watch a series than wait for the show to show release. So I want to apply that same method to Omega Black. Now readers will be able to read Omega Black by the volume. Meaning each graphic novel will be a new saga to the series. Each book will be 15 chapters long and will introduce more characters and universes as time goes on.  Omega Black volume 1 will have over 2,500 pages and will be formatted as a traditional Japanese manga. I believe changing the format of Omega Black will give readers a more authentic manga experience.

All future pages are going to update throughout the campaign. Backers will get an in-depth look at how we’re putting together this great story and hopefully give you a bit more detail about our creativity and storytelling. If you’re any confusion about our campaign, then please make sure you get in touch with me.  My email is [email protected] I’ll answer any question to the best of my abilities.

Risk: The most significant risk of this campaign is not meeting our budget goal for this project. If we don’t meet that, then it will be longer for us to get this story out to you the audience’s hands. Benefits: We already have the entire script done for this project. So once this campaign is successful, we can fund our artist to work the interior. Challenges: We’re a small production company and still new to the industry. Some people will hesitate about picking up one of our products. Benefits: We had a great 2019 tour. We met a lot of people and made friends. Although we had a great year, we still need help from you, the fans, and readers to spread the word about our story. Outcome: If we can get this funded and out to our audience, then Omega Black will be considered the longest graphic novel in the industry.