Kelly Fraser - Decolonize Album I need help to fund my album Decolonize, in the genre of pop/hiphop/rock telling the story of colonialism of Inuit/Indigenous people 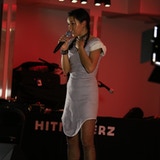 I am Kelly Fraser, a multi-discliplinery Inuk pop singer-songwriter, throat singer, traditional drummer and bassist hailing from Nunavut, Canada. I am currently an unsigned independent artist working with producer Izaak Wapachee, a backing band and a variety of other featured artist. I have been nominated for a Juno Award and an Indigenous Music Award and this year I won an Inspire Award for the music I make and the songwriting workshops in Inuktitut (the Inuit language). I joined a band and started performing when I was 15 in 2009I released my first album Isuma when I was 20 in 2014 with songs with mostly original contentI perform all over North America and planing to perform more in the United States.

I believe Kickstarter is a community that cares about artists and I am ready to get that support!

I am here to ask you all for $60,000 to help create and market my upcoming album Decolonize. From January to May we will be vigorously writing recording the album and releasing singles throughout the process in Toronto, Ontario here in Canada. The reason that I need to make this album is to showcase my talents, to further strengthen my Inuit culture and language and to educate others about the trials and tribulations that happened on this land.

DECOLONIZE will be produced by Isaac Wapachee

Without you I would not be here, without you streaming, listening to my music, buying albums, going to my shows. You will become a part of the music making magic that happens by helping fund this incredible album that WILL win music awards. With your generous backings we look forward to this project reaching each and every one of you.

I care about making music to uplift my people and everyone around the world. I have been told my music has touched people and saved people and I want to keep that going. The songs from “Decolonize” will touch on; the history of colonialism among me and my fellow Inuit people, forced relocations, slaughtering of sled dogs, the relationship Canada has with Indigenous people and will try to curate and promote healing through music and gatherings. By us all coming together to fund this project as Indigenous and non-Indigenous people we are doing our part for reconciliation in Canada. “Decolonize” will incorporate traditional Inuit music like throat singing and traditional Inuit drumming mixed with state of the art modern recording techniques and genres such as rock and electronic music to ensure they’re successful on the market.