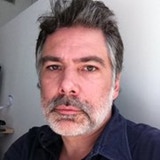 Hey Robot is a party game where two teams compete to get their smart speaker to say a specific word. It’s a bit like Codenames or Taboo, if the friend you were playing with had an encyclopedia and was also very, very drunk. It’s a hilarious, smart and strategic game for people who own a Google Home or Amazon Alexa and have no idea what the heck to do with it.

Hey Robot is created by Everybody House Games — Hilary, Mara, Frank  and James Lantz. We’re a family that’s been making games for decades, including Universal Paperclips, Invisible Inc and Drop7. We’ve always been obsessed with board games and the funny ways we interact with technology in our day-to-day lives. Hey Robot is the intersection of those interests and the result of months of trying to invent fun things to do with our Alexa.

Hey Robot plays well with any group size, from 2 players up to as many people as you can fit around a flat surface.

At the beginning of the game, you deal out a grid of cards with words on them. Then teams alternate trying to capture a word by asking The Robot a question that will get them to say that word in their response. (They can’t say any form of the word in their question.)

After a brief huddle, they decide to ask: “Alexa, what is a creature that is scared of sunlight?” hoping Alexa will say the word “vampire” in her response. Instead, she’ll tell you about heliophobia — the fear of going out into the sun. Groan. Because they missed with their question,  Team 1 puts a bonus point token on the VAMPIRE card, increasing its value.

Now it’s Team 2’s turn. After some deliberation, they choose VAMPIRE as well. They ask:  “Alexa, who is Dracula?” Alexa answers,

Boom! Everyone cheers because Alexa said the word “vampire” in her response. Team 2 gets three points — the two points printed on the card, plus the additional bonus point token. Now they must add a bonus point to one of the four cards touching the card they just captured.

They might choose GLASS because they think it’s the hardest word to get, or they might choose MARSHMALLOW because they have an idea for how to capture it themselves. Now it’s Team 1’s turn again, and the game continues in this way until one team has earned 16 or more points and reigns victorious.

The game is really that simple. But while the rules are easy to understand, achieving a mind meld with your Robot can take a lifetime. Alexa and Google are both the smartest and stupidest people in the room, so asking the right question in the right way requires knowledge, cleverness and strategy. When you get it right there’s cheering. When you get it wrong there’s laughter, because the answer is usually hilarious.

*Basically, we started with the entire English language and then narrowed it down to the ones that made us laugh or feel clever and weren’t absurdly hard or way too easy.

Hey Robot does NOT include an Amazon Alexa or Google Home! You will need one of your own to play the game. The game also works well with other smart speakers like the Apple HomePod or any speaker that has Alexa or Google Assistant built in.

Hey Robot is easy to set up and explain to your friends, so you can start having a great time right out of the box! You’ll laugh, you’ll cheer and you’ll finally have a use for your Robot that isn’t just setting timers.

A NOTE ABOUT SHIPPING

Everybody House Games is a family company. Frank and James are professional video game developers, while Hilary and Mara chose to become actual productive members of society. But that means they don’t get a hyperlink on their names in this Kickstarter, so who’s laughing now?

Our favorite board games have always been simple, fun and social — games like Hanabi, Codenames and Skull. We made Hey Robot in that tradition–it’s the kind of game we always want to have around when we’re hanging out.

Hey Robot is our company’s first professional board game. Board games have been such an incredible and positive influence in all our lives and we’re so pumped that we might get to add one of ours to the world. We’re really grateful to be able to share this moment with you guys through this Kickstarter.

We’ve been testing this game for over a year, so we’ve fine-tuned the design and know that playing the game is super fun.

We’ve also spent months working on the physical design of the box and the cards and are confident that we’re going to be able to deliver a final product that looks great on your shelf and feels great to hold and play.

This will be our first time producing a board game but we’re looking at various very professional printing and fulfillment solutions including AdMagic and Blackbox who have manufactured and fulfilled huge games like Cards Against Humanity, so we’re in good hands. We don’t have any complex gimmicks or fragile pieces so our manufacturing process is pretty straightforward.

We have several lifetimes of experience delivering polished and fun video games. Board games are a different beast, of course, but we are confident that we will able to give backers a high-quality product in a reasonable timeframe.