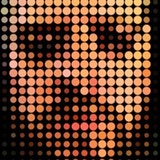 Receiving national music press coverage without releasing any recordings Flowered Up (Liam Maher, Joe Maher, Andy (Jacko) Jackson, John Tuvey and Tim Dorney plus on stage dancer Barry Mooncult) were thrust directly into the independent music spotlight, being labelled as London’s answer to The Happy Monday’s. With stories of being banned from hotels across the British Isles after playing unforgettable chaotic gigs to adoring fans the band continue to have a cult following to this day who have hazy memories of those nights, often dancing on stage, lapping up the madness that surrounded them.

After writing a highly successful on line article where he interviewed band members and friends of the band Louder Than War freelance journalist Matt Mead has come into contact with hundreds of photos taken at these gigs by the bands entourage plus many fan photos and associated memorabilia.

Having interviewed the likes of Suggs (Madness), Clive Langer (producer of Weekender), Paolo Hewitt (biographer of Oasis) and many of the fans, a book; Flowered Up: A Weekenders Tale is set to be the first book published solely on the band, 30 years after the band’s first release on Heavenly Records, with the help of The La’s publicist Dave Hewitson (80s Casuals/Eighties Vinyl).

With your help we are looking to fund the project via Kickstarter. With your pledges you will receive the 120 page book, limited to 200 copies worldwide, made to the highest quality. The book will feature many previously unseen pictures of the band plus stories from those who were fortunate enough to be in and around these high times. As you can imagine this book will be a collector’s item for all fans of the much loved 5 piece, (6 if you include Mr Mooncult), a book like no other.  Those that back the pledge to buy the book will also recieve a free t shirt and either single badge or badge set, both of which will be sent to the pledger at random.

Dedicated to brothers Liam and Joe Maher who tragically died in the early 00’s plus their mother, who died peacefully last year, the book is produced in cooperation with Liam and Joe’s family, who sorely miss these men simply known to them as their own son’s, brother’s, father’s and spouses.

This has been a real labour of love for Matt, something that he didn’t ever foresee being involved with having never produced a book before. However, with the encouragement of family, friends and Dave, he has a firm vision for the book to be produced in dedication to Liam and Joe’s family, for them to have something tangible to remember their much missed family members, especially those unforgettable never to be repeated nights where they gave unconditional affection and friendship to others in the early years with Flowered Up. We hope those that purchase the book will sense that feeling flowing throughout the document.

Without reaching the desired amount sadly the book cannot go ahead, i hope we can achieve the target!