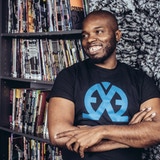 Haven’t read the previous books in the series yet? No worries! This Kickstarter (E.X.O [Vol 4] – Wrath of AVON) contains all previous volumes (1, 2 and 3) of the E.X.O. series at heavily discounted prices!

We’re Funded! Yay! BUT… We Still More To Offer!

EVERY BACKER gets this BONUS comic once we hit $10,000

E.X.O. – The Legend of Wale Williams is an award-winning, science fiction superhero story about redemption, set in a near-futuristic Africa (Lagos, Nigeria). Volume 4 is a 144-page graphic novel)

Volume 4 of the graphic novel is COMPLETE! The plan is to ship the books & rewards three weeks after the Kickstarter is hopefully successfully funded.

The Wrath of AVON (Volume 4)

What happens when you infuse the likeness, ambitions and desires of ancient and legendary warriors/conquerors — Masna Musa, Sonni Ali, Hannibal, Alexander the Great, Julius Caesar, Genghis Khan, Napoleon and more — with an advanced AI? Well, you get a psychotic android who goes rogue and concocts a plan to “reset” humanity! An android named AVON!

Volume 4 of the award-winning E.X.O. series picks up right where volume three left off with EXO, aka Wale Williams, the savior of Lagoon City, trying to make sense of the crushing physical, psychological and emotional defeat he suffered at the hands of AVON. Before Wale and the rest of the team have a chance to recover, they discover that AVON has accelerated his timeline for the completion of a biological weapon said to be capable of enslaving the human brain. Worse, AVON no longer has his sights set on Lagoon City alone; his goal has become much more devastating… Global subjugation.

As a cloud of hopelessness hovers over Lagoon City, a sliver of hope appears. An ancient power thought to have vanished a long time ago, resurfaces. Now, to save his future, Wale must rediscover its past because everything that has a beginning has an end.

Previous Graphic Novels In The Series

E.X.O. (Vol 4) – Wrath of AVON is the 4th volume in the award-winning series. This Kickstarter contains ALL previous volumes both in PDF and SIGNED physical formats at heavily discounted prices. So take advantage while you can!

Volume 4 will be the LAST E.X.O. book for a while! After this, we’ll be taking a LONG hiatus from the series to focus on developing new characters and stories in the YouNiverse. So this will be your last chance to grab SIGNED copies of ALL the books in this award-winning series!

But don’t be too sad, EXO and Fury may or may not appear in other books in the connected YouNiverse (more on that below)!

One of the main reasons I’m super excited about this Kickstarter is that I get to add my course: Creative Biz Launch as a reward tier. Why?

What if you could take out all the fear, doubt, anxiety and confusion that comes with launching/growing your very own Creative Business (comics, animation, publishing, etc.)?

If that sounds like music to your ears and you want to launch/grow a successful Creative Business in the SELF-PUBLISHING, COMICS, ART, ANIMATION, GAMING, FILM, MUSIC, DESIGN, FASHION or any other creative industry, then you are DEFINITELY in the right place! I created the Creative Biz Launch course just for you!

Our goal at YouNeek Studios is simple. Inspired by African history, culture and mythology, we use comics, graphic novels, animation, and other forms of media to tell extraordinary stories that EVERYONE can relate to!

E.X.O. (and all the other titles in the YouNiverse) is at its core is meant for anyone who desires to be entertained by an amazing, character-driven fantasy story.

Without getting into a lengthy financial rant, simply put, it’s the fastest way to get our books out to fans. One of the most consistent feedback we’ve received to date is people want the graphic novels consistently and more frequently. Your consistent support allows us to do that.

All the money received goes towards printing, creating rewards, and Kickstarter fees. YouNeek Studios pays the artists directly to complete the books BEFORE launching any of our Kickstarters. Check out the chart below for a full breakdown.

At $10,000 everyone at the $25 pledge level and above WILL get an additional FREE SIGNED comic. Iyanu – Child of Wonder!!!

At $10,000 Everyone will get a PDF copy of our FIRST EVER TEAM UP BOOK – The Oloris: Heroes Will Unite!

Overconfident, reckless and impatient; These are some of the words that describe this “hero in the making.” Wale’s genius makes him audacious, which more than often leads him into dangerous situations. However, throughout his journey, his bravery, selflessness and strong will show why his true calling is to be a hero.

Wale was born and raised in Lagoon City, Nigeria, but fled the country after a tragedy involving his father’s work. This changes Wale’s life forever as his incredible love for his father slowly turns to disdain. Years after his father goes missing, Wale is still paying dearly for his mistakes. The biggest one yet being AVON. But his father also left him a gift. The E.X.O. suit. A gift that earned him the title “Herald of Peace” amongst the people.

Zahra is, without a doubt, the anchor that consistently keeps everything together when Wale inevitably blows things up. She’s a brilliant engineer, exceptional martial artist, and a master strategist. And this is all without her Fury Gear, which allows her to move at incredible speeds in short bursts.

As a team, Zahra and Wale should be unstoppable, but their love history constantly complicated things. The two are usually very good at suppressing their issues for the greater good, but this may no longer be the case as Zahra’s dark and secretive past begins to catch up to her.

PryTek initially created the Advanced Viral Omnipotent Nanobot (AVON) as a super-virus capable of crippling the infrastructure of an entire nation in mere hours. However, James D. Peters, CEO of PryTek, decided to take it a step further by placing the AVON program inside an android shell to create a war machine that thinks like a virus.

Shortly after, AVON was mysteriously granted free-will and differed from its original programming. Its first words being “I am here to coerce compliance and reset humanity.”

Everyone is still at a loss as to how exactly Timi (Wale’s younger brother) got his powers. Worse, Timi develops amnesia following a mysterious accident and remembers nothing before AVON abducted him. After AVON injects Timi with his mind-control serum, he becomes the first casualty of AVON’s diabolical plan to construct a hive-mind that controls all the citizens of Lagoon City.

Luckily, blood is thicker than, well… AVON’s serum as Timi slowly starts to recall his past. Will his mind be fully healed before AVON fully converts him? or will he become a deadly weapon to be used against his own brother? Only time will tell.

Little is known about the masked sociopath they call Oniku. However, as time passes, he becomes EXO’s worst adversary and Lagoon city’s greatest nightmare. Describing the government as “Myopic” and threatening to “rebuild the city with fire” it’s evident Oniku’s motivations are way past silly propaganda. His great strength, telekinetic powers, and mental prowess make him unmatched by anyone on any given day. He is the leader of a group of radicals called The CREED, whose sole purpose is the “rebirth by fire” of Lagoon City.

A global leader in technology and innovation, PryTek is more known for dubious experiments that have claimed the lives of innocent citizens in the slums of Lagoon City. Early on, PryTek used their technology to aid humanity, but in recent years and most noticeably after CEO James D. Peters takes over, that has become less of a priority. James’ first charge as CEO was to create a subdivision solely for weapons development. This division would later go on to create AVON.

Born in Lagos, Nigeria, Roye Okupe is an award-winning filmmaker, author, speaker and entrepreneur whose passion for comics and animation led him to found YouNeek Studios in 2012, an avenue that would allow him to pursue his dream of creating a diverse library of superheroes. Under that umbrella, Roye wrote, produced and directed several animated productions including, but not limited to, the award-winning and critically acclaimed Malika – Warrior Queen Animated Short. These productions have allowed Roye to attain many prestigious recognitions, such as being #5 on Ventures Africa’s list of 40 African innovators to watch (2016) as well as being part of NewAfrican Magazines’ 100 most influential Africans two years in a row (2016 & 2017).

With the superhero genre currently at the height of popularity, Roye has made it a goal to create a connected universe of heroes, with origins from locations that are currently neglected and/or ignored. In August 2015, Roye released his debut graphic novel titled: E.X.O. The Legend of Wale Williams Part One, a superhero story set in a futuristic Nigeria. E.X.O. was received with critical acclaim and has since been featured on CNN, Forbes, The New York Times, NBC, The Guardian, ABC7, BBC, The Huffington Post, Mashabe and more! Roye’s sophomore graphic novel: Malika – Warrior Queen was also received with critical acclaim, selling more than 40,000 copies of its chapter one special during Diamond Comic’s Free Comic Book Day (2017). Both books have gone on to win several awards, including multiple Glyph Comic Awards and Comic Fist Awards.

EXO’s world is just one corner of the comic book universe created by Roye Okupe. The behemoth that is the YouNeek Youniverse. A world filled with stories (fantasy, sci-fi, steampunk, historical fiction, etc.) that feature compelling heroes and villains. All of whom have their roots in and are inspired by, African history, culture, and mythology. With a world so vast, there is unlimited potential for sequels, prequels, spin-offs, and crossover stories.

Check out the current reading guide below. As you can see, we’ve got a large YouNiverse of stories. And while you don’t need to read any previous books to enjoy the E.X.O. series, we have several reward tiers that allow you to grab some of the other books in the YouNiverse.

Having run 6 successful Kickstarter (and delivering all rewards to all backers) before, I am fully confident and also very well prepared to run this Kickstarter smoothly. However, should any issues arise, I plan on handling them in a professional manner. I will also be sending frequent messages via the Kickstarter updates thread to keep everyone informed on progress. I believe in 100% transparency and you guys deserve nothing less.