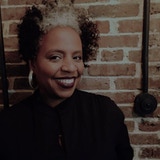 As Of A Now
As Of A Now (AOAN) is an “x-ray” film projection installation which is 3-D mapped onto a vacant rowhouse, using audio-visual narratives, augmented reality, and artifacts that reference its former Black denizens.

How can stories that are attached to objects and now vacant buildings live beyond the loss of their material vessels? AOAN counters these attempted physical erasures and explores both immutable Black culture and the impermanence of its physical manifestations. I am moving augmented “atoms” from then to now. From canvas to film. What happens when the canvas (a building, neighborhood or people) is gone? AOAN is the connective immersion, leveraging people in place with story and history.

AOAN completed production in March of 2018 and launched its scaled version at Light City. It projected a three-dimensional mapping onto a scale model of the West Baltimore building that it is depicting.  It’s now time to bring it home to its North Avenue site and the community that inspired it!

As Of A Now was made thanks to the generosity of: The Saul Zaentz Innovation Fund in Film and Media at Johns Hopkins University; Light City Festival /BOPA; Robert W. Deutsch Foundation; The Aaron and Lillie Straus Foundation; The Ruby Award Artist Project Grants, a program of the Greater Baltimore Cultural Alliance; and T. Rowe Price Foundation

Imagine a cross-sectioned view projected onto a vacant building façade depicting vernacular life, movements, and the ways people conduct familiar rituals such as family care, gathering, grooming, mourning, conflict, and celebration. These voyeuristic vignettes are designed to humanize spaces that are otherwise considered blighted and void of life. The quotidian and meditative images inspire the public to re-imagine their meaning and give voice to the remaining communal memories that are familiar and sacred and celebrate their evolution over time. These are stories of fugitivity and introspection, of familial exchange, and private withholdings. The film challenges the notion, in the face of gentrification, that urban buildings are neutral commodified spaces. It proposes, rather, that they are sites of memory which are imbued with cultural potency and residue. It poses the question, “How can stories that are attached to objects and now vacant buildings live beyond the loss of their material vessels?” AOAN counters these attempted physical erasures and explores both immutable Black culture and the impermanence of its physical manifestations. I am moving augmented “atoms” from then to now. From canvas to film. What happens when the canvas (a building, neighborhood or people) is gone? AOAN is the connective immersion, leveraging people in place with story and history.

The main character is a boy/spirit who is unable to commit to any of his living families. In each story, the boy is a harbinger for disruption of the banality. An Abiku in Yoruba mythology refers to a child who dies and returns repeatedly. It means ‘predestined to death’. His presence is a metaphor for the instability of Black urban life despite our constant quest for equilibrium. He makes us question our alien/outlawness and our inability to enjoy routine or assimilation. Are we capable of co-existence at the site of our traumas? How do we feed our ancestors and maintain our collective sanity?

The impact of Baltimore’s much-maligned history on contemporary culture is emblematic of urban Black America. It is fodder for white-paper studies, song lyrics, and political shaming. However, its lesser-discussed history of self-determined unapologetic residents, who were/are subjected to redlining and race covenants, is ripe for visual storytelling. The city’s geography uncovers a sordid exclusionary world in the context of ascendancy and resilience. AOAN is presented as a participatory view into our shared stories about urban pursuits, disruption, and place.

I am an artist and cultural producer.

I hope the specificity of my work, and work that I produce with other creators, give voice to stories and images that aren’t often represented widely, at least not very persuasively.  I hope I am shifting the lens a bit by calling out details and a perspective that informs me.  I am interested in ritual, subliminal gestures, the raw mundane visual narrative.  As Amiri Baraka puts it –    “Not the Special Occasion (as Smokey Robinson sings of) but the day to day always a continuous exercise of astonishing grace”.

In exploring the poetics of quotidian Black life, the regularity, ubiquity, and simplicity, I attempt to uncover dialectics of quiet domesticity. For me, this domesticity involves, humor, love, strife, care, and highlights the familiar.  This is what I would offer as a refusal of subjugation and the outside gaze.

TNEG, a film studio with my partners Arthur Jafa and Malik Sayeed, is a motion picture studio whose goal is to create a Black cinema as culturally, socially, and economically central to the 21st century as was Black music to the 20th century

I dwell in both immutable Black culture and the impermanence of its physical manifestations.  The aesthetic and narrative choices I am making hinge on things that may be generally imperceptible.  I am trying to grasp it myself then hopefully offer a tangible vibration I can somehow make knowable.

Elissa Blount Moorhead is an artist and producer exploring the poetics of quotidian Black life, to emphasize gestural dialectics of quiet domesticity and community building.  The artist dwells in both immutable Black culture and the impermanence of its physical manifestations. Moorhead has created public art, exhibitions, and cultural programs for the last 25 years. She is currently a principal partner at TNEG film studios, with Arthur Jafa and Malik Sayeed. TNEG asserts that a cinema calibrated to the cultural, socioeconomic, and Elisexistential particulars of Black being is not only possible but inescapably the way forward toward a viable Black cinema.

Moorhead co-founded Red Clay Arts in NYC. She has co-produced and curated over 20 exhibitions and multimedia projects including Random Occurrences; Cat Calls (Street Harassment project); Practicum; FunkGodJazzMedicine; and Art in Odd Places.  She was awarded the USA Artist Fellowship, Saul Zaentz Innovation Fellowship, Ford Foundation /Just Films/Rockwood Fellowship and Ruby Award.  She is currently producing a documentary film on Gil Scott-Heron and a projection installation called As Of A Now.  She is the author of P is for Pussy, an illustrated “children’s” book and is featured in the new anthology How We Fight White Supremacy: A Field Guide to Black Resistance due out in March 2019.

Please see link below for full list of credits. Thank you to the AOAN Team that helped make this happen.

This is an INDIGO IMPACT sponsored project.

Baltimore Brew:  “AS OF A NOW” shows Baltimore rowhouses not vacant, but full of generations of “quiet stories”

“Film, debuting at Light City, honors the cultural memory of the city’s black residents amid demolition and development”.

Light City. A festival of light, music, and innovation.

AOAN film installation installation has already been successful in 1/2 scale- what we want it to take it to the next level of having it projected full scale with Augmented Reality features for all of Baltimore, and the world to see.