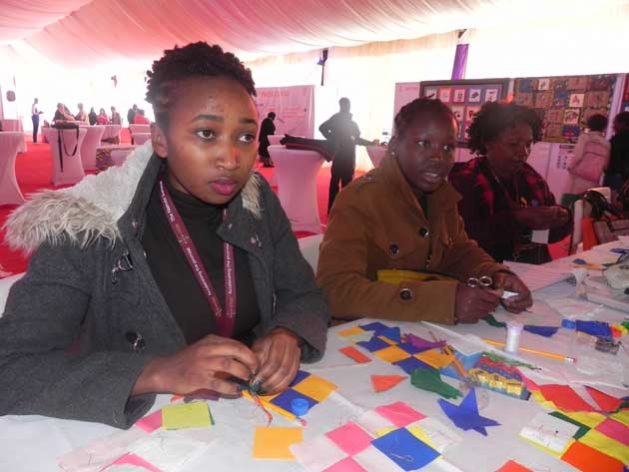 Ann Kihii (25) spends time with other young women from poor communities in Nairobi and use embroidery to create images that tell a story about the daily challenges they face. They also get a chance to discuss the issues among themselves in a safe space. Credit: Mantoe Phakathi / IPS

NAIROBI, Kenya, Nov 14 2019 (IPS) – While women find it hard to talk about their painful experiences, some have found a way of expressing themselves through art. Women, trained as artists, from Nairobi’s informal settlements Kibera and Kangemi, have produced a beautiful quilt that tells stories about their daily challenges.

Displayed at the Pamoja Zone of ICPD25, the quilt is used to lobby delegates to rally behind girls and women by ensuring that they enjoy sexual reproductive rights and end gender-based violence.

Being able to express yourself through art

While the embroidered quilt is a beautiful piece of work, each square that forms part of it it is sewn by different women who are expressing their sad experiences.

“I live in a community where violence against women is the order of the day,” she told IPS. “Unfortunately, women find it hard to talk about it.” Ann Kihiis (25) is one of the young women who have turned out to be a fine quilt maker. Using small square pieces of fabric, she sewed an image of a woman who was experiencing violence in her marriage.

In the same image, there is a shadow which she says symbolises the anger and hurt that an abused woman carries with her all the time unless she is able to talk about it and heal from the experience. Although she has never been in an abusive relationship, she said observing it from a young age in her family and community has traumatised her. 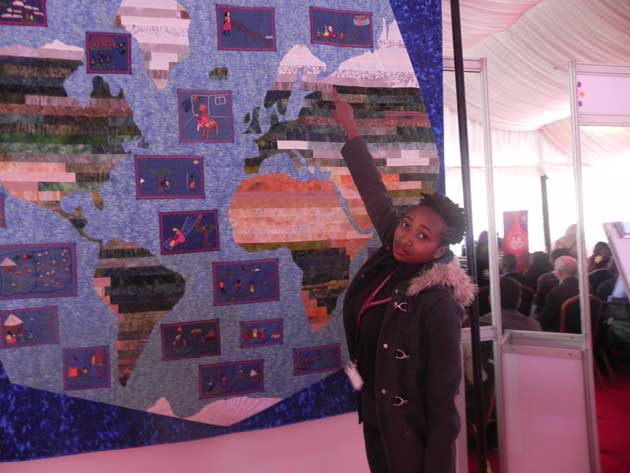 Ann Kihii showcases the quilt that she contributed in making where she designed an image of a woman in an abusive relationship who always carries the anger and hurt. Credit: Mantoe Phakathi / IPS

“I love art and this is a way of creating awareness about gender-based violence and letting people know that it’s okay to talk about it,” said Kihiis.

She said she is aware that women who are abused end up believing that they do not deserve to be loved, something that is not true.

On the same quilt, other artists made images depicting crime, drugs and teenage pregnancy. For example, there is an image of a young girl who is sitting on a desk with a baby on her back. This, according to Bobbi Fitzsimmons, a quilter from the Advocacy Project is the story of a young girl who was abandoned by her father after falling pregnant. When she fell pregnant for the second time, she decided to take control of her life and returned to school even if it meant studying with much younger learners. Bobbi Fitzsimmons, a quilter from The Advocacy Project, trains women groups across the world to express the challenges they face by using embroidery, painting and applique to raising awareness so as to get support in addressing gender-based violence and sexual reproductive health rights. Credit: Mantoe Phakathi / IPS

“Art is a very effective way of expressing oneself,” she said. “What’s more, the women came together while working on the quilt and discussed their issues, in what was a safe space for them to talk.”

The Kenyan women artists are trained by the Kenya Quilt Guild under Fitzsimmons’ directorship.

The United National Population Fund (UNFPA) funded The Advocacy Project to train the women. They also funded the exhibition of quilts from women in other parts of the world. For example, there is a quilt from Nepal on display with squares of paintings through which a group of women from the Eastern part of the country expresses themselves after they were treated for uterine prolapse, a painful condition affecting 600 000 women in Nepal. Another quilt donning the walls of the Pamoja Zone is one from survivors of sexual violence from the Democratic Republic of Congo, while another depicts child marriages in Zimbabwe.

In total, 18 quilts are on display at the exhibition, where delegates are fascinated by the stories. 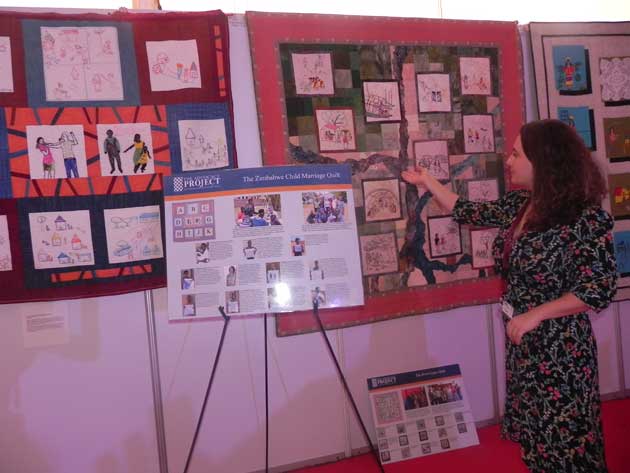 Karen Delaney, the deputy director of The Advocacy Project believes that through this initiative, women do not only come together to talk about their issues but they also get a lifetime skill for income generation. Credit: Mantoe Phakathi / IPS

In making the quilts the artists are trained to use the following skills: beadwork, painting and applique.

“Apart from the opportunity of bringing together the women, they gain skills that they can use to generate income for the rest of their lives,” said Karen Delaney, the deputy director at The Advocacy Project.