Moon and Sun: Rumi's Rubaiyat An authentic new translation of Rumi in a bilingual English-Persian edition 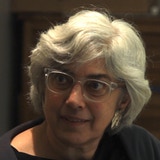 Twenty years ago, I began translating one of Rumi’s quatrains every day, as a way of exploring the Sufi mystic’s poetry more deeply than popular American versions of Rumi allowed. I dove heart first into his poems of ecstatic love, spiritual longing, and the most profound of human friendships.

The poems were published daily—both Rumi’s original and my translation—in an online magazine that was the first home of the Iranian American community on the Internet at the beginning of social media. Readers offered critique and encouragement, and I learned from this community of connoisseurs.

That daily practice evolved over years of careful editing into what is now ready to become a beautiful book. The original Persian verses, included with the English, are a special bonus for bilingual readers and students of Persian. Even for those who cannot read the language, they open a door through the beauty of the Persian script and remind us of where these poems came from. The book design is a collaborative effort that brings together expertise in the book arts of both cultures.

Praise for Moon and Sun…

No ancient poet has a more modern sensibility than Molana Jalaluddin Rumi, but capturing this sensibility in modern English has proved to be a formidable challenge. The striking translations that have made Rumi the most popular poet in 21st century America have often succeeded by glossing over the inherent complexity of his thought. No such compromise is made by Zara Houshmand in her brilliant translations of Rumi’s ruba’iyat (quatrains). In Moon and Sun, she has found a flawless idiom that is completely modern, yet captures the timeless quality of Rumi’s poetry to perfection. By avoiding the strictures of rhyme and meter but retaining the poetic essence of the original, Houshmand’s translations take the reader to the very core Rumi’s mystical world – a journey made easier by her masterful selection and organization of the quatrains into chapters that virtually provide a map of the poet’s states of mind. Moon and Sun will, no doubt, immediately become an essential part of the Rumi canon for our time.  – Ali Minai, 3 Quarks Daily

Zara Houshmand’s fresh and approachable translation of Molana’s quatrains are a welcome addition to translations of his poetry into English. She reflects the diverse spiritual word from which he emerged, lending her own poet’s heart and mind to this nuanced and careful translation which accords Rumi his place as one of the giants in world poetry.  – Persis M. Karim, Neda Nobari Distinguished Chair, Center for Iranian Diaspora Studies, San Francisco State University

Moon and Sun is almost ready to go to print. The editorial work and design are complete. We are in the process of finalizing corrections to the galleys. Your support for this Kickstarter campaign will cover the costs of printing and shipping a hardcover book of 220 pages, including 256 poems in both languages. We will also produce an ebook that mirrors the design of the printed book.

If we meet our goal, we will place the print order within days of the campaign’s completion. The books should be in your hands in March 2020.

Zara Houshmand is an Iranian American writer and literary translator with long experience in publishing, and in bringing creative projects successfully into the world. Her translations of Bijan Mofid’s plays were awarded the first National Theatre Translation Fund grant. She was a contributing editor for Words Without Borders, the international journal of literature in translation, and their first anthology, Literature from the Axis of Evil (The New Press, 2006). As executive producer at Worlds, Inc. she was involved in the pioneering development of virtual reality on the Internet, and as editor for the Mind & Life Institute she was responsible for nine books on the dialogues between the Dalai Lama and Western scientists. Her own poetry is widely published in journals and anthologies, and her collaborative writing includes A Mirror Garden, with Monir Farmanfarmaian (Knopf, 2007) and the forthcoming Running Toward Mystery, with the Venerable Tenzin Priyadarshi (Random House, 2020). More at zarahoushmand.com.

Kathleen Burch has had a decades-long career immersed in literature as a typographer, book designer, publisher, curator, and book arts educator. She creates books, artists books, and letterpress-printed poetry broadsides with finely tuned typography and design—all with the object of engaging the reader to fully enter into the heart and spirit of the writer. She founded a type & design studio in 1979 now called Burch Typografica which continues to this day. Cognizant of the value of organization in the large book arts community, in 1996 Burch co-founded, with Mary Austin, the San Francisco Center for the Book, which offers education in letterpress printing, hand bookbinding, and lettering as well as exhibitions of the art of the book. There, she curated and designed the playing card exhibition Reading the Cards in 2001; in 2014 she co-curated, with John McBride, the Pacific Center for the Book Arts Members Show of 120 works for the San Francisco Public Library. Her graphical & design work from the eighties was the subject of a retrospective exhibition at Mills College in 1996 which featured her principal artists book, Indicia: a romance, a two-deck study of the history of the design of playing cards and three thousand years of literary romances. She was an artist-in-residence at Oxbow School in 2006 and at Xerox PARC in 2000. As president of The Book Club of California, 2009-2010, she designed several major keepsakes, including their Centennial programs of 2012, and on M.F. K. Fisher in 2008.

Mansour Taeed came to the US from Iran in 1973 at the age of 16. He studied physics at the University of California, Berkeley. After completing his Master’s degree, he went to Columbia University, where he realized that he did not need a PhD in physics to do theater and film. He is a founder of two theater companies in the Bay Area, Darvag and Javaneh, and has been involved in more than 40 plays, films, and TV programs as an actor, director, producer or writer. In 2008/9 his successful one-man play Ma Jasoos Neesteem (We Are Not Spies), a comedy about growing up as a Baha’i in Iran, toured the US, Canada, Europe and Australia. His most recent work is a comedy based on Woody Allen’s short play Death Knocks, called Death Enters. For 20 years, Mansour also ran the successful company Best Printing in Berkeley, offering specialized services in Persian typography, printing many books in Persian and English, and supporting the Iranian American community’s cultural activities in the Bay Area.

We recognize that nothing in this world is guaranteed, and the unpredictable happens, including trade wars, international sanctions, and paper shortages. So we have been extra careful. We have brought the project almost to completion, with the editorial and design work finished, before asking for community support. Only the final steps of correcting proofs, printing, and shipping remain, and we have budgeted conservatively for those.

Should any unforeseen problems arise we will be fully transparent in communicating delays, but based on thorough research and long experience, we are confident that we can deliver in a timely manner.