The book of 2000s Turning a collection of pictures of things and places called 2000s into a beautiful book. And a collaborative hunt for the last 2000s! 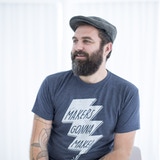 I like the story they tell: of a time before the Internet, before social networks, before big brand shops invaded our cities. When not every company needed to be ‘special’. When the year 2000 still meant flying cars and robot servants…

Also, they usually have a DIY graphic vibe that I really like.

A lot of them have already disappeared, and 20 years after the year 2000, I count on you to help collect the last ones before they’re gone…

The main aim of the campaign is to fund the production of a book that compiles the best 2000s from my collection: THE BOOK OF 2000s!

The book will have around 120 pages, with nearly 200 photos (depending on your contributions). The cover will be printed on FSC certified paper and interior pages on recycled paper. Its 6×9’ softcover will make it easy to flip through and get lost in the land of 2000s. As I am a designer, you can be certain I’ll put a special attention towards the composition of each double page.

Here are some examples of pages you’ll find in the book:

Obviously, the main reward is the book of 2000s. But there are a few different rewards so that everyone can support the project in their own way.

I’ve also added the possibility for you to have the logo of your choice drawn with ‘2000 style’ (you give me a name, I add 2000 after and turn it into an awesome logo).

Pick the reward that works for you in the ‘rewards’ column on the right.

The campaign is a great time to build momentum around 2000s and help collect more 2000s from all over the world. So I’ve started a map of 2000s that I don’t have yet. And I’m turning to YOU, the backers, for help!

The more 2000s you help collect, the coolest the book will get. Oh, and if you send me a 2000, your name will be in bold in the book (I know, right!). So click on the map and check which ones are easy to get around where you live.

Please use the comments / messages if you have any questions. Thank you very much for joining the hunt! Use the hashtag #hunting2000s on social networks.

If you want to join the hunt but don’t know where to start, I’ve compiled a map with some 2000s that I haven’t managed to snap yet…

To make the hunt more fun, I’ve added some missions. They don’t have to be found in order. So can you find 4 restaurants 2000? 0r send pictures from 5 different countries?

For each successful mission, the book will get a bit better (see Extras below).

Obviously, the missions are collaborative! I’m not expecting you to fly all over the world to find 2000s in 5 different languages. Find one and let the other backers find the rest!

(Of course, you can send me pictures of 2000s that are not linked to any missions!)

It’s my first Kickstarter, but as a designer, I’ve had some experience with publishing before. The book is about 90% ready. It might change according to how much backers decide to contribute, but integrating new images is easy. I have secured a local printer and have a quote validated.

I have left my previous job and have time dedicated to the project in the coming months.