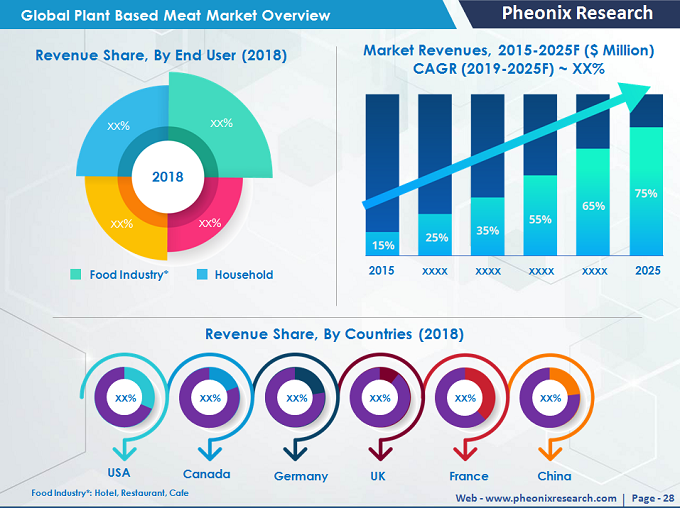 As the budding plant-based meat (Meat Substitute) drivers are enhancing awareness of consumers regarding adulteration of the meat and its ill effects on health, the demand for plant-based meat products is increasing day by day. This is the reason most of the consumers are shifting towards an organic or vegetarian diet rich in protein. Thus, it is increasing the opportunity for the growth of the global plant-based meat market. Increasing awareness about plant-based meat products as a good source of protein at an affordable price also enhancing the growth of the global plant-based protein market as well. Most of the plant-based meat manufacturers have started capitalizing on research and development heavily with mergers & acquisitions for the innovation of the product. This is a major element in enhancing the plant-based meat market growth. In 2017, the “Beyond Meat” product was introduced by “Tyson” as the demand for protein-rich vegetarian diet was increasing. “Beyond meat” is considered as the substitute for meat in the roll-out plant-based meat burgers. Also, Maple Leaf Foods introduced vegan sausages, tempeh, and burgers so that their customers can be increased. Sweet Earth Foods was acquired by Nestle for the expansion of the product portfolio of Nestle by including vegetarian meals and snacks.

There are three subdivisions of plant-based meat products based on the source. These three subdivisions include soy-based, gluten-based, and mycoprotein. In 2017, it has been observed that soy-based and gluten-based products have largely contributed to market share as these products are very popular among customers. Mushroom, Tofu, Quorn, Tempeh, Seitan, and many more are different market categories of plant-based meat products based on its type. Tofu is rich in calcium and protein. Thus, it is a highly preferred alternative for meat by most people. This plant-based meat product is made up of soybean and considered as a staple food in the Asia Pacific. Based on end-use, this market is divided into two departments food industry and households. This plant-based meat market is sub-categorized into modern, convenience, E-retailers, specialty, food stores, and many more based on distribution. As these products are easily accessible in modern and specialty stores, many consumers preferred these products over others. With the increase in internet browsing these days, E-retailers also anticipated contributing to the market share.

Global plant-based meat is segmented as below:
By Source
• Gluten based
• Soy based
• Mycoprotein

Key Highlights of Report:
• Company profiling with major information about the key players operating in global potato plant-based meat market
• Estimation of market size in terms of value and volume
• Assessment of global plant-based meat trends for the period 2016-2026
• Historical (past) information for 2016 & 2017 and projections with CAGRs from 2018 to 2026 considering 2017 as base year for the market
• Overview of the global plant-based meat value chain
• Market drivers, restraints, future prospects and competitive analysis (market positioning) of key market players