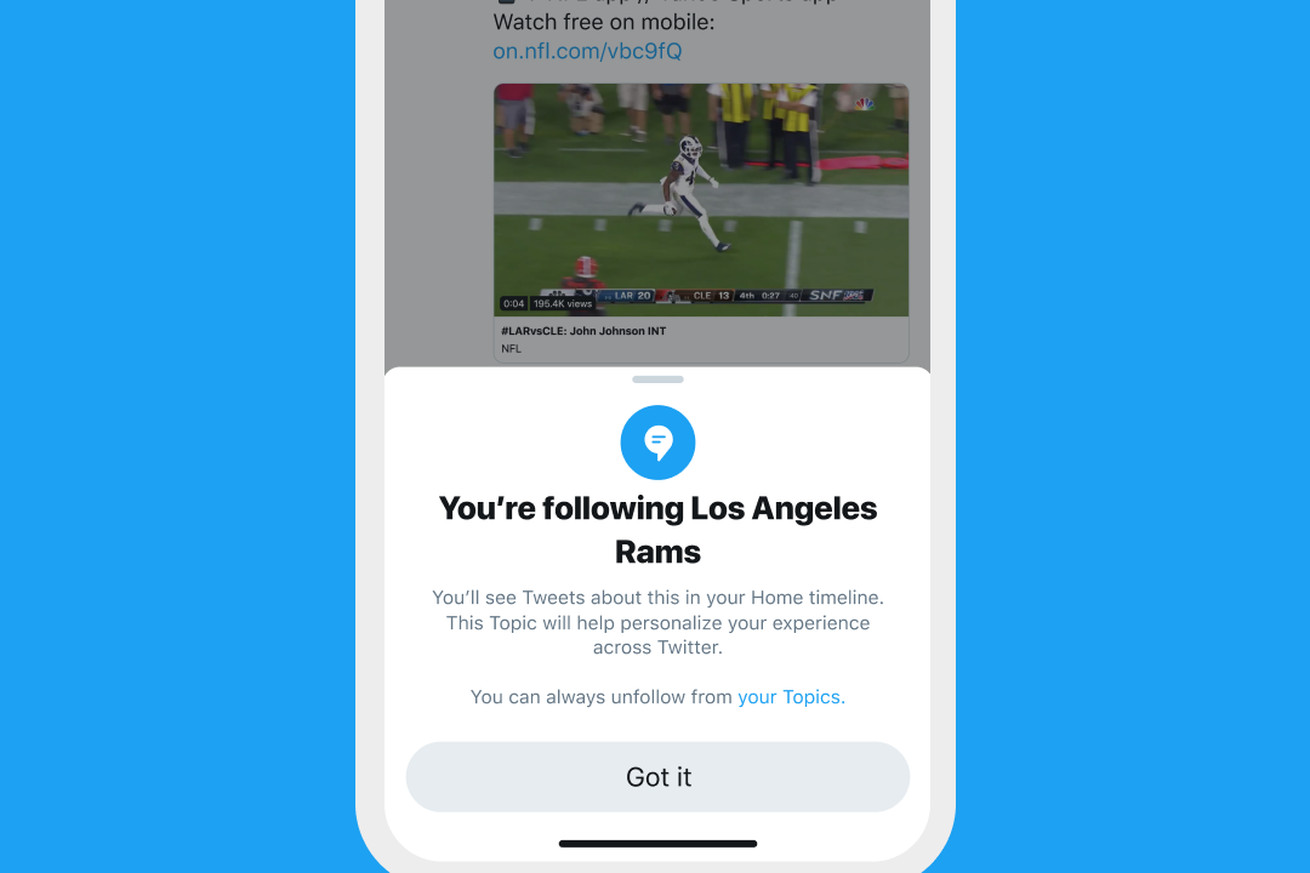 Recently, a friend told me he wanted to spend more time using Twitter, but he didn’t quite know how. His primary interest is comedy, he told me, and he hoped to find a way to see comedians’ best jokes on Twitter as they were posted. But when he followed comedians, he mostly saw a lot of self-promotion — tour dates, late-night appearances, and that sort of thing. No matter your personal interests, there are countless good and relevant tweets on Twitter. But where are they?

Topics, a new feature from Twitter that is starting to roll out this week, represents a significant effort to answer that question. You will be able to follow more than 300 “topics” across sports, entertainment, and gaming, just as you are currently able to follow individual accounts. In return, you’ll see tweets from accounts that you don’t follow that have credibility on these subjects.

Twitter executives hope that Topics will make the platform more approachable for new and intermittent users and make it easier for heavier users to discover new accounts and conversations. The feature, which began testing on Android in August, is set to roll out globally on November 13th.

“We know that the main reason that people come to Twitter is to keep up on the things that they’re interested in,” said Rob Bishop who leads Topics team. “The challenge is it’s really quite difficult to do that on Twitter day to day.”

The idea of letting people follow topics in addition to (or instead of) individual accounts dates back to the earliest days of the company. But it took the development of machine learning tools and the hiring of a human editorial team, among other things, to make it happen.

As a journalist who spends eight or so hours a day paying at least glancing attention to the Twitter timeline, I’m a somewhat poor test case for the value of Topics. I follow people whose work is relevant to my own and very few others. Generally speaking, if it matters to the companies I cover, I don’t miss it.

“The main reason that people come to Twitter is to keep up on the things that they’re interested in.”

But I’m also a pro wrestling nerd who recently started an alternate account to keep up with wrestling Twitter. (I had found that tweets about SummerSlam were underperforming on my main account. If you can imagine!) The minute I created my new account, I was in the same spot as my comedy-loving friend: knowing there were lots of good tweets out there for me but not at all clear on where to look.

I did the obvious things: following the big pro wrestling federations, the top stars, and a handful of wrestling journalists and podcasters. But when Twitter enabled Topics for my account, I could also just follow “WWE.” Suddenly, a new icon appeared as I scrolled, indicating that the tweet I was reading had come from a topic I was following.

During a recent visit to the Twitter office, Bishop walked me through how tweets in a topic like WWE get selected for the timeline. First, Twitter scans incoming tweets for keywords like “WWE,” “pro wrestling,” and so on. (It can’t search for those terms in images and videos, at least not yet.) Second, Twitter searches to see if the tweet is from someone who normally tweets about that topic as a measure of credibility. Finally, Twitter looks at engagement: how many other people who care about this topic liked, retweeted, or replied to a tweet? The more people are interacting with the tweet, the more likely it is to make the cut.

The first and most obvious challenge here comes in picking the right tweets to include in the timeline. In my experience, Twitter’s algorithms tended to be a little obvious. Many of the first tweets I saw came from official WWE accounts and the accounts of their wrestlers. Some of that is fine, of course, but a lot of those high-engagement tweets are just naked self-promotion and aren’t particularly valuable to me. (I already know what time the pay-per-view starts on Sunday, thank you.)

After a few days of testing, though, I started seeing more relevant tweets. I learned that WWE had renewed its morally bankrupt deal with the Saudi Arabian government, thanks to a Topics tweet inserted into my timeline from a journalist I hadn’t been following. Another Topics tweet came on the same subject from an ordinary wrestling fan who offered some spicy, relevant commentary. It was everything I hoped Topics would be.

The second challenge in perfecting Topics comes in balance: how many Topics tweets should Twitter show you? Bishop told me that, as a general rule, the fewer individual accounts you follow, the more Topics tweets you are likely to see. That seems like a reasonable approach. I follow fewer than 100 people on my wrestling alt account, and many of the tweets in my timeline are just tweets that the people I follow have liked. Tweets from Topics have so far been at least as good as those, and they’re often better.

Still, a vocal subset of Twitter users is extremely picky about which tweets appear in their timeline. (When other people’s likes started appearing in the feed, seemingly at random, my own timeline filled up with the howls of aggrieved users.) Twitter executives hope that Topics is widely used, but I wouldn’t be surprised if power users decide it isn’t for them.

One topic you won’t find included in the initial batch: politics. The company tells me it’s sensitive to the potential unintended consequences of its algorithms offering additional amplification to tweets about sensitive subjects, and so it’s sticking to lighter fare to start.

Bishop says the feature will shine for followers of big fandoms, such as major professional sports teams or the Korean boy band BTS. The group and its members represent one of the most discussed subjects on all of Twitter, he said, and yet, there are few official accounts on which to follow daily developments. (Get well soon, Jungkook!) That left fans searching for fan accounts, even though Twitter has a good idea of what the top accounts are. Now, fans can just follow the BTS topic, and Twitter will surface popular tweets about the band.

If Topics succeeds, Bishop said, the average person won’t follow fewer individual accounts. In fact, he said, they will likely follow more. It also means that your tweets about many popular subjects may now travel further than ever before, which can be a mixed blessing, as anyone who has ever seen a tweet go viral and faced harassment as a result can testify.

So what’s next? More topics, including on subjects that are popular internationally, Bishop said. The team is also working on a feature to mute topics, which could be useful for anyone who is trying to avoid spoilers for a popular television show, for example. Eventually, Bishop says, you may be able to “narrow cast” your tweet to followers of a particular subject, which is another ancient dream of Twitter users. (Imagine being able to discuss the city you live in on Twitter but only with people who are following that subject.)

The team is also working on a feature to mute topics

The company also plans to eventually let you browse topics on an explore page and to view topics on a dedicated list. (This is something that, coupled with narrow casting, could let me do all of my tweeting from a single account.)

Like some other features Twitter has released this year — the ability to search your direct messages comes to mind — Topics is a feature that feels obvious, welcome, overdue, and not quite finished. But it also feels like meaningful progress for a company that has never known what to do with the bounty of incredible tweets flowing through its servers each day.

“As with any machine learning problem, we learn the most from putting this in customers’ hands, and seeing what they engage with so we can build better models,” Bishop said. “Our goal is to get this out as quickly as possible and get people using it so we can improve our algorithms.”