Afterparty is a hilarious exploration of the afterlife and binge drinking 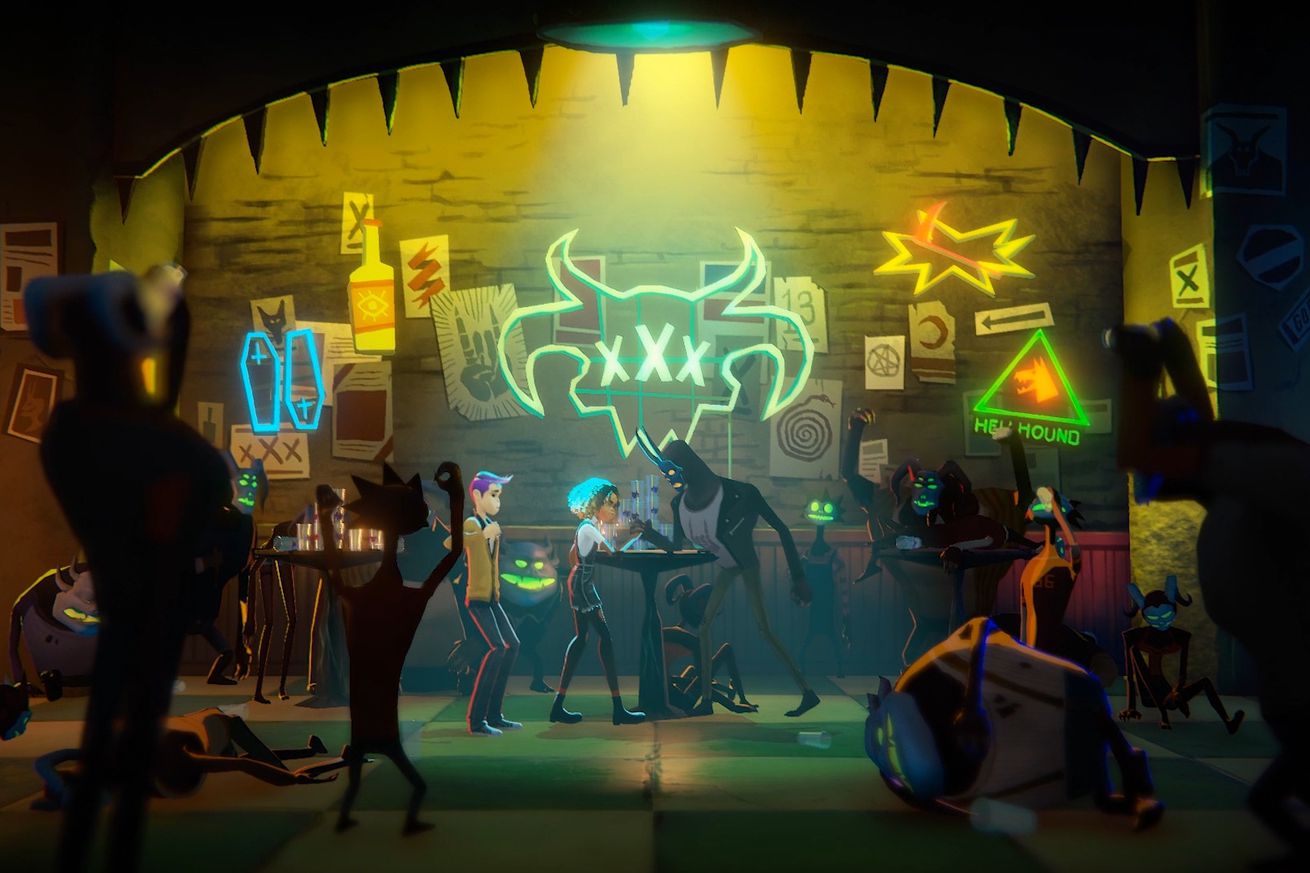 Throughout Afterparty, there’s an ongoing mystery around the game’s pair of leads. They’ve died, but why have they gone to Hell? Surrounded by serial killers, bigoted robbers, and people who insisted on using only the express checkout lanes in grocery stores, the answer could be anything. Or perhaps, as Satan suggests, it’s far simpler: What did you do to deserve anything else?

Moral fiber and the overarching question of “how good is good enough?” are having a moment in pop culture. While a show like The Good Place is not the first to examine the afterlife, it does so with a thoroughly modern tone that acts as a mirror for being a good person in our complicated times. Afterparty, developer Night School Studio’s latest game, exists in that same vein. It taps into a more playful idea of hell, where evil exists on the spectrum you set.

At the outset of the game, childhood friends Lola and Milo are ready to be processed for punishment. In this version of the afterlife, torture, like its cousin the office job, takes place between 9-5. In the off hours, demons and humans alike hit the bars to drink away their stress and sorrows. On their first night in the underworld, however, Lola and Milo learn that Hell comes with a loophole: outdrink the devil, and you can return to your life on Earth. In order for him to accept their challenge, however, they first have to take on the realm’s monarchs — fallen angels like Lucifer himself.

Much like spooky teen thriller Oxenfree, Night School’s debut title, Afterparty plays out as a narrative-heavy game that unfolds through dialogue choices and light puzzles. Its boozy, neon-drenched world is backlit by Twitter parody Bicker, which updates with thoughts from the locals (“really wish they would do something about the lack of nazis on here”). But the real meat is the story and the near-constant talking, whether it’s quick banter between the two friends, overheard tidbits, or choice-driven conversations that push the story forward. It lives or dies by its wit. That’s a risky choice that requires strong writing and real acting talent to succeed.

Afterparty has that covered. Lola and Milo are thoroughly millennial characters, full of biting observations. Paired together, they are the game’s constant shot and chaser. Janina Gavankar is stellar as the cynical and dry witted Lola, while Khoi Dao’s wavering lilt perfectly encapsulates a bumbling ne’er-do-well in Milo. Dave Fennoy, who voiced protagonist Lee Everett in Telltale’s The Walking Dead, brings an irresistible charisma to a more lighthearted and fun Satan.

In between chatting with Hell’s denizens, players will switch off between Lola and Milo, while on and taxiing between different islands to drink. A lot. The game offers dozens of different cocktails to try, which empower the player with new dialogue options depending on the mix. Some will offer your standard “liquid courage,” allowing you to be more assertive. Others may give you the chance to talk like a pirate and crack jokes in an old-timey “vaudeville” accent, or flirt. A personal favorite of mine, “Literally Acid,” turns your character into a club kid who wants to talk about vibes, bro. With each sip of a drink, the screen becomes unfocused and whirly as your character gets more and more blasted. That makes things tricky when you play drinking games like beer pong. But that’s sort of the point.

Afterparty is not without its caveats. Though fun, the rotating booze choices don’t have much impact on your ability to succeed — it doesn’t matter whether you’re direct or acting like a drunk pirate, you’ll still manage to achieve your goals. The same can be said with the game’s puzzles, which are less about logic and more about just showing up. Occasionally conversations bump into each other, or fall out completely depending on your timing, leaving you to wander silently.

Throughout this all, Afterparty weaves together its bigger questions about relationships, growing up, and what it means to be a good person through its sharp-tongued humor. It’s a darkly funny game whose laughs benefit from its choice of setting. Satan and his horde of miscreants are colorful and bewitching; they come across like degenerate party friends who manage to effortlessly bring out the worst in you. Despite having two lovable leads, Afterparty never fails to remind you that Lola and Milo are still kind of assholes whose actions on Earth earned them a spot in Hell. It’s funny to tell a demon to go fuck itself; it’s also exactly the kind of behavior that would knock points off your karmic score.

The game continually tugs an interesting thread on perspective, and whose matters more. Your choices will inevitably grant you more agency and control as either Lola or Milo, which the game confronts directly by way of who you play. Through dialogue options, it’s also possible to paint Lola and Milo’s friendship as toxic codependency. Their dunks on each other and passive aggressive jabs are almost good enough to be considered afterlife torture, instead of paths that portray them as two childhood friends who even Hell couldn’t tear apart.

And the moral implications of many of the game’s choices? Not always clear. Is it better to help a human in hell, or a demon working a job? Should you save a man who could be innocent, or trust a monarch and throw a trial? There are no right or wrong answers. What might be following your gut instinct could just as easily be justification for your own bad behavior.

That’s the dilemma we face each and every day, in every part of our lives. But rather than revel in existential dread, Night School has found a way to make comedy of the absolute horror of being a person. Through death, Afterparty has far more to say about life.