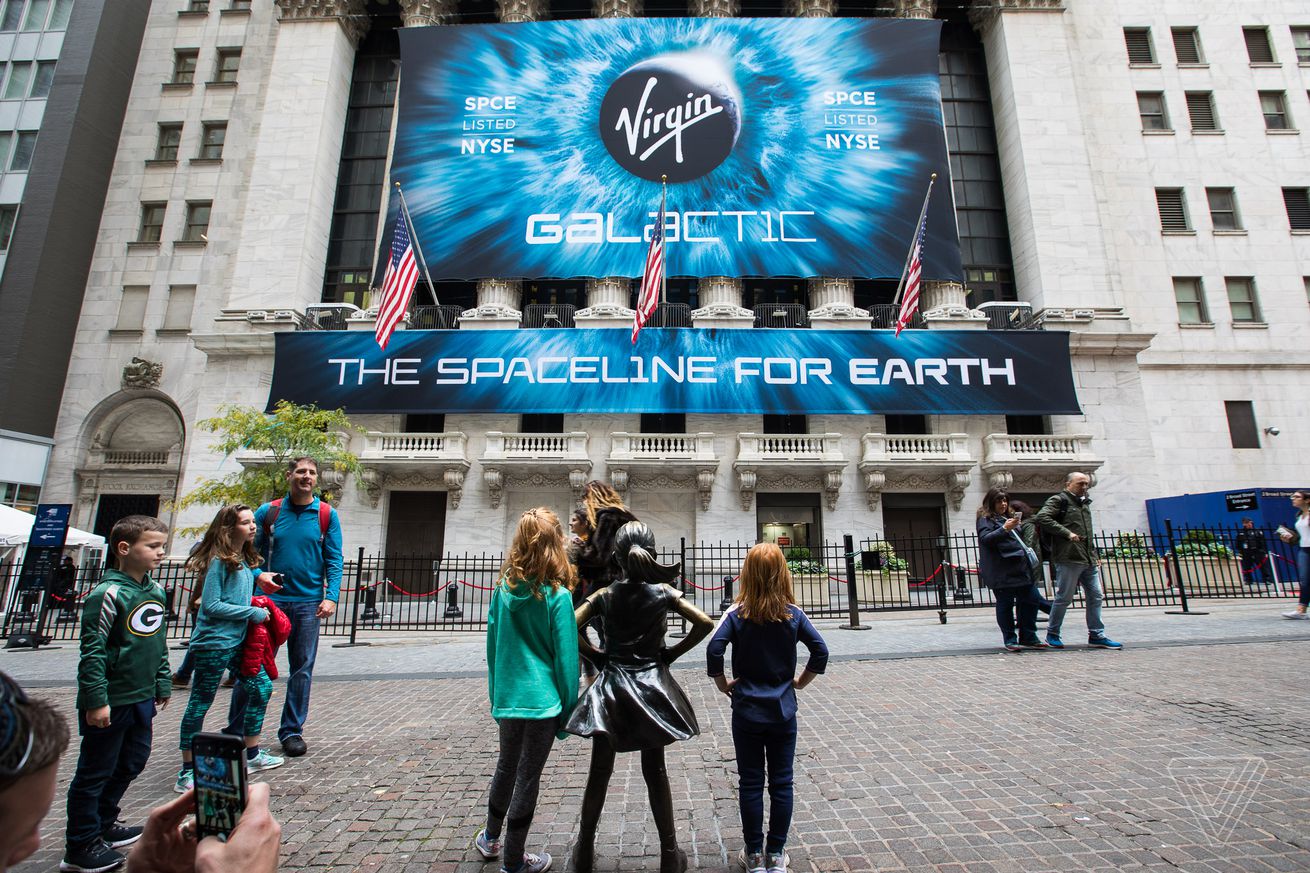 Space tourism venture Virgin Galactic is now a publicly traded company, thanks to a reverse merger. The company’s billionaire founder, Richard Branson, was on hand at the New York Stock Exchange Monday morning to celebrate the public offering, along with firework shows and a giant banner of his eye adorning the outside of the building.

For its first day of trading, the company’s stock — under the ticker SPCE — was on the rise for a good part of the morning. Shares opened at $12.34, but ultimately closed at $11.75 — a .3 percent decrease.

The question now is if public investors will put their money into a company focused on sending tourists to space, where they’ll experience a few minutes of weightlessness. Virgin Galactic’s premiere vehicle is a spaceplane called VSS Unity, which carries a handful of passengers to the edge of space and then lands on a runway. So far, Virgin Galactic has sent VSS Unity to space only twice, with a total of five passengers on board. The plan is for commercial operations to begin sometime in mid-2020, when Branson himself will take to space for the first time.

Branson and Virgin Galactic CEO George Whitesides spoke with The Verge about today’s public offering and how it will help the company in the months ahead.

This interview was lightly edited for clarity.

The Verge: I’d love to know how the first day of trading is going in your opinion.

Richard Branson: I’m looking at the chart as you speak and the bigger arrow going straight out. I think we’ve had two really good days. So the 11 percent rise on Friday, and then 5 or 6 percent today. Anyway, looking good.

How hopeful is this listing going to be for you, since you’re still in development and trying to get to those first commercial launches going mid-next year?

Branson: Virgin Galactic raised half a billion dollars … We were going to do a deal with the Saudis which we turned down a few months ago, because of the Khashoggi incident. Having that money in the company, it replaces the Saudi money, and it will be very helpful in getting more people, getting more spaceships on the way to be developed, getting another mothership built and finishing up the job.

We will be putting people, including myself, into space next year. And once we start putting people in space we’re going to need to try to speed up the process of getting as many spaceships as we can get our hands on.

You’ve just had a big milestone with the second spaceship [powering it up for the first time]. Can you explain how development is going with that one?

George Whitesides: Yeah, obviously you know that’s a huge milestone, for any vehicle, is the day that you can really turn on the avionics, turn on the electrical, and it’s all being driven internally from onboard batteries. That’s a big deal. We still have a good ways to go on that vehicle, but you know, I think what’s encouraging is it’s starting to look like a spaceship structurally.

Earlier you discussed your financials and how right now revenue is slow, because you’re not selling tickets. How crucial are those additional spaceplanes and when do you expect to open up tickets again and to see more revenue coming in?

Whitesides: The additional spaceships are really important for the business. We need to bring additional capacity into the market, and we think that we’re going to be able to sell those seats. We’ll have one vehicle — [VSS] Unity — operating, and then we’ll bring another one in relatively soon after that. And we’ll just keep adding them in sort of almost like once a year; that’s the sort of general plan.

“The additional spaceships are really important for the business.”

You know, we have some 600 customers who have paid up, but since the December flight, when we opened up the ability for people to register their interest in buying, we’ve had over 3,700 people make that reservation. So that’s tremendously encouraging to us. These are people who are ostensibly aware of the ticket price. We’re pretty encouraged by where we are right now.

Explain to me again the plans for ticket prices. As I understand it, there’s going to be a short increase in price, followed by a decrease. Can you explain how that’s supposed to work?

Whitesides: Yeah, it’ll go up for a bit, and honestly, we’re going to have a dynamic pricing scheme. We think that we… frankly, we sort of underpriced it probably for a while. But that’s okay; that’s to the credit of the good folks who signed up early. Those are sort of the early adopters. We’ll raise the price to reflect the development costs and other costs associated with it. But over time, our whole business is to reduce costs, and it’s hard to predict exactly what the time frame will be. It’ll be essentially market driven, but that is the long-term goal.

What’s the main way that you envision reducing that cost? What will it take?

Whitesides: It’s a couple of different things. One of them is just sort of normal aerospace manufacturing efficiencies — both on the spaceships as a whole, as we build additional spaceships, our per-unit cost will go down. And then also with marginal equipment-based things like our rocket motor cartridge — we’re already integrating innovations that enable us to build them cheaper, but still maintain quality.

Richard Branson celebrates the first day of trading for the world’s first and only publicly listed human spaceflight company. A milestone that puts @VirginGalactic on a clear path towards starting commercial service. https://virg.in/imK  @NYSE @richardbranson 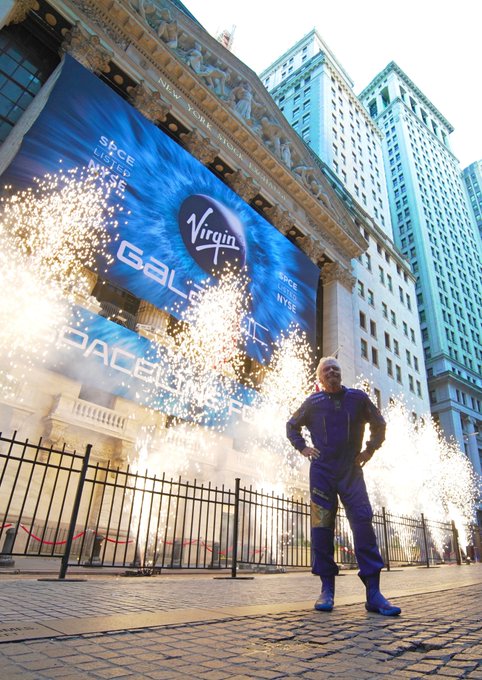 161 people are talking about this

Also the business has an interesting dynamic within it, which is: once you’ve got a group of people who can operate one spaceship, to add a second spaceship in doesn’t actually take that many more people to add. We think on the order of maybe 10 to 15 percent. And so you can see if that’s true, then adding a couple of spaceships in, your per-flight labor economics are actually getting much better.

You have had a recent string of milestones. Today’s filing comes just two weeks after the unveiling of your flight suits. What’s next, and when can we expect the next flight to space?

Whitesides: We’ll have a lot more fun things to come. I don’t want to give away what they are, but we still have the unveil of the spaceship interior, and a few other really fun things that you’ll see coming down the road. We need to finish the move down to Spaceport America before we begin the last phase of our test flight program. And then, if all goes well, we’ll be in a position to fly that historic first flight for Richard.

“If all goes well, we’ll be in a position to fly that historic first flight for Richard.”

Branson: And whoever comes up with me, which we will be announcing sometime quite soon!

Can you say how many people will be coming up with you?

Branson: No, I’m afraid we’re saving this one up, but thanks for asking.

What was it like to see the company start trading under the SPCE symbol today?

Branson: It’s taken 15 years to get here and an enormous effort by just under 1,000 engineers, and lots of ups and downs. It was just great. And also we were very lucky to have the SPCE symbol. I’m not really allowed to say, but it was the generosity of another exchange that gave us this. And we were extremely grateful that they let us have it. It just couldn’t be better to have the ticker SPCE as our symbol.

You mentioned ups and downs, and it has been a long road to get here. I’m curious, what do you have to say for anyone who might be a little wary of investing in the first publicly traded human spaceflight company?

Branson: It doesn’t seem to have been an issue. I mean, we’ve got a tremendous group of institutions who have come in — some of the biggest institutional names. And the public seems to be coming in in quite large numbers. It’s an exciting company, but it’s also a company that has all the potential of making fantastic returns. And we’ll do our best to honor all the investors that have come into it.