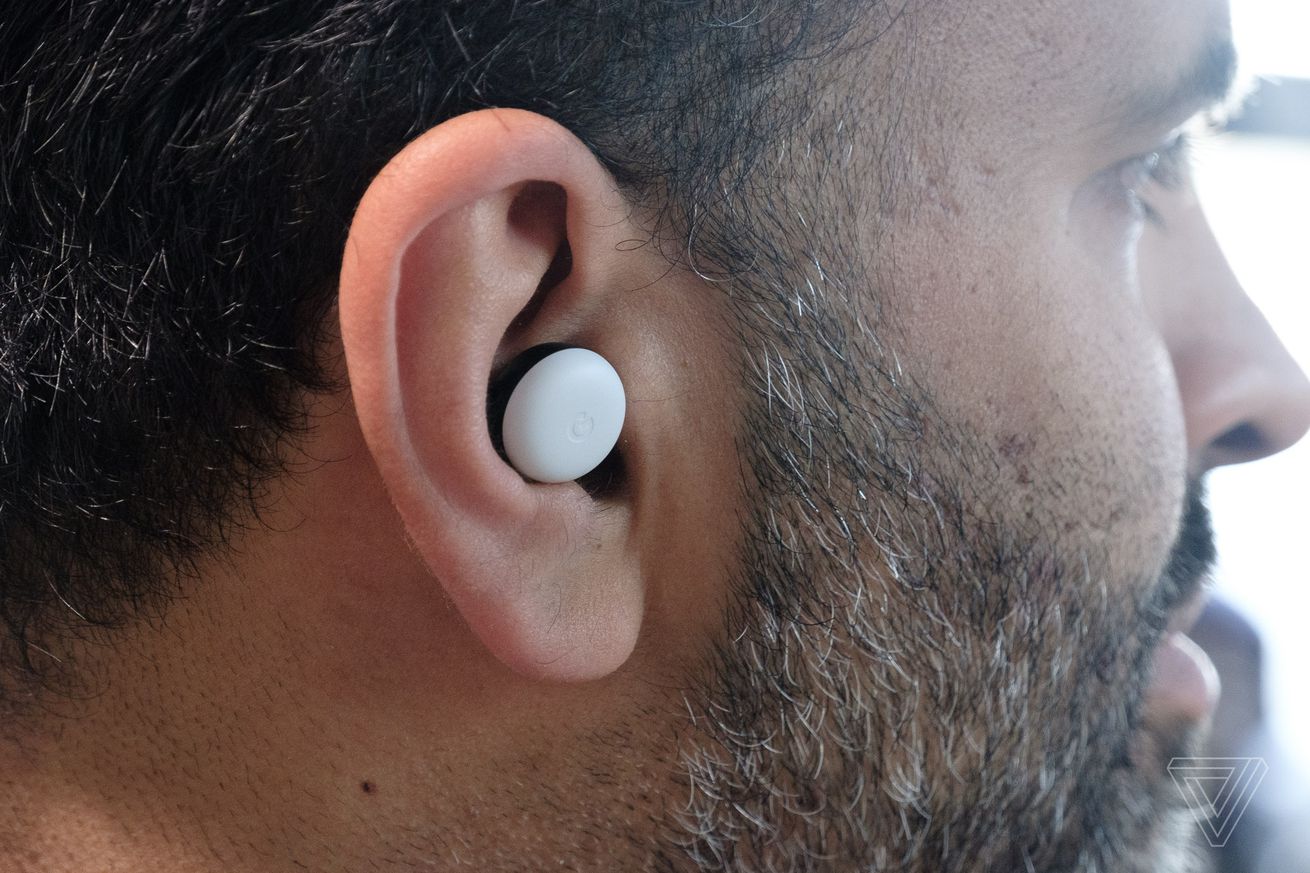 Photo by Dan Seifert / The Verge

Google announced a new version of its two-year-old Pixel Buds headphones on Tuesday, alongside the new Pixel 4 phone. The Pixel Buds 2 are smaller and lighter, and they also ditch that fabric-colored cord that connected the original pair. They’re truly wireless earbuds now, and that makes them a better contender against Apple’s AirPods, the Samsung Galaxy Buds, and others.

We won’t know exactly how they sound or how well they’ll work till 2020, since Google won’t be shipping them until then. But what we can talk about right now is their design and fit, which is more important to some consumers than even sound quality, and just how much competition they already have right now.

A lot of wireless earbuds are unattractive, can sometime fall out of people’s ears, and may involve tons of tinkering to keep them snug and comfortable. The reason AirPods have been so successful, despite the obvious audio quality drawbacks, is that they work well with the iPhone, have an acceptable look (some people may disagree), and fit well for most users. Google will have to hit many of the same comfort and style marks — and hopefully work well with Pixel devices — if it wants to its buds to be a proper Android analog to Apple’s.

We’ve rounded up some of the Pixel Buds 2’s biggest competitors below, while listing a few key specs like battery life and price. Plus, you get to see how these devices actually look in people’s ears, which can be a dealbreaker depending on the model and your personal preference.

The Pixel Buds 2 certainly look like a huge improvement over the original Pixel Buds, which protruded out of your ears and suffered from an awkward bud design that meant they needed constant adjustment. The Verge’s Sean O’Kane described the original model as “full of little flaws that make life with them a frustration” in his rather lukewarm review.

The new Pixel Buds, however, look much smaller and lighter, although Google hasn’t released full specs yet. According to The Verge’s Nilay Patel, who tried them on at Google’s Tuesday event, they fit much better, too.

Just one look at these original Pixel Buds, compared to the second-gen version, is enough to make you run for the hills. Plus, that cord is doing no one any favors. It’s a good thing Google was able to experiment here with a first-generation version, but I think we’re all in agreement that this was used mainly to pave the way for Google’s sequel and shouldn’t be anyone’s wireless earbuds of choice.

AirPods are in a league of their own, and not just because they’ll connect faster to the iPhone, thanks to Apple’s H1 and W1 chips, than a non-iOS device. Apple’s take on the earbuds refashioned its EarPods design into a wireless pair of headphones by simply clipping the cord, allowing them to maintain the company’s long-iconic earbud design.

Yes, there’s no interchangeable silicone bud tips to size them to your ears, and you have to contend with that extra-long cylinder trailing down the side of your jawline. All that said, AirPods work well, fit great if you do happen to have the right ear shape for them, and are incredibly lightweight.

Microsoft isn’t going to win any awards in the fashionable design department with its Surface Buds; they’re gigantic, even if that satellite dish-looking design is supposed to facilitate more granular touch interactions. Then again, Microsoft isn’t really going for sleek and stylish.

The company made the Surface Buds to work as an office tool as much as a music-playing device, so they can live transcribe what you’re saying as you give a presentation, then summon Cortana with a long press on the side of the buds. But don’t worry. If you’re wearing these around in public, we’ll assume you’re just taking a really important call.

Amazon entered the wireless earbud market last month, just a week before Microsoft’s entrance with its Surface Buds. But where Microsoft went higher-end and business-focused, Amazon is going for cheaper and more consumer-friendly. The Echo Buds look just fine, if not a bit on the larger end.

That’s to be expected, as Amazon appears to have adopted longtime wireless earbud maker Jabra’s overall look and feel. But hey, for a price that low, plus the noise isolation and Alexa voice features, that seems like a solid deal.

I’ll say it: I think the Samsung Galaxy Buds look awful. And in my personal experience using them, they did not fit great either, although they did come with plenty of interchangeable bud tips. Granted, these are among the cheapest name brand wireless ear buds you can buy, so it’s understandable that you’d take some hits in the design, comfort, and sound department, and we found that to be true in our official Galaxy Buds review. One area the Galaxy Buds do hold up is battery life, if that’s a consideration.

What Sennheiser’s Momentum True Wireless ear buds lack in aesthetics, they make up for in sound quality — at a price. These are among the most expensive wireless ear buds you can buy, and they’re also reportedly plagued by some battery and connectivity issues. So while they may be more comfortable than some and sound better than most, it’s hard to square that with the price tag and the apparent issues that have gone unsolved.

Sony’s latest iteration of wireless earbuds are perhaps the biggest, most protruding model on the market right now. It looks like an antiquated Bluetooth earpiece, granted a much more attractive one than those gadgets of old. That said, Sony has a lot going for it to justify that design. It’s got amazing noise cancellation, incredible battery life, and superb sound quality. (It’s also one of the more pricey options.)

The not-so-subtle design is the tradeoff you have to endure for features like those. Also, take a look at the weight of its giant, premium charging case. That’s not too easy to carry around compared to other models.

If Sony’s WF-1000XM3 headphones are the feature-packed yet relatively stylish approach to a pricey, protruding pair of wireless earbuds, the Powerbeats Pro is what you get when you just don’t care what you look like when wearing an electronic device literally on your head.

These things scream exercise headphones, which they indeed are designed to be, and they have that old-school wrap-around design a lot of wireless headphone makers have all but abandoned. They also appear to weigh a lot more than the competition. But according to former Verge headphone aficionado Vlad Savov, these earbuds have fantastic fit, sound incredible, and come with unbeatable battery life.

Jabra’s Elite line was among the first to really crack the combination of battery life, connectivity, and sound quality that let the headphone market make way for true wireless earbuds, and not just over-the-ear cans.

That said, the Elite 65T, which came out last year and are about to be superseded by the new but similar-looking 75T model, aren’t the most attractive pair of buds out there. They do come with customizable bud tips, but one common complaint is that they get rather uncomfortable during extended listening. But they’re more discrete than most, and get the job done in the event you’re no fan of AirPods and aren’t looking to spend more than $200.

Jaybird, like Jabra, has been at this quite a while, long before the any of the Big Five tech giants got in on the wireless earbud game. Now owned by Logitech, Jaybird returned to the market this summer with the Vista, an update to its Run earbuds with a focus on outdoor exercise and running.

They’re pretty low-key in the design department, and the relative low weight puts them on par with the standard consumer earbuds from other tech companies, though with the added benefit of IPX7 waterproofing. Jaybird also some nice earbud tip replacements that come in the box for finding a proper fit.

Mater & Dynamic are well known for making some of the best consumer-grade over-the-year cans out there, and the company brings the same high build quality and visual flair to its earbuds. The newest set, the MW07 Plus and the cheaper Go variant, carry over the original MW07’s sleek, industrial look with pearlescent and pastel color schemes, for the Plus and Go respectively.

Thankfully, the premium-looking chrome charging case has remained intact, too, which now packs an eye-popping 40 hours (or 22 hours on the Go). Sure, they cost a lot and are mighty heavy, but they look so much better than your standard wireless earbud.