Giphy Arcade lets you play, create, and share mini-games on the web as if they were GIFs 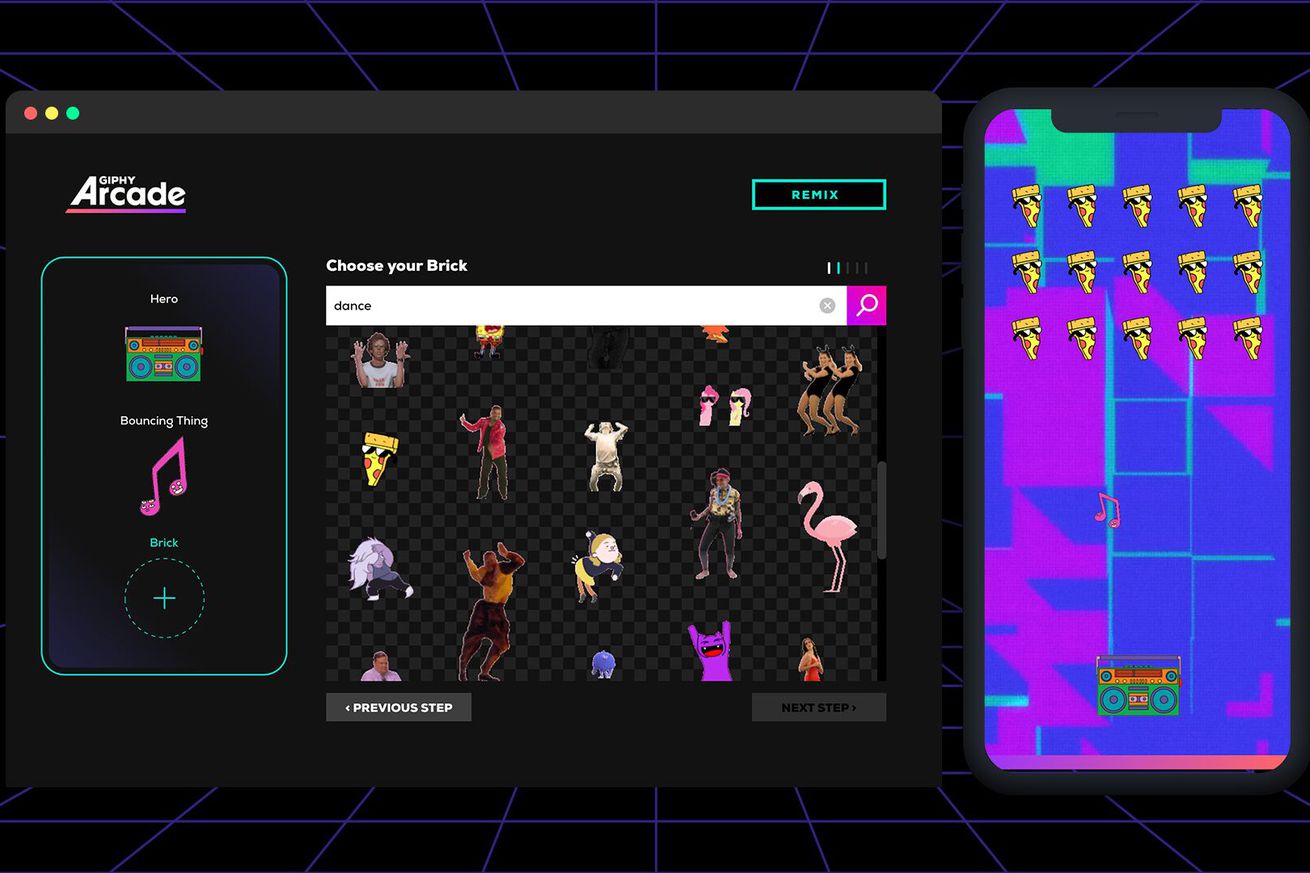 Giphy today announced the launch of Giphy Arcade, a gaming platform designed to let people play, create, and share mini web games as easily as they would animated GIFs.

The company, founded in 2013 and oriented around the GIF database and search engine it allows other platforms to integrate, has expanded its scope in recent years to include creative tools, including its own take on Snapchat and Instagram Stories. With Arcade, Giphy wants to get into gaming but with a more bite-sized approach that also plays nice with the open web. That way, the games can freely move across the internet like the best viral GIFs.

Arcade has three components. The first is the standard game playing feature. From its web app, which is accessible on desktop browsers or on mobile ones, you can see a series of playlists featuring popular premade games.

The experiences range from standard mobile-style endless runners to riffs on arcade classics like Breakout and Centipede. One noticeable difference is the art style: all of Giphy Arcade’s games feature crude internet art pulled from popular GIFs, memes, emoji, and other artifacts of the web and pop culture. And almost every game has a simple one-tap or tap-and-drag mechanic that can be done with a mouse or your finger on a touchscreen.

But Giphy doesn’t just want people to play its admittedly rudimentary web games. It wants internet users to “remix” them as well, which is Giphy’s term for taking the same ingredients and developing a new twist on the game you just played. That typically means picking new art for the playable characters by searching Giphy’s GIF database, choosing a different moving background image from the available collection, and selecting music from a list of tracks Giphy has created just for Arcade.

You can also go through the process of creating a game from the ground up, starting with one of eight templates that include some obvious nods to popular mobile and classic arcade titles, like “Floppy Bard” and “Blast ‘Em Up.”

The final component to Giphy Arcade is the share function, which the company hopes will help the games created on the platform and the lightweight development tools used to make them spread far and wide. With just a link, anyone will be able to play a game you’ve found on Arcade or created yourself, and that person can then either share it further or remix it first before sending it along to more people. And all of this is done on the web, without requiring you to download a new app.

“When exploring what games could look like for Giphy, we knew the experience had to be quick, shareable, and accessible for everyone, including people who don’t necessarily have a history with gaming” Nick Santaniello, a senior product engineer at Giphy, said in a statement. “With Giphy Arcade, we’ve created an experience that provides not only instant fun for the player, but also a new way to add personalized expression and entertainment to conversations as they’re happening.”

Giphy is partnering with Wendy’s to start, showcasing the brand deals Arcade could foster

The Giphy Arcade platform is launching today, and it’s doing so with a brand deal in place with fast-food chain Wendy’s. That’s a strong indicator of how the company may be able to monetize this platform in the future, given that it does not intend to sell any games or let users charge for access either.

The Wendy’s deal will make the company’s logo, tagline, mascot, and signature food items available as game assets users can use to create new Arcade titles or remix existing ones. It’s not hard to imagine this becoming a marketing strategy for other companies to experiment with, so long as Giphy Arcade actually gets the ground.

But to do that, Giphy needs to make sure its tools don’t go unnoticed and that whatever games do get made on the platform get remixed and shared, so new users can find their way to Arcade and do the same. It’s a tall order, especially on the open web and without any form of login system or traditional social networking infrastructure. But Giphy established itself as a vital tool in the social and messaging spaces by creating the GIF search engine and database other companies weren’t able to do on their own. Perhaps it could do the same for GIF-powered games.