When the Search for Jobs Ends in Slavery 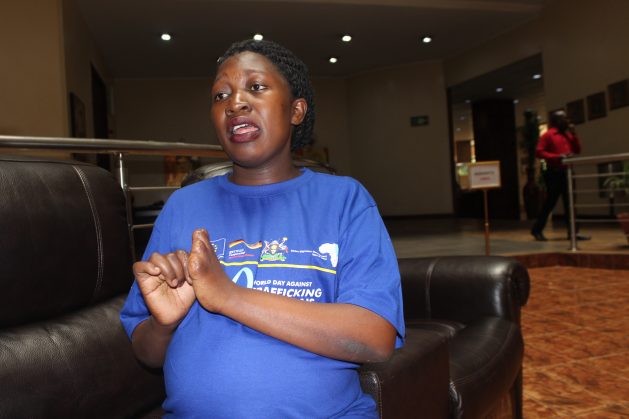 Zubedah Nakitende was trafficked as salve labour to a family in Jordon. Her employer gave her a cream for her injured fingers that was actually turned out to be acid. Nakitende’s fingers were so badly injured they had to be amputated. Credit: Wambi Michael/IPS

KAMPALA, Sep 18 2019 (IPS) – In 2017, Zubedah Nakitende’s electronics shop was robbed with thieves taking her entire stock. But she had heard from a colleague about lucrative jobs in Jordan and decided to take on work as a domestic helper, earning an income of 740 dollars a month.

“I was desperate, I had debts. So I said let me go and work to pay those debts,” Nakitende told IPS.

She made contact with a trafficker, known by the pseudonym Abu Ahmad, with whom she communicated by phone. On his advice she travelled by road to Kenya’s capital, Nairobi, where she was given an illegal visa and flown to Jordan.

But she ended up placing her life in the hands of a criminal network that sold her as slave domestic labour. And in the end she lost four of her fingers and never earned the money she had hoped to to pay off her debts.

She was forced to work through the pain

Nakitende was herself forced into salve labour. Her passport was taken by the domestic recruitment agency in Jordan and she was taken to a home in the city to work.

One day she told her employer that her hands ached. Her boss gave her a liquid, which Nakitende thought would ease the pain. Instead it turned out to be an acid that burnt her fingers.

She was in deep pain but her employer forced her to work saying, she “had been bought for that purpose”.

Eventually she was sent back to the recruitment company that facilitated her employment so she could receive treatment. But the medication could not relieve the pain. “It instead worsened the situation as the palms turned black and swollen,” Nakitende said.

In the end she was taken to a specialist who recommended she return to Uganda “because I would no longer be able to work”.

Upon return home she went to hospital for treatment. But her fingers were so severely damaged that the only course for her was amputation.

“I went to Jordan knowing that I was going to work but I returned with a permanent injury. I did not get any money. The trafficker even took the money that had received to facilitate my treatment,” she recalls.

Nakitende has just completed psychosocial support and rehabilitation by Willow International — a nonprofit organisation with an office in Uganda’s capital that provides rescue and restoration support to survivors of trafficking.

Flavia Amaro, a programme officer with Willow International, told IPS that some of the victims have been referred to the Butabika National Referral Mental Hospital in Kampala for treatment for a range of mental issues that mainly related to depression.

She said 15 women were receiving counselling and treatment at the time of the interview. One woman, she said, would always stand still, without moving. “From our assessment, we realised that she was locked up in a very cold room for a longtime,” said Amaro.

Security officers at Uganda’s border with Kenya, at Uganda’s Entebbe Airport and officials from the Civil Aviation Authority and immigration departments have been accused of colluding with traffickers to facilitate the travel of trafficked persons.

Jessica (not her real name), a survivor of trafficking, told IPS that her travel to Jordan was facilitated by ground staff and immigration officials at Entebbe Airport. She said the trafficker who helped her leave Uganda for a job as a domestic worker in Jordan had been in contact with them.

Jessica, who worked as slave labour and was beaten on several occasions, was eventually rescued by her member of parliament. She posted a video explaining her ordeal on social media and reached out to Ugandan legislator, Louis Gaffa Mbwatekamwa. Mbwstekamwa travelled to Jordan, with permission from parliament, and brought her home.

Uganda’s Directorate of Citizenship and Immigration Control spokesperson Jacob Siminyu did not rule out the fact that some immigration officials were working with traffickers for personal gain. He said the directorate worked with the police and other agencies to ensure that trafficked persons were not allowed to exit Entebbe Airport.

The Commissioner of Police Anti-Human Trafficking National Task Force, Moses Binoga admitted that there were intuitional challenges in the implementation of the trafficking law but noted the level of awareness about trafficking persons has increased since the law was enacted.

He revealed that a number of convictions of the traffickers after a number of judges were trained about the crime of trafficking. But there remain challenges.

“The existing processes and systems of assisting victims are not sufficient enough. For instance, [there aren’t] sufficient funds for paying fines and return air tickets for all the reported stranded victims in foreign countries,” Binoga told IPS

Damon Wamara is the country director of Dwelling Places, a non-government organisation dedicated to the rescue and rehabilitation of internally trafficked women, agreed that Uganda has a good law against trafficking in persons but implementation was a big challenge.

He said the Anti-Human Trafficking Task Force was poorly staffed yet it has to handle over 11,000 victims that either need rehabilitation or repatriation annually.

Uganda’s High Court judge Margret Mutonyi recently told IPS that there is need for Uganda to establish a special court to handle issues related to trafficking in persons. She said the current court system was too adversarial and tended to leave the victims more traumatised.

“The ordeal they go through affects them mentally, physically and psychologically. Some think there is nothing to protect or defend. Their dignity and integrity is affected profoundly. They don’t think there is any punishment that can atone their hearts,” she said.

Mutonyi agreed with other activist groups pushing for a victim-witness protection legislation in Uganda.

Civil society groups in Uganda have argued that the absence of such a law has hindered investigations and prosecutions because perpetrators can threaten and blackmail victims and witnesses, discouraging their participation in trials.