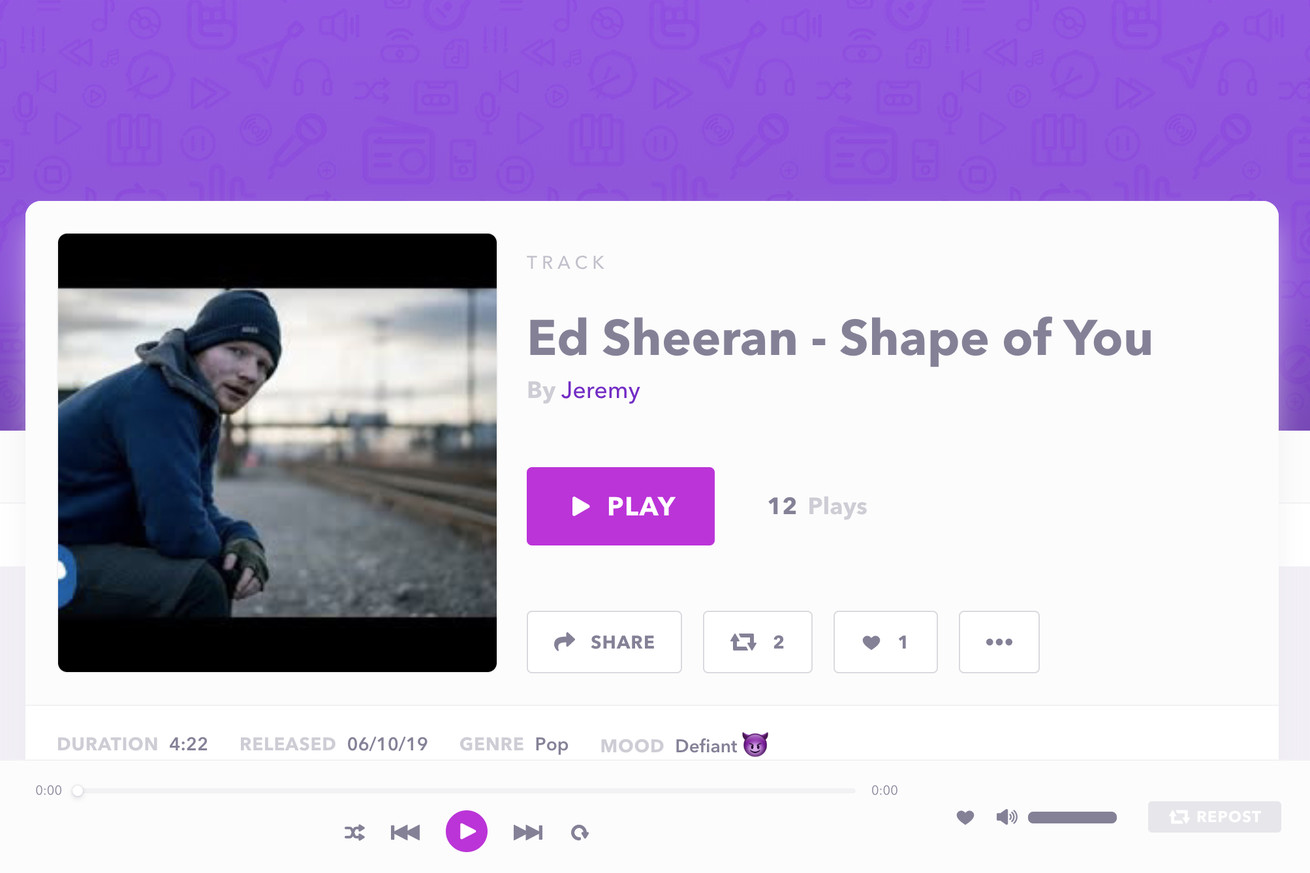 Audius’ website says “music platforms were at their best when they listened to what artists and fans wanted – not corporations or major labels” and that uploaded tracks can “never be censored or removed.” TechCrunch called Audius’ blockchain move its “secret sauce,” while Yahoo finance said it is “adequately addressing the most pressing needs within the industry.” But one of the most pressing problems in music right now is copyright. Audius contains infringing material — such as an unlicensed version of Ariana Grande and Iggy Azalea’s “Problem” — that, if its promotional materials are right, the company cannot remove.

Audius is directly competing for SoundCloud’s audience, which may explain its problems. Once SoundCloud was a haven for up-and-coming artists, hosting then-unknowns such as The Chainsmokers and Lorde, but it also hosted a lot of infringing material: remixes, mashups, and often entire songs. Although SoundCloud had a content ID system in place since 2011, it began more rigorously enforcing copyright complaints after inking deals with labels, often with haphazard results, so hardcore users started looking elsewhere. In trying to appeal to these users, Audius is running into the same problems.

“They say ‘We don’t have the ability to deplatform you or censor you.’ What I hear when I read that is, ‘It’s going to be real difficult for us to take down anything that you put up,’” says Kevin Casini, a professor of entertainment law at the Quinnipiac School of Law in Connecticut. “They’re trying to speak as if they’re talking to people who are afraid of this bogeyman intermediary. And they’re also saying, ‘Hey, this is a new spot where you can, at least for a brief amount of time, upload something, and we’re not going to look at it and see what it is.’ It seems that they know this is something that is going to happen quickly for them, and they’re signaling and advertising to the people that actually know what they’re saying, which is: ‘You can come here and do it.’”

Audius contains infringing material that, if its promotional materials are right, the company cannot remove

Audius says it’s aiming at the up-and-comers who once would have used SoundCloud. “We really see ourselves getting into the same niche as SoundCloud right now,” Audius CEO Roneil Rumburg tells The Verge. Audius might even have a shot at it. Indie artists’ hackles were raised by a self-monetization contract rolled out by SoundCloud that allowed it to change payment terms without notification and blocked artists from ever suing the company.

There are real problems in the music industry: bad and non-standardized metadata, missing contributor credits, unidentified recordings that need to be matched, copyright infringement in every shape and form, and lack of sophisticated audio fingerprinting tools. Human errors with metadata mean musicians miss out on routine payments, for instance. Just recently, a scammer was able to put an unreleased Kanye West album on Apple Music as ringtones. Artist imposters are able to profit off others’ work on streaming services by simply mislabeling songs or making adjustments to the audio, like slightly pitching a song up or down.

Blockchain solves none of this and, in some cases, makes it worse.

“On the surface, a lot of people think, ‘blockchain is perfect for this,’” says Jack Spallone, senior product manager at ConsenSys. “Not quite. If [the music industry] could use Excel really well, it might not even be an issue.”

Audius is trying to avoid SoundCloud’s copyright issues by not hosting the user-uploaded content itself. Its open-source protocol, built on blockchain, means that the responsibility of hosting and making uploaded content available is spread out among people who register as node operators. They say this method should protect them from liability and the claws of major labels. This is actually an open question. Copying and distribution initiated by the user but carried out by a system has insulated some companies in the past, but it has not been a sufficient argument for others.

There are other red flags with how Audius is set up: the company confirmed to The Verge that there is no content ID system in place to catch potential infringement. Though individual uploaders can be held liable for infringement, there’s no way for Audius to remove infringing material, and there is also no way to file an infringement claim on the website. “A formal process is in the works,” a company representative said.

Whether this business model holds up in court or not, lawsuits from major publishers or labels could easily wipe out Audius’ capital. And if you’re buried with lawsuits, you have no money for anything else. It remains to be seen how labels and other rights holders will react to Audius, which has, in a short time, become saturated with infringing material.

Original Ed Sheeran songs are available to play on Audius right now, along with songs registered to labels like Dim Mak and Spinnin’ and scores of unsanctioned remixes using material from the likes of Kanye West and Eric Prydz. None of these artists are getting paid for this use. In fact, Audius says, no one at all is getting paid yet. The implementation of payments is slated “TBD as sometime next year,” Rumburg says.

Even if Audius isn’t directly liable for infringement, it can still be held secondarily liable if a court finds it promotes “its use to infringe copyright, as shown by clear expression or other affirmative steps taken to foster infringement.”

Experts are skeptical about whether being on the blockchain is enough to protect Audius from washing their hands of bad actors. Historically, services like Groksterused similar arguments. After all, Grokster didn’t host any material; it only allowed the means for people to share files with each other. But it lost that fight in the Supreme Court, and it shut down in 2005. “That’s what all the early peer to peer services said too and it didn’t super work out for them,” says John Bergmayer, legal director at Public Knowledge.

Audius views its role essentially as an open-source software producer, Rumburg says. “We basically give artists and listeners the tools they need to interact with one another directly. We help steward that community but we’re not actively posting content or operating the code.”

I ask Bergmayer if that’s enough to protect the company. “I’m all for a looser copyright system, but I don’t want people to put forward these legal arguments that have lost,” he says. “If there is an underlying direct infringer and you’re doing something, anything at all, now or in the past that in some way facilitates that, there is probable claim against you.”

Out of all of the different types of art that can be protected with copyright, music is one of the messiest to deal with. To start, every song has two copyrights: one for the composition and one for the recording. Most songs have a lot of people and entities that need to get paid on both sides every time a song is played — from the record label to the songwriters to the people actually performing the song.

Here’s an example originally used by Annie Lin, senior corporate counsel at Twitch: Katy Perry’s “Firework.” Capitol Records owns the recording for “Firework,” but five different songwriters with five different music publishers own percentages of the composition rights. Most existing music works this way; imagine the logistical difficulties of convincing everyone from hundreds of territories around the world, which all have varying copyright laws, to switch over to blockchain.

But can Audius attract an audience?

This is probably why Audius is taking the SoundCloud route. The easiest way for blockchain to be used with music streaming services is to focus on controlled compositions — that is, songs that are written, owned, and controlled by a single entity (i.e., many up-and-coming artists). That market’s still a sliver of music as a whole.

Additionally, focusing on such a niche market means facing the economic reality of competing with the likes of Spotify, Apple Music, Amazon, and, yes, SoundCloud, all of which have licensing deals in place with the majors to provide massive catalogs. People are already getting music on these services for $10 a month, so convincing them to sign up for another service without any of their favorite popular artists is tough.

“Okay, well, we won’t deal with the majors,” says George Howard, associate professor of music business / management at Berklee College of Music and Brown University, describing this general strategy. “We’ll just stand up some music thing with a bunch of artists nobody’s ever heard of and wonder why the fuck nobody comes to our thing because they don’t understand network effect.”

There are other problems facing any blockchain-based music streaming service. How can a copyright holder identify who is hosting the infringing work other than by issuing a subpoena? How can the service comply with a DMCA notice when content is immutably embedded in a blockchain? What liability does a node operator face for hosting infringing material, which the operator may not have uploaded? Or users for uploading it?

Blockchain technology might be useful in some cases in music. For instance, it could create scarcity with limited edition digital releases or be used to reward and share revenue with fans, like Imogen Heap did on her last tour. But using it for a music streaming service is unnecessary, and claiming that it’s a solution for any of the biggest issues facing musicians is simply untrue. “They don’t understand copyright law,” Howard says of Audius. “They have a barrier to assume evil with the big stakeholders, and that’s just going to crash and burn. The problem with it is that, yet again, it sends a signal that blockchain and music doesn’t work.”