Destiny 2: Shadowkeep is the game Destiny always should have been 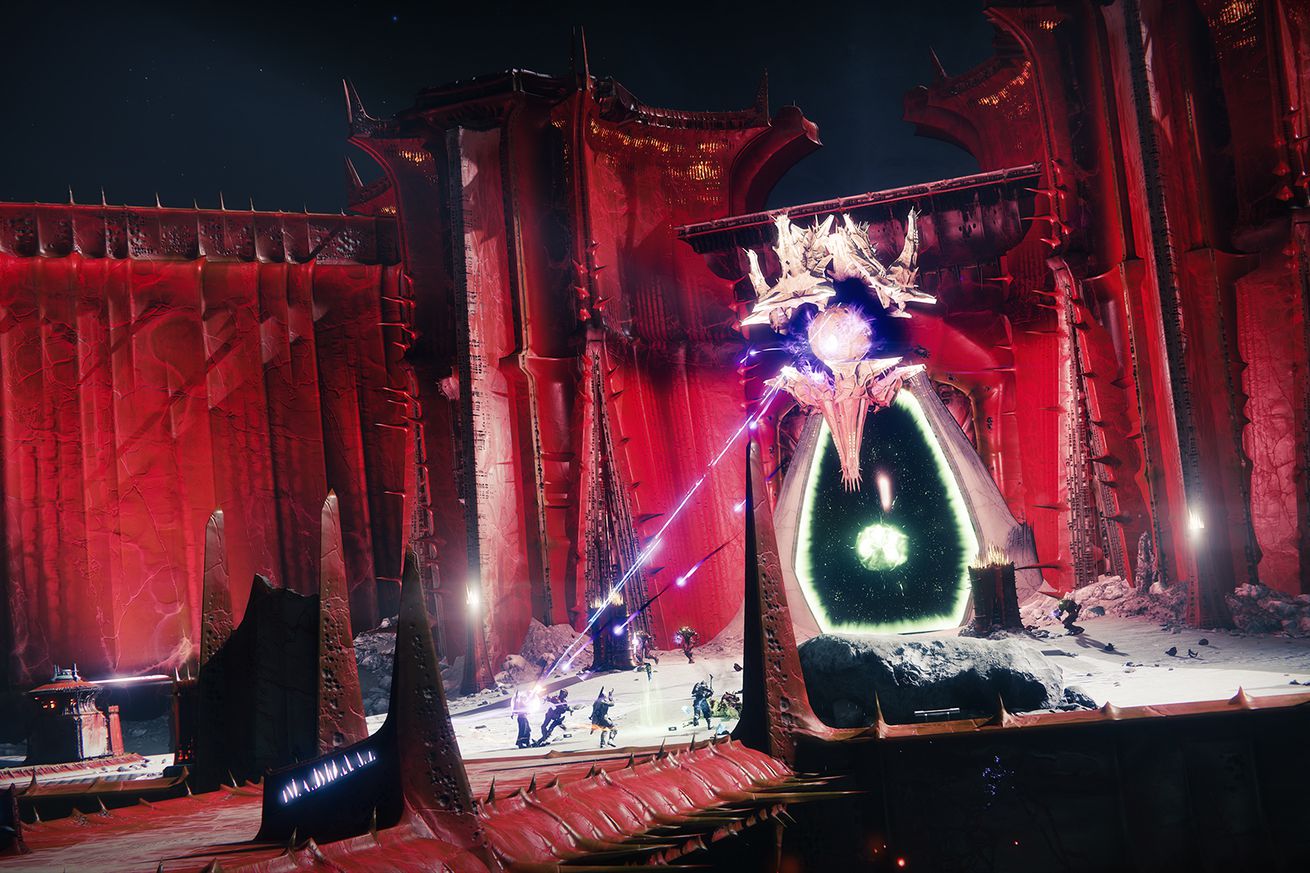 Yet where does Destiny go from here?

In my five years playing Destiny, I had come to believe that there were aspects of the sci-fi shooter that would never change.

I thought Bungie, the famed creator of Halo, would forever remain frustratingly stuck between delivering what it’s best at and what it hoped to achieve. The studio is unrivaled at designing exhilarating fantasy firearms to shoot at monstrous, primordial aliens, all against the backdrop of awe-inspiring, otherworldly vistas. But it’s fallen short of mixing those high-octane mechanical elements with the narrative and social scope of a true massively multiplayer online game, in the vein of World of Warcraft and other titles that inspired it.

I also thought Destiny would remain beholden to its publisher Activision, resulting in all sorts of decision-making and business choices that run counter to delivering the best possible product. For instance, I believed all the progress I’ve sunk into the game on PS4, including more than 700 hundred hours of Destiny 2, would remain stuck there, where a dwindling group of my friends still picked up the game every week. It had never occurred to me that Activision, or platform owner Sony, would ever let my account migrate elsewhere. I considered it a non-starter.

Shadowkeep, the latest expansion for Destiny 2, has made me reconsider all of this. The game now features cross-save, meaning I’ve moved my account over to Steam on PC, after Bungie split with Activision and acquired the rights to the game earlier this year. The studio has also restructured its entire release model to accommodate a new free-to-play version, a seasonal battle pass to help fund future expansions, and an ambitious release model that promises new activities and interweaving storylines at a steady clip throughout the year, instead of in large batches that dry up quickly.

Shadowkeep itself is not the biggest or most ambitious expansion the series has ever seen — that continues to be last year’s Forsaken. It’s also not the most impressive from a narrative standpoint, as some of its new missions and activities feel a bit too steeped in the game’s arcane backstory. But taking into account those long-term changes to how the game will be designed and distributed, as well as played across platforms, Shadowkeep is without a doubt the strongest representation of Bungie’s ultimate vision for Destiny to date.

For those who have never played Destiny 2 or its predecessor, there is not much I can tell you about Shadowkeep’s plot or the actual meat of the expansion that will make much sense. But to lapsed players or those aware of the game’s general themes, the game’s Guardians (that’s you) find themselves returning to the Moon, the original off-planet destination from Destiny 1.

There, the warriors of the Traveler, an ancient life form that can imbue human beings and other aliens with supernatural powers and resurrection abilities, are investigating a threat that Bungie has been building toward for about half a decade. In the first game, it was called the Darkness, an all-consuming evil that stands in opposition to the Traveler that always manifested itself in intangible ways, usually by corrupting alien races. The studio dropped the clumsy naming scheme for its villain with Destiny 2, but the general outline remains the same. It’s an evil entity, and it wants to destroy humanity. So you must fight it.

This is all well and good, and players that love Destiny lore will have a fine time returning to the Moon and reuniting with fan-favorite character Eris Morn. Exploring the old location filled me with nostalgia, and the new strike, the generally well-designed story missions, and the six-person raid activity all feel like a proper culmination of Bungie’s storytelling evolution with Destiny. There are also scores of weapons and armor pieces to collect and lots of lofty goals and milestones to spend your time striving for, including a new power cap and in-game triumphs and titles to earn mostly for bragging rights.

Bungie has also begun introducing concurrent storylines to help build out its narrative over the course of weeks and months of real-world time. When I logged in last weekend, a new cutscene showed the machine race Vex invading the Moon. It marked the launch of an all-new seasonal activity, tied to the launch of the Vex-themed raid, called Vex Offensive. It was not a part of Shadowkeep’s campaign, but an all-new separate story thread.

Bungie has a road map planned for the Moon’s endgame “Nightmare Hunts” and Vex Offensive that both build toward higher-level activities that only unlock late in October and November, alongside a new quest for a coveted exotic weapon and the launch of a new dungeon (Destiny parlance for a mini raid). This all feels very much like Bungie learning from its multiplayer competitors, primarily those in the battle royale scene, about how to properly pace a seasonal content model.

Yet evaluating the success or failure of Destiny and any of its expansions is less about critiquing the story or the individual moving parts, and more about how the game treats your time. And overall, Bungie has overhauled Destiny 2 in surprising ways that make it feel like it’s stepping much closer to the true shooter-MMO hybrid it was always designed to be.

A standout change in Shadowkeep is Bungie bringing every one of your characters up to the starting light level of the expansion, ensuring players don’t spend countless hours grinding out mindless and otherwise months-old activities just to be on an even playing field. The studio also simplified its infusion system so you can upgrade lower-level gear more easily, and totally reworked its armor customization options to make them more in line with a true RPG.

In many ways, this is evidence of Bungie finding the right balance between overtly demanding and time-consuming “hardcore” gameplay and more casual fare. Destiny 2’s entire first year was a string of compounding failures that only revealed themselves as counterintuitive steps months after release, when the player base began complaining that there was nothing to do and the game’s deficiencies became more evident. Bungie, in its quest to make the game more accessible and less like a second job, had instead drained Destiny of its most vital and sticky elements.

Over the course of the last 18 months or so, the studio has been carefully returning removed features, tweaking existing systems and adding new ones, and overall, striking a better middle ground. That way, players can play the game at length without feeling like they’re pushing a boulder up a hill without a summit. When Forsaken launched in September of last year, it felt like Bungie had turned a corner and turned the game into something spectacular again. This has continued as an ongoing, incremental process over the course of the last three post-Forsaken expansions. But with Shadowkeep, that vision feels more fully formed than ever.

Destiny 2 is far from perfect. The game’s competitive Crucible multiplayer — once occupying an entire half of the original game — is still in shambles, plagued by balance issues, patches that arrive at a glacial pace, and an overall lack of developer attention. Streamers have all but abandoned Destiny 2 for that reason alone.

The game’s Crucible mode is still in shambles

Additionally, Bungie, in its attempt to bring players back to the game starting with Forsaken, overcorrected in my opinion. Many of the activities, starting with the Black Armory expansion in late 2018, became far too time-consuming. I saw almost all of my friends, who played Forsaken practically daily, get burned out and move on because Destiny 2 began demanding so much of their time.

That is less true now with Shadowkeep and all the ways Bungie has streamlined many of its more obnoxiously grind-y elements. And a lot of the old quests from the post-Forsaken expansions are still available and much easier to tackle now that you’re not struggling against the power cap. But I still feel like Bungie continues to undershoot and then overcorrect in cyclical fashion. I’m worried Shadowkeep will bring lots of players back (and plenty of new ones playing the free-to-play version), only for the next expansion to lose them again.

That brings us to the most important question about Destiny 2, and one Shadowkeep will not reliably answer: where is this game going, and at what point does it stop being worth your time? Bungie has endured a roller-coaster post-launch development cycle to appease die-hard fans and reinvigorate its game. It also broke up with its publishing partner to help forge a new path and do with Destiny what it always wanted to.

By all accounts, that’s panning out. That cross-save has worked as well as it does — despite a massive launch day outage — is nothing short of astounding. That it exists at all, in part thanks to games like Fortnite, is something of a miracle. And for people entering the Destiny universe as free-to-play players for the first time, they’re getting their hands on something that I’ve spent hundreds of dollars on. And I’m not mad these same people are getting that content for free; it’s money I consider well spent for the value I received at the time.

Bungie hasn’t said whether there will be a Destiny 3. We know there will be a full year of expansions after Shadowkeep, because there is an annual pass attached that promises seasonal content through next summer. But part of the pitch with Bungie going independent was that the studio would no longer have to sell units and hit revenue goals that were set by another company.

Does that mean Destiny will become a true service game that lives on for years to come, like World of Warcraft or, in a more apt comparison, its competitor Warframe? We don’t know. And that does cast some doubt on the future of the series. Why would I keep playing this game if it’s just going to get rebooted again in 12 months? As was the case with the final year of Destiny 1 before the sequel’s launch in the fall of 2017. And how will next year’s new game consoles from Microsoft and Sony impact the developer’s plans? We don’t know that either.

For now, though, Bungie is asking its players for trust. If I were asked to make that same leap of faith last year, ahead of Forsaken and when the game seemed to be at its lowest point, I would have walked away. But I’m glad I stuck with Destiny 2, because it’s done nothing but improve in the months since. After Shadowkeep, I feel confident the game will only continue to step closer to Bungie’s grand vision it first conceived nearly a decade ago. And half a decade and thousands of hours later, I can easily see myself playing another five years of Destiny.