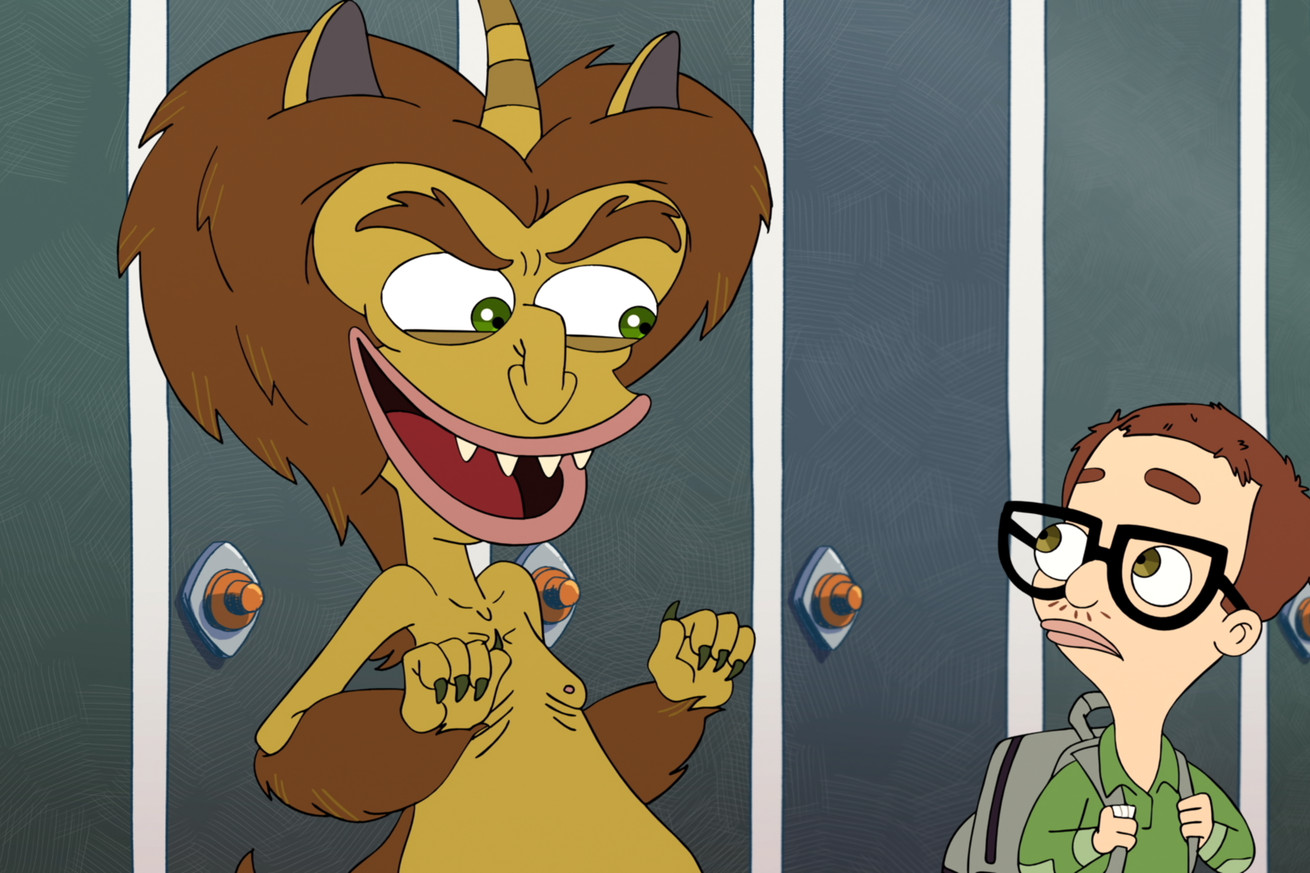 The raunchy Netflix animated comedy Big Mouth started as an absurd yet deeply personal show about the horrors of puberty, from inconveniently timed first periods to embarrassing uncontrolled erections. But just as the show’s theme, “Changes,” implies, creators Nick Kroll, Andrew Goldberg, Mark Levin, and Jennifer Flackett never intended this show to stay static. While it’s experienced some growing pains and still has some painfully awkward moments, it’s developing into a remarkably powerful and entertaining comedy.

Middle schoolers exploring their sexuality is still the driving force of Big Mouth, which released its 10-episode third season on October 4th. But the show has expanded to follow other equally challenging teen issues, like academic pressure, mental health, and the changing dynamics between friends. While the show follows many of the traditional sitcom beats, it’s crafted a rich mythology and personal history for its characters that means new viewers will want to start from the beginning to be able to appreciate all the callbacks and see how much the characters have grown.

The main tension of the season is between best friends Nick Birch and Andrew Glouberman, voiced respectively by Kroll and John Mulaney. Nick was the sensitive smart-aleck to Andrew’s nerdy pervert for the past two seasons, but now he’s gotten more confident with the help of the Hormone Monstress Connie (Maya Rudolph of Saturday Night Live and The Good Place).

Connie joined Nick after he had a succession of much worse monsters. Nick was late to develop, and in season 1, he was accompanied by the crusty, ancient, barely discernible Hormone Monster Rick (also voiced by Kroll). When Rick retired, he was replaced by the overly enthusiastic childlike Hormone Monster Tyler (John Gemberling of Broad City) who Nick banished after discovering he was working with the Shame Wizard (David Thewlis of the Harry Potter films). Both characters were worse for Nick than Connie, but they were also less entertaining as foils. While Connie still delivers terrible advice like encouraging Nick to kiss Andrew’s ex-girlfriend, the extra time with her strengthens the show.

The show’s creative team has also built on the complicated personal dramas that were introduced in season 2 and the surprisingly sweet Valentine’s Day special, providing a payoff for previously underdeveloped characters. Jay Bilzerian (comedian Jason Mantzoukas) was an obnoxious sideshow at the start of the show, perpetually annoying and disgusting the other characters with his obsession with magic and humping pillows. The pillows were anthropomorphized as women, and in one plot that really overstayed its welcome, Jay’s favorite pillow gets pregnant, gives birth to a baby pillow, and runs off.

Matthew (Andrew Rannells of Girls) was previously relegated to a stereotypical catty best friend to Nick and Andrew’s sarcastic buddy Jessi Glaser (Jessi Klein), but he finally came into his own in the Valentine’s Day episode by exploring the hardships of being the only openly gay kid in his small town. That adds even more pressure to his first budding relationship. His new connections come at the expense of Jessi who continues to battle the oppression of Depression Kitty (voiced with an oozing seductive malice by Jean Smart of Fargo and Legion).

Jordan Peele has been voicing the ghost of Duke Ellington, who haunts Nick’s attic, since Big Mouth’s first episode. But the bit has always seemed just a step too weird even by Big Mouth’s standards. Nick didn’t start with his own Hormone Monster, and his visits to Duke always seemed like a poor substitute for the monsters’ running commentary. Duke served a similar function, suggesting Nick could solve his problems through sex and punctuating his advice with historic anecdotes and offputting manic laughter.

But this season, Duke finally gets some highlight moments of his own. His ability to seemingly conjure any other dead celebrity results in a clever musical number about the spectrum of gender identity and sexual orientation, starring Prince, David Bowie, and Freddie Mercury. Nick writing a celebrity book report also provides an excuse for an entire episode set in 1913 where Duke paints a tale of jazz, sex, and the importance of finding your passion. It’s one of season 3’s best stories.

This season, the writers have doubled down on the show’s musical numbers, which vary wildly in tone but are always high-quality. A song in the first episode featuring all the girls in school protesting a dress code meant to protect boys from uncontrollable urges helps set the tone for the whole season. A duet where Jessi and Nick mourn the fact that none of them made it onto their peers’ lists of the hottest people in school, despite their non-appearance-related strengths, is deeply relatable. But the best of the numbers is “Anything Goes in Florida,” a ballad skewering the goofy, genuinely terrible aspects of the Sunshine State, ranging from Spring Break to stand-your-ground laws. It’s a perfect crystallization of the show’s ability to pivot from silly to serious so quickly that it causes emotional whiplash.

The smoothing of the show’s rough edges does make its remaining issues feel all the more abrasive. Kroll voices four main characters and a host of supporting characters, and Big Mouth would be stronger if he killed some of his darlings. His idiot gym teacher Coach Steve has been in every episode, even though he’s a one-note gag who feels like a throwback to Adam Sandler’s 1990s films. Coach Steve was fired at the end of season 2 and is blissfully absent from most of season 3, only showing up in a series of odd jobs. His stint as a Lyft driver is the only Steve segment where the jokes actually hit the mark, via a rambling end-credits monologue about the varied ways ride-sharing can be incredibly awkward.

But any goodwill the character earns there quickly falls away in the season’s penultimate episode where Steve gets a makeover from the Queer Eye Fab Five, who all voice themselves. Big Mouth relentlessly breaks the fourth wall, and jokes focusing on its status as a Netflix show are peppered throughout the season, most bitingly in a jab at 13 Reasons Why. But the Queer Eye episode feels like a 20-minute commercial, and the terrible payoff is that Steve gets his job back, meaning he’ll continue to be a comedic drag on the show.

While the Shame Wizard — the incarnation of embarrassment and self-loathing who was season 2’s primary antagonist — briefly appears when Andrew visits a Men’s Rights group, he’s otherwise absent this season. That’s a disappointing loss, considering how much powerful conflict he stirred in season 2. He’s also missed since because while season 3 has plenty of memorable moments, it doesn’t reach a satisfying climax like season 2 did.

Season 1 of Big Mouth was all about how characters experience the beginnings of puberty in different ways. Season 2 had them coming to terms with their new raging hormones and accepting their new selves. Season 3 feels more like a series of vignettes on a theme. The rift between Andrew and Nick isn’t just caused by hormones but by other stresses, like Nick becoming addicted to the idea of social media stardom. Jay tries to earn acceptance for his sexuality while also struggling with his neglectful home life, and the more structured but loving environment he finds while briefly living with Nick. Missy grapples with anger and her newly aggressive sexuality. Taken as individual bits, Big Mouth’s comedy is sharper than ever, but it could be even better if the creators could keep all of the characters interconnected to better build off the entertaining dynamics they’ve developed over the past three seasons.

The writers try to bring all of these plots together in a final episode where the characters gain superpowers tied to their inner struggles, but the gimmick gets away from the point in a way that makes “Super Mouth” feel incoherent. Season 3 ends with a series of cliffhangers showing that some of the characters are more miserable and confused than ever. Big Mouth has already been renewed for three more seasons, so there’s plenty of time left for the characters and show to continue growing. That process is sure to be as awkward, confusing, and painful as puberty, but so far, the compassion and humor the creators have brought to the process are making the show’s growth extremely entertaining.